In this post I want to get some reviews out of the way before the end of the year. Here goes: 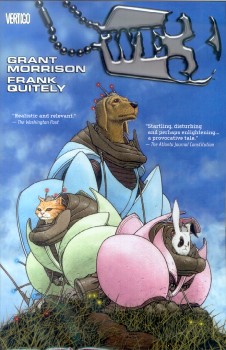 WE3- By Grant Morrison and Frank Quietly is the much hyped tale of animals, men, and morality in the age of machines. I’m pleased to say the book lives up to the hype, a cautionary tale, an ANIMAL FARM for our new, dark century. These two, Morrison and Quietly, have a history of working well together, JLA: EARTH 2, THE NEW X-MEN, and this story is no exception. Two brilliant talents, in synergy… making art, one month at a time. A great read, strongly recommended. A.

Now lets move from this review, to an overview of Morrison’s body of work…

GRANT MORRISON: A LIFE IN HYPERTIME

There are some people who are flag waving members of the cult of Morrison, I don’t happen to be one of them. I’ve stumbled across enough Morrison work I don’t like, that said his good clearly outweighs his bad.

When Morrison is on, really on, he has very few contemporaries, DeMatteis, Moore, Priest, Bendis, Ellis, Gerber, Ross

(Yes, I know he’s an artist. But he’s more than that. He’s very much a visionary. His Kingdom Come is what brought me back to the medium, when I had given up on it, and made the entire medium grow up, become more beautiful and artistic… to keep up with him), a handful of others whose creativity, storytelling chops, moved the medium forward.

When he is on, his creativity and insanity works, and his work makes you glad… glad to be reading comics. Makes you glad to be smart enough to recognize this bastard medium… as being where it’s at. When Morrison is on, paired with an artist that can bring his vision to light, he is rightfully alluded to in the same sentence as Kirby.

In a few scant paragraphs I’m going to try and give you an overview of how that came to be. The highlights that made Grant Morrison one of the most well known names in the business. So hang on, cause here goes:

Morrison has a history of innovative ground breaking storytelling. From his first status quo shattering run on ANIMAL MAN, to his very uneven run on DOOM PATROL, to his later more successful work. 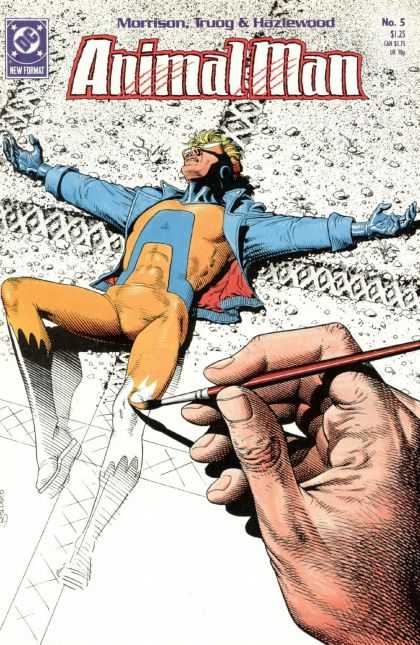 Morrison’s ANIMAL MAN and DOOM PATROL work, morrision’s blue period if you will… the 1988-1989 time frame, while in hindsight looked back on by some as impressive runs; at the time both books failed to garner either critical or commercial attention.

[I have to agree with that lack of acclaim. I personally feel they both stumble pretty badly as cohesive bodies of work, particularly Doom Patrol.

Morrison has a problem sustaining an idea, or keeping his own interest in a title, and therefore his readers’ interest. The best issues of Doom Patrol are the self contained stories. The highlights of his 40+ issue run, being the first story arc, and issues 34 (one of the great issues of all time, hilarious! My favorite issue of the run!), 42(Flex Mentallo, another great issue),43(Why is the Pentagon that shape),45(The Beard Hunter; only Morrison could satire the Punisher and Alan Moore in the same issue! My second favorite issue of the run).

But after issue #45 you can pretty much stop the bus and get off. You can thank me later.)],

Put another way, the books weren’t selling, so for the next five years Morrison would be for the most part out of the limelight, he would be relegated to the odd one shot and the relative ghetto of the British comics scene.

In 1994, the scottish wunderkind, would explode out of the brit scene, back on to the larger American stage, with his signature seres… THE INVISIBLES (A hefty body of work, that I have to admit to not having finished), a series that would cement Morrison in the minds of readers, creators, and critics as a major creator. His first run on the Invisibles would run two years, and when done… DC in 1997 would recognize Morrison’s status as a creator that had arrived… by giving him their biggest title to revamp, JLA.

Morrison’s not quite consecutive run on that title would last over 3 years ending in 2000, probably longer than he should have been on, Morrison as in Doom Patrol showing a tendency to get bored with a title. That said his first year on the title ranks up there with the best work ever done with the characters. Topping it off with the original graphic novel JLA:EARTH 2.

At the same time Morrison used his new clout to get the second and third Invisibles series off the ground. A two year run and a one year run, ending in 99 and 2000 respectively.

Also in this same time period from Jan 97 to Middle of 2000, Morrison also worked on Weird War Tales, Vampirella, and Flash (the last two in collaboration with Mark Millar), along with a host of other one shots and minis. This time period would prove Morrison’s most productive period to date, churning out an astounding body of work, almost all marked by a uniformly high level of innovation and invention.

End of 2000, after 12 years, on and off as a DC writer, Morrison would be wooed into jumping ship to Marvel (his earliest Marvel UK stuff, notwithstanding). Marvel at that time had begun their exclusivity policy, which amounted to hiring popular writers, paying them more and contractually locking them down into only working for Marvel (ie not working for the big bad DC). The age of the superstar writers, and the bidding wars had begun.

At Marvel, Morrison would bring his unique vision into reviving tired concepts and titles, first with a six issue series called MARVEL BOY (a series that despite great art seemed to be something of a misfire), and most notably on his three year run with NEW X-MEN. And around this time Morrison also managed to get in a 13 issue creator owned series called the FILTH, and various one shots.

Middle of 2004 and Morrison, obviously feeling penned in (who wouldn’t after 3 years on an X-MEN Title, for a man of Morrison’s imagination the routine of one title, especially a title as one note and continuity/crossover/editorial heavy as the X-MEN, must have increasingly felt like doing accounting… rather than really creating), jumps ship and heads back to DC.

There he would explode into a rash of creativity and invention, from SEAGUY to VIMANARAMA to WE3 to SEVEN SOLDIERS to ALL STAR SUPERMAN to 52 to BATMAN to WILDCATS to the AUTHORITY; an astounding level of invention that continues to this day and is quickly poised to rival and possibly surpass his pre marvel output. And hopefully we’ll see more stand alone stories from Morrison (which he’s good at), and less of the lengthy, sprawling storyline (which tends to not be his strength). But either way Morrison will remain in 2007 a name… to contend with.