Those of you who’ve followed this blog over the years know I’m seldom at a loss for words.

I came close with this review of INCOGNEGRO. 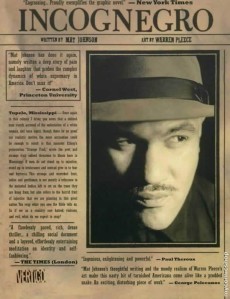 INCOGNEGRO… wow. Anything I say about it will either be too little or too much. You should go into the book knowing very little (my thought on most things you seek to dazzle you) and you’ll get a lot out of it. All you need to know is it’s basically a murder mystery set in Jim Crow America. A 138pg 2008 Graphic novel, I don’t quite know how it avoided my radar, but this tale of an America of nearly a 100 years ago is RIVETING! I read it in one sitting, and went from unsure of it, to offended, to horrified, to chuckling and back again all in a space of pages.

Just am amazing mixture of pacing, scripting, dialog by Matt Johnson and expressive, pitch perfect visuals by Warren Pleece, that initially strikes me as too cartoony but ultimately works, creates a work that cannot easily be dismissed, forgotten, or put aside. I picked up the book for free at the library, but I am buying the hardcover, because it is one of those books (and this is the reason digital will never truly replace books for bibliophiles) that you want to have on your shelf, and own, and thumb through, and occasionally reread. It’s book as comfort as much as content, as talisman as much as text.

Matt Johnson writes as if the ghosts of Hal Bennett runs through him, combining that writer’s unequaled ability to pummel you with horror, then wring from you in the next breath, a sound not unlike laughter. And that ending is FANTASTIC!

My review is for the Hardcover. Use the link below to order your copy today. My Comic Shop is a site I personally use and recommend, and any purchases you do through my links brings me a few pennies which helps keep the blog running. So get yourself a great book and help the site, in one stroke. What could be easier. :).

“I grew up a Black boy who looked White. This was in a predominantly African-American neighborhood, during the height of the Black Power era, so I stood out a bit. My mom even got me a dashiki so I could fit in with the other kids, but the contrast between the colorful African garb and my nearly blond, straight brown hair just made things worse. Along with my cousin (half Black/half Jewish) I started fantasizing about living in another time, another situation, where my ethnic appearance would be an asset instead of a burden. We would “go Incognegro” we told ourselves as we ran around, pretending to be race spies in the war against White supremacy.”
— Matt Johnson, his forward to his book INCOGNEGRO

“That’s one thing that most of us know that most white folks don’t. That race doesn’t really exist. Culture? Ethnicity? Sure. Class too. But Race is just a bunch of rules meant to keep us on the bottom. Race is a strategy. The rest is just people acting. Playing roles.”
— INCOGNEGRO, Part I