There’s some news on the horizon regarding Mark Olden’s seminal series BLACK SAMURAI, as well as other work. I don’t have the thumbs up yet… to break the news, but in the interim I thought it was a great time to re-present this fun and informative interview, to tide you over.

Plus it has been updated with new pics, courtesy of Ms. Crafford. Please Enjoy!

And is it me, or does the new film THE RAVEN bear more than a passing resemblance to Marc Olden’s POE MUST DIE? hmmmm. 🙂 .

The fact that what you are about to read and hear is a YEAR in the preparation, goes to the absurd vagaries of mi vida loca, my crazy life.

But here finally, before the clock turns over on yet another year is my interview with Diane Crafford, on one of my favorite writers, the late, great and incomparable Marc Olden.

We’ll start with the text portion of the interview, and following that the pretty free flowing audio interview. HUGE, HUGE thanks to Diane for her time, her good humor, her anecdotes, and her extreme patience.

1st to set the stage.

Who is Marc Olden?

Marc Olden is a writer I became aware of, oddly enough on an auction site. Being something of a bibliophile I’m always looking to pick up books, and no doubt I was looking for either Warren Murphy’s DESTROYER books, or books by the late great Donald Goines.

And instead I came across this auction of a near complete series of BLACK SAMURAI books by Marc Olden. Being a Blackophile as well as a Bibliophile 🙂 , the title alone, as well as the very impressive 70s art on the paperbacks were enough for me to decide to purchase the books.

So I won the auction got the books, and was… from book one, blown away. This was not the hokey Jim Kelly movie, this was the undiluted source material, and it was pure and gritty, and brilliantly written. I’ve a huge fan of the Warren Murphy DESTROYER books, as well as the James Bonds and the MacK Bolans, but BLACK SAMURAI takes it to another level. BLACK SAMURAI is the BEST of that flooded market that was Men’s Action Adventure Books of the 70s. And the fact that it was so relatively short lived, also makes it a far more accessible body of work, and to my mind, far more prized.

And passion leading to passion, I just became obsessed with collecting all the work, primarily the 70s work, of this somehow inexplicably under the radar writer. Two of the holy grails being the Edgar Nominated POE MUST DIE, and the even more obscure BOOK OF SHADOWS (which I have to thank Diane for really making me aware of).

And reading his books led me to wanting to share with the world more of this, I felt and feel, brilliant, important, and overlooked writer.

So I reached out to the person who was keeping the late Mr. Olden’s web presence alive, the gracious Diane Crafford, and she was both kind and crazy enough to consent to the following free flowing and I believe informative and engaging interview/conversation.

The early part of our interview… the audio does not capture Diane’s, bubbly, fun, immersive personality, so I’m going to transcribe that from notes, and memory as best I can (I have a tendency toward the romantic, so anything that sounds like bs I take the blame for) bullet points mainly, and then we’ll kick into the audio. 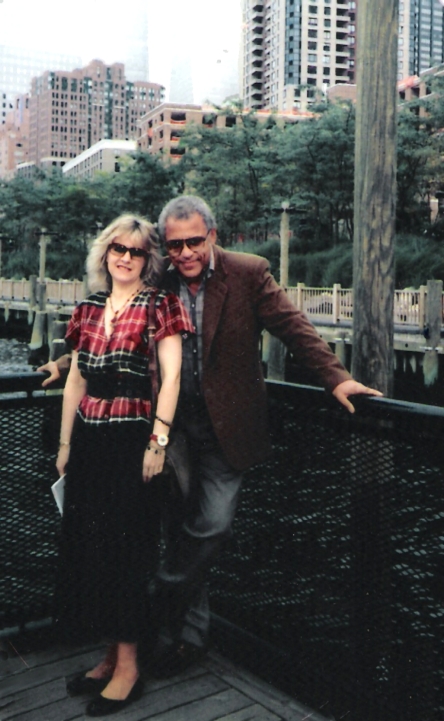 HT: Hi Diane, thanks in advance for your time. We’re here to discuss Marc Olden one of my, and I assume your, favorite writers. Now most of this I got from your site as well as my research: He’s done over 40 books. His first work of fiction NARC a series of nine novels. He also produced the eight book BLACK SAMURAI series, made into a bad movie with Jim Kelly. And POE MUST DIE a stunning immersive novel drenched in period detail.

DC: You do your homework.

HT: I try. Now I’m detecting a bit of an accent, and your name Crafford, Londoner?

HT: Ahh, missed it by that much. Now tell me a little about Marc Olden behind the books

DC: Well he was born in Baltimore and was a press agent before he gave it up to become a writer. And once he chose that road, he embraced it completely. He had a strong work ethic, he wrote every day. His Black Samurai series was written at the same time he wrote the Narc series. It was while writing Narc he got to know guys in Law Enforcement. With advanced degree black belts in Japanese Karate and Aikido, he coached and mentored many members of the NYPD in Aikido.

HT: So his writing was an extension of the man.

DC: Yes. Like every good writer he wrote what he knew, of his passions. And after the NARC, BLACK SAMURAI books, he went into stand-alone novels such as INFORMANT. It did well but was not a best seller.

HT: Going back to BLACK SAMURAI series for a second, what did he think of the film?

DC: He had no input into the film. And resigned himself to it being something distinct from his work.

HT: Well let’s backup a bit, and tell us bit about you and how you met Marc.

DC: -I met him here at New York. He was a press agent for a restaurant, and I was working in film. We hit it off immediately. He had a way of carrying himself. –Later I was in London working for a film Producer, Sidney Dujer. The film was THE TWELVE CHAIRS starring Frank Lagella.

It’s amazing the little decisions that make all the difference. Marc went from Press Agent to writer, writing magazine articles. And then was approached to write a book on Angela Davis. And at that time I was looking for work, and became his transcriptionist. He had a head full of stories, he loved to tell them. And at the center of them was his belief in Justice.

HT: Now how did one of his earliest books, and what I consider not just one of his best books, but one of THE best books, POE MUST DIE come about? It seems a very ecletic work and ahead of its time work, mixing historical fiction and figures, mystery, horror, action, and adventure.

DC: He loved Edgar Allen Poe and he loved Charles Dickens. And POE MUST DIE at its heart is his love letter to those influences, but done as only he could do it. Dicken’s Christmas Carol, all about redemption, at the heart of this elaborately researched and gothic murder mystery,

HT: I can definitely see that. The book is so full of period detail, and authenticity, it puts you there in that place and in that time, of a wilder and younger England and America. What were some of his other inspirations?

DC: He thought Raymond Chandler was the best American writer. He was inspired by Eastern Philosophy through his mother and father (his father was George Olden, an art director). This filtered down to the type of man he was. Very calm, very contained, very brave and strong. I once asked him, “What is it that makes you so together?” and he said, “Good looks and the power of prayer.”And while he said it with a smile, that was sincere, it was how he lived his life. In balance.

“It was a different breed of man who sat in the cherrywood chair, his legs crossed under a cashmere robe, a thin volume on his lap. His graying hair, immaculately groomed, seemed to highlight a strong-lined, somber face… An aura of greatness and elegance seemed to permeate his being, as if his presence lent dignity to the book-lined walls. He seemed like what men should be, but never were.“
….THE DESTROYER: CREATED, THE DESTROYER by Warren Murphy.

HT: You can see that balance in his work. It’s very measured and… sincere. Which is an odd thing to say about fiction, but he wrote fiction with Authenticity.

DC: Yes. All his work was an extension of his interests. Take BOOK OF SHADOWS, he got the idea for that on one of our annual trips to England. He loved history and was a real Anglophile. He became intrigued by the canals that snaked through England, and that was the impetus for BOOK OF SHADOWS about vacationing American’s who stumble across things best left undisturbed.

Okay that brings our text portion to an end. Onto the audio. You’re going to hear a lot of paper shuffling, that’s me jotting down notes, and flipping back and forth in my book, to consult my notes. I don’t think it distracts too much, Diane does a great job. So please enjoy! And bottom line, if you haven’t read anything by Marc Olden, go to Diane’s site and get acquainted. I would also suggest purchasing through her site.

The below audio is a little over 33 minutes,, and the audio has been noise reduced to minimize the sound (my frantic note taking) as much as possible. Not great audio, but definitely listenable, and DEFINITELY informative.

Okay! You can listen to it HERE!