This is a special Wednesday Words Review as opposed to our normal coverage. Enjoy: 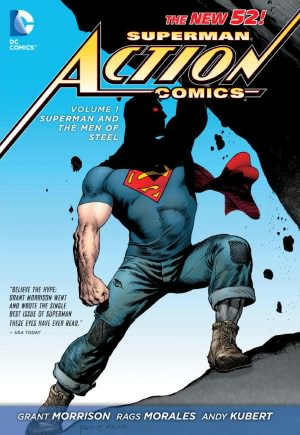 SUPERMAN ACTION COMICS by Grant Morrison- Starts off impressively, but true to just about everything I’ve tried by Grant Morrison it loses its way in the middle, and completely falls apart into uninteresting storytelling by the end. The first chapter is very strong. The second chapter is strong till the last few pages. The third chapter, again strong, but loses it in the last few pages as Morrison tries to build his overarching story, which I’ve come to the conclusion he’s not really good at. He’s a great idea guy, but going from imaginative idea to compelling and satisfying storyline/wrap-up is a leap Morrison has always, in my estimation, failed at doing. He’s the X-FILES of comics.

From issue #4 up is all the over-arching, high-idea storyline, and the problem with it is… it is incredibly uninteresting. And it stays uninteresting till it limps to what has come to be a norm for Grant Morrison, a poorly told, to the point of near incoherence ending. And it is not a point of not getting Grant Morrison, as his cult is quick to jump to, it’s a point of his writing stops being in anyway a compelling and fun story, and feels like a chore and dissertation that the writer himself has long lost any interest in. And the variable art quality doesn’t help. Another Morrison D-. The only real saving grace of the series is the enjoyable, exquisitely written and beautifully drawn backup strips by writer Sholly Fisch and artists Brad Walker and ChrisCross. The backup strips are an easy B+. I wish Sholly Fisch had written the main story rather than Grant Morrison.

Final Grade: D- for the main Grant Morrison storyline. B+ for the Sholly Fisch back up stories. So can’t recommend buying the book but if you can get it for free from a friend or the library, the backup strips are worth a look.

Superman – Action Comics Vol. 1: Superman and the Men of Steel (The New 52)