Let me preface this by saying… I am not a tv guy.

If you’ve followed this blog any, you know that.

I can, and routinely do, go months without watching TV. I in fact do not own a tv. But I do own laptops and quite an extensive DVD collection. I keep abreast of what people are saying is hot or good in TV land, and eventually get around to trying the DVDs.

And usually all these hyped shows… I’m unimpressed.

THE WIRE is another show that I heard so much praise for, and finally watched it cannot hold a candle to its predecessor HOMICIDE.

Typically it’s the British Television shows that I think are currently knocking it out the park. Shows like HUSTLE and ULTRAVIOLET and JEKYLL and TORCHWOOD: CHILDREN OF EARTH. Because their seasons are tight, they avoid the filler and weak episodes so common to American Television seasons.

There are exceptions, a few American shows, that are televison at its finest.

DAY BREAK is one of those shows. 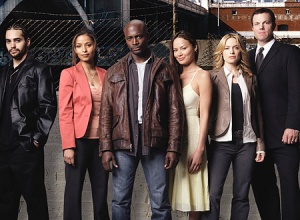 To say it’s 24 meets Groundhog Day, gives you a crude and unwieldy signpost, and ultimately a lacking one. It is those two things, those two vague and well worn themes, but done right and brilliantly and strong for the whole season.

I have things to do, and places to go, and I cannot stop watching the bloody DVDs.

So of course it was canceled in one season.

I mean multi-ethnic cast, strong Black lead character… Oh please cancel me now, and let’s leave on crap like SMALLVILLE, or another CSI or LAW AND ORDER. 🙂

But while it may have only been one season, at least is was a GREAT FRIGGING SEASON!

Try it for yourself. And don’t forget to listen to all the commentaries, pretty great stuff.