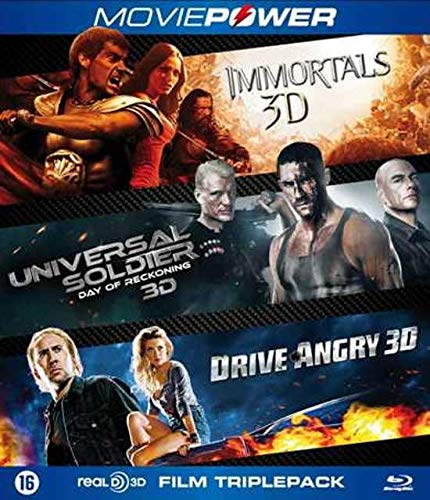 Per my previous post I have jumped into the world of 3D Bluray/Home Projection and I LOVE IT! 3D TV’s being dead, or prohibitively expensive (for the used ones remaining) held me off for a long time. However, I did my homework and research (for months) before acquiring my current system, and for under $1500 ( and potentially under a $1000 if you get great deals) you can all-in [Bluray, projector, glasses] , have a GREAT 3D system.

Let’s start with the under-performers and move up to the home-runs.

THE MAD MAGICIAN Indicator release, was so far the biggest downer. The B&W 3D was not a pleasant experience.

Also another B&W one that is a difficult watch, is DRAGONFLY SQUADRON. Now the 3D in this is actually very, very good. Lots of depth and separation between objects. What hurts the film, is it is very noisy and grainy, and I don’t typically have an issue with grain. GUN FURY 3D was grainy, but the color presentation with it, had no problem with the grain, and the 3D was phenomenal; however with the DRAGONFLY SQUADRON in 3D, the grain and pops in the film feels likes tiny explosions going off while you are attempting to watch the film. A shame because, as I mentioned the 3D is very impressive.

I found the HOBBIT UNEXPECTED JOURNEY pretty underwhelming in 3D.

I heard lots of praise for RESIDENT EVIL AFTERLIFE’s 3D, however finally watched and the 3D is uneven. It comes and goes. Sometimes it has depth, sometimes it does not.

TRANSFORMERS THE LAST KNIGHT is the same way, moments of effective 3D, and sequences that are basically 2D.

Those are probably the biggest UNDER-PERFORMERS so far.

So the Winners so far…

I already mentioned THE LIFE OF PI and GUN FURY 3D as must own 3D films. Both of those films are solid in terms of top-notch 3D presentation. Those are both what i would call demo worthy discs. Solid A+ 3D films.

Another demo worthy disc would be PACIFIC RIM in 3D! Holy cow! That is a must own. Another A+ 3D film.

I would also say STAR WARS FORCE AWAKENS 3D is another great 3D film. Lots of wonderful depth, and one notable striking pop-out. A solid B+.

I’ve only seen a few minutes of IMMORTALS, DRIVE ANGRY and UNIVERSAL SOLDIER:DAY OF RECKONING, but initial impressions is that the 3D in all three of those films, is phenomenal. Especially UNIVERSAL SOLDIER:DAY OF RECKONING (which is the best Universal Soldier film, largely because it is nothing like the previous films. It is Universal Soldier by way of APOCALYPSE NOW). directed by John Hyams I believe, I love this film in 2D, and in 3D it is even better. Initial impressions they are all easily B+, but that grade may go up once i watch the whole film in 3D. DAY OF RECKONING in 3D is a must own. Click on the images to pick up copies while they are still in stock. 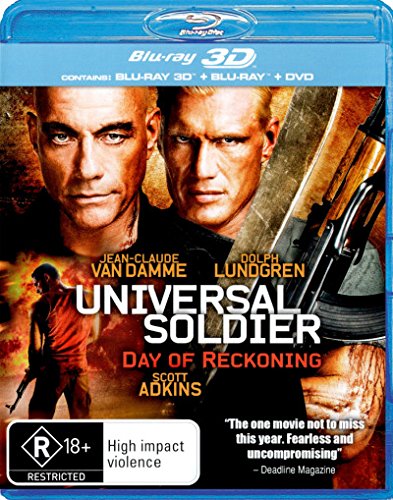 MAN OF STEEL in 3D, is better than I expected. People have been lackluster in reviews regarding WB/DC 3D films, but I was pleasantly surprised. While there are no pop-outs in the film, there is nice depth for a good portion of it, especially the more sci-fi aspects. Overall while not an essential 3D disc, the film is more enjoyable to watch in 3D than 2D. And considering I am not a fan of this film (I think it is one of the weakest Superman films, after the first 2 Reeves films, and below SUPERMAN RETURNS), it has its good parts (not the [minor spoilers] video game massacre of millions, and the stupid tornado sacrifice scene), and it is overall a good 3D to have in your collection. I’d say a C+ in terms of its 3D.

Today i will probably sample KONG SKULL ISLAND in 3D, as well as SANGAREE 3D and HERCULES 3D, and I’ll bring you in the next installment what I thought of those.

Also i have some IMAX Docs in 3D coming, so I’ll review those once I view them.

And remember guys, like, subscribe and share this post. If I get 7 likes, on this post as well as the first part, and I will break down the hardware that makes up my system and how I have it setup. Till next time, Gals and Guys, be safe out there!

According to AMG (courtesy of Fandango), Jean Claude’s first film was 30 years ago in 1983 with the romantic french comedy MONACO FOREVER.

So to celebrate 30 film years of Jean Claude Van Damme we’ll start with this simple article listing his filmography over these thirty years, along with random notes.

NO RETREAT, NO SURRENDER (1988) – The film that put the world champion kick-boxer turned actor on the map, here playing a villain

CYBORG (1989)- A panned film when not being overlooked, this sci-fi flick mixing a dystopian future with lots of action, while undeniably low budget and of its time, I personally am a huge fan of.

SUDDEN DEATH (1995) – A good movie, perhaps one of his best from that period, it possessed a ‘DIE-HARD’ premise to it, it nevertheless underperformed at the theaters.

MAXIMUM RISK (1996) – His first of many impressive collaborations with Director Ringo Lam, Lam was the first director to get a real performance out of Van Damme, and a fantastic and very nuanced and heart-felt performance it is. It would signal the changing of the guard for Van Damme’s career as his drawing power as a mainstream action star would start drying up, and smaller budget, direct to video films would be the order of the day, but Van Damme as actor would increasingly emerge. MAXIMUM RISK is one of my favorite Van Damme films.

DOUBLE TEAM (1997)- Tsui Hark, following in the footsteps of fellow country-men John Woo and Ringo Lam, chooses Van Damme to make his Hollywood directorial debut. Unfortunately the film is a creative and commercial misstep, that would signal the beginning of the end to Hollywood’s love-affair with Van Damme.

REPLICANT (2001)- The 21st century has arrived, and the rise of home video and DVD makes direct to video (DTV) productions possible. Alternative avenues to get your movie out there for studios that cannot get or afford theatrical distribution. DTV would allow Van Damme, and other abandoned once Hollywood darlings (such as Seagal and Snipes)to continue making movies. REPLICANT, a merely serviceable film, is the first of Van Damme’s next phase of his film career.

IN HELL (2003)- A fantastic Van Damme performance and film, helmed by Ringo Lam

WAKE OF DEATH (2004) – Another fantastic DTV film. This and IN HELL showing the older Van Damme not just a better actor than in his youth, but making better films. As both of these films are better than anything he produced in his Hollywood years, with the exception of MAXIMUM IMPACT and SUDDEN DEATH.

JCVD (2008) – This is the movie that really revitalized Van Damme’s image, and by so doing, his career. Part action/heist flick, part psuedo-documentary, part bio-pic, it’s a deeply personal film that uses innovative 4th wall breaking cinematography and exciting story and action, and a wrenching performance by Van Damme to make it one of Van Damme’s most critically lauded films.

In many ways JCVD signals the third phase of his career, his return to mainstream prominence while continuing to also do his DTV work, a two pronged ‘best of both worlds’ approach where Van Damme is increasingly the action equivalent to Brando (in terms of longevity) to younger actors’ Pacino. He brings the name and gravity and they bring the youth and the bulk of fight scenes. Most notably this dynamic is seen in his very successful, recent collaborations with the amazing Scott Adkins.

UNIVERSAL SOLDIER: REGENERATION (2009)- A direct result of JCVDs popularity, sporting an exciting new director in John Hyams and littered with brutally talented young MMA performers, this is a sequel that completely improves upon its inane and mediocre predecessors. It is, without reservation, a great action film.

SIX BULLETS (2011)-A strong first half, goes off the rails at the end with the parents unbelievably becoming Mr and Mrs Rambo.
DRAGON EYES (2012)-
EXPENDABLES 2 (2012) – A rare return to villain status for Van Damme. Good to see him back, thanks to Stallone, in Hollywood’s good graces.

UNIVERSAL SOLDIER:DAY OF RECKONING- Van Damme’s third collaboration with John Hyams, while sporting very little Van Damme, is a home-run and illustrates a bit of that passing of the torch that is going on between him and Scott Adkins (with that whole Apocalypse Now vibe running through it). I loved REGENERATION and DAY OF RECKONING is even better. Part Horror, part sci-fi, part thriller, part action, it is some of the most exciting film-making I’ve seen in a while. Really quite impressive.

And 2013 and 2014 has other projects in the pipeline for Van Damme, and whether these projects are met with accolades or are derided, the given is Van Damme himself shall continue to be a charismatic and watchable screen presence, that gives his all.

I look forward to seeing the work yet to come.

Brought to you by my MONARCHS OF MAYHEM Indiegogo campaign.

If you like this blog, definitely go view and support our MONARCHS OF MAYHEM campaign. There are only a few days left and we only need a 147 of you to contribute at the $35 level to make the book happen! We can do it! 🙂

Go view it and support it here! Thanks!