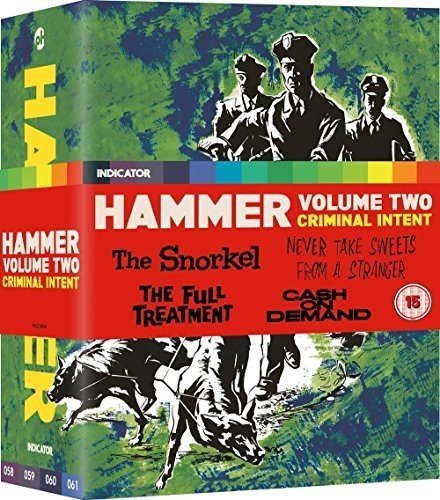 All these videos are great. Quick word on this last one. CRITERION, I guess bouyed by the competition from other labels such as ARROW and INDICATOR is really starting to step their game up. I think they are aware that while Criterion has made its name by providing quality curated, feature packed releases of significant titles; today some of these newer labels are really, not just on Criterion’s heels, but have surpassed Criterion in some areas. ARROW has better regular releases, with tons of features, and great books (as opposed to Criterion’s booklets in some cases), INDICATOR has absolutely jaw dropping boxsets. And then you have Shoutfactory and MillCreek and Universal killing it with their line of Steelbooks. There is just a lot of great competition out there in 2020, which is surprising considering how everyone keeps shouting the sky is falling for physical media. I have to tell you, I’ve been in this game quite a while, the physical releases we are getting today, are absolute works of art. Here in 2020 this is the golden age of Blurays/Physical media.

And CRITERION is appropriately stepping up their game. Because this RED RIVER 2018 Blu-ray reissue, of a 2014 release, that Cinema Dave introduces us to… is a must own. Though even here, you can argue that, they shortcut in that none of the special feature are new or original to this release. They use several year old interviews and commentaries, as opposed to ‘new for this release’ features that you do get with companies like ARROW and INDICATOR. Still I do see CRITERION putting out ever more impressive releases to maintain their position, as the most august name in Physical media.

If you found this post helpful, support by buying stuff here! Thanks!

Why anyone continues to use facebook, after repeated abuse of the public’s rights and reason, remains beyond me.

ACLU sues feds to get information about facial-recognition programs

And not just the municipal/’public’ cameras. Yes your smart phone,  WE, Xbox, Ring and wifi security cams, VR headset, all that stuff you are using for fun or your security, is placing all that data of your face, body, and your surroundings in huge databases, that someone that is not you, gets to sift thru and use. Welcome to MINORITY REPORT. :).

Trump Is in Denial About Getting Booed Again, This Time at a UFC Fight

Arrogant Stupidity and prideful ignorance, is the enemy of reason.

My first introduction to Henning Mankell’s detective Kurt Wallander is with the Kenneth Branagh helmed WALLANDER BBC series. I found those shows visually striking and emotionally intense. Only recently have I likewise become introduced to the earlier Swedish series starring Krister Henriksson (earliest episodes dating from 2006, with the latest episodes being in 2013).

There is a degree of fatalism and nihilism in the more slick and stylish BBC reworking of WALLANDER that is absent from the earlier Swedish television series. And I feel that that absence is to the earlier show’s benefit.

While the Swedish series is no less a captive and mirror of the forlorn land it depicts, there is in the original series and in the captivating and world wearied yet bemused performance by Krister Henriksson a welcome sense of hope, of optimism even in the face of those who have forsworn hope. As such, despite or because of its understated nature, there is something more endearing in the Swedish WALLANDER, something easier worn.

Whereas the BBC version of Wallander is a different animal all-together. First its scale is far grandeur than the Swedish version, essentially each season comprised of three feature length movies, with approximately two years between seasons; 2008, 2010, and 2012 respectively.

Add to that Branagh’s wonderful portrayal of a man ever more broken is superlative. However that degree of depression can be taxing to view. To the BBC WALLANDER’s credit it is a distinct and different take from the Swedish version they were going for and achieved, so it can be viewed as its own thing rather than simply a remake.

All that to say you can watch the original series and the BBC series and see two distinct and divergent shows, each deserving of your time. But if pressed regarding the version of Wallander that I enjoy the most, I would have to choose the Krister Henriksson series.

While the BBC version has amazing direction and cinematography, powerhouse acting by its lead Kenneth Branagh, and a wonderful score and introduction (reminiscent of the equally compelling LUTHOR), thematically I prefer the less angst ridden and less dire Swedish version. Its low-key delivery making for less hyperbolic viewing.

Grade: WALLANDER BBC series gets a grade of B/B+, and the CANAL Swedish version edges it out with a solid grade of B+.

Next up I’ll sample the Rolf Lassgard WALLANDER episodes and bring you my take on those.

This review is on the original UK series BEING HUMAN. The quick one sentence breakdown on this series? This five season series, goes on two seasons two long.

The first three seasons tells the unconventional tale of a werewolf, and vampire, and ghost that end up sharing the same house. REAL WORLD for the universal monster set. Alternately funny and imaginative and dramatic the series over three seasons sports first and foremost solid casting, actors who are magnetic and likable and you want to follow their journey. That’a a significant point, that I think gets missed by too many shows, the casting and the chemistry of the cast.

Shows like AGENTS OF SHIELD sport bland cookie cutter casts with negative star power, and then have an uphill battle making the audience care enough to follow the boring cast. Thankfully for the first three seasons the UKs BEING HUMAN had a cast with chemistry, great writing, wonderful performances, and excellent effects all building up to a great cliffhanger third season finale.

For all intents and purposes that’s really where the show ends. After that  a pitiful fourth and fifth season limps out with largely a new cast and atrocious writing. The saying ‘jumped the shark’ is never truer than with season 4 and 5 of BEING HUMAN UK. My advice get the first three seasons, and let this series end in your memory with that intriguing cliffhanger and erase all belief that a season 4 or 5 was ever made (much like season 2 of SPACE 1999 and season 4 of BATTLE STAR GALACTICA [new series] should likewise be forgotten). Grade: Great for seasons 1 to 3! Price Blurays below.