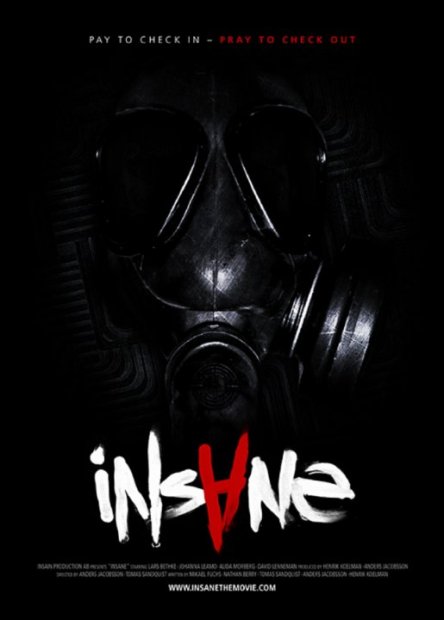 INSANE- A 2010 film by directors Anders Jacobsson & Tomas Sandquist, INSANE makes the most of its single location setting, wringing for the most part passioned performances from its nubile young actresses and quirky actors and marrying that to some effective and creepy camera work and one of the more demented boogie men since Hitchcock’s Norman Bates.

However I have no interest in seeing women butchered, I’m not a slasher fan, I’m a mystery/thriller fan… so around the 2nd butchered girl, I’m losing interest in this film. I want to fast forward to the comeuppance of the villain. But thankfully the pattern breaks slightly with the third girl which keeps me watching to the end.

Unfortunately it is a distasteful ending, to a distasteful movie. The movie is better directed and performed than most slashers, unfortunately it succumbs to the slasher rule of super-powered killer, and moronic brain dead victims. This movie goes so far as to try to make the bad guy ‘relate-able’ by given him the worn back-story, ‘I was traumatized as a child’. As if that is ever an excuse for being a detestable adult yourself.

I despise these movies where the slasher is made the hero, some franchise character; which is why I was never a fan of the Halloween or Friday the 13th Films, The first Halloween is great, but they should have stopped there.

Another failing of INSANE is its over reliance on gore. I think the filmmaker is very effective at creating a creepy atmosphere, and effective stalk and chase scenes, but I feel this all goes out the window when he needs to play to the bloodhounds by giving us ever more egregious examples of the destroyed human form.

As someone who thinks the human form is beautiful and a work of art and a fragile achievement, I don’t relate to seeing people destroyed or dead rather than alive. That’s not the draw of a roller coaster, mangled bodies and twisted piles of steel after a crash; the draw of a roller-coaster is the chase, and the momentum, and the perilous high of the unknown and slightly out of control. And that’s the same draw of a good thriller/horror movie.

People remember the shower scene in PSYCHO because it’s a beautifully photographed, masterfully directed moment of madness, redeemed from mundaneness by surreal, stylistic direction. We watch films to see the work of filmmakers, and throwing blood and guts at the screen does not a filmmaker make.

There is nothing in INSANE, while definitely inspired by PSYCHO, that will be remembered as vividly or hauntingly as PSYCHO. 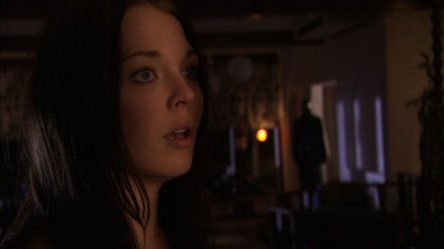 However INSANE has moments of style and perspective that try to elevate it from the usual brain-dead slasher flick but these moments get aborted with the distasteful gore scenes. And the ending is more of this copycat ode to murderers as supermen killers that get away with it.

That concept, ‘villains winning’, never appealed to me. Never will. I know life is filled with examples of villains winning, however art should be better than that. I was raised to believe in Justice, and at the very least Crime and Punishment.

I was raised to believe in Heroes, people who are there to rescue maidens from dragons, which why for me Michael Mann’s MANHUNTER is a far superior movie to Demme’s SILENCE OF THE LAMBS, and why I have nothing but distaste for the HANNIBAL tv show.

I think the things we glorify as a society are the things we become. I’ve always believed in glorifying heroes, however in our DEXTER, SHIELD, HANNIBAL, BATES MOTEL, VIKINGS generation we get the opposite of that. And don’t get me started on VIKINGS(they went around murdering, torturing, raping, and stealing, largely from unarmed villages and settlements, yet now we have a show that darts completely around this to portray Vikings as sensitive, women’s lib supporting, misunderstood mariners. Mendacity. The effing Vikings made the Nazis look benign, yet we have a TV show glorifying and whitewashing them).

INSANE is part of that cinema geared to the morality of monsters, and that is its greatest weakness. INSANE has moments of true creativity, but by the end it is in strict formula territory.

By the end of INSANE I wasn’t better for watching it, and if the thing you spend over an hour of your life watching doesn’t in someway elate or enrich you, than what the hell is the point.

Summation [and possible spoilers]: A good cast and some effective camera work, let down by a derivative script and moronic ending. Less concern with making a super powered franchise character and more concern with making a good film would have served this movie well. Yeah when we get the upper-hand over a murdering maniac is the time to worry about our relationship. Really? It is brain dead lapses like this that ultimately makes this a waste rather than a winner. Grade: D.

Where are they Now: As of this writing the directors have not done another movie. Of the cast, David Lenneman (Fred in the Swedish series REAL HUMANS), Alida Morberg, and Lars Bethke have had sporadic bit parts since, with most of the cast doing nothing since.