Well I got up with the sun still low in the horizon, I could see it from my window, and I grabbed a passel of books and my laptop, parked my chair where the sun would hit it, and set out to combine reading with updating this blog.

I’m reading for the first time the 2007 Moonstone Anthology THE SPIDER CHRONICLES edited by Joe Gentile.  It consists of 19 short stories by some great writers. Among them Steve Englehart, Chuck Dixon, Martin Powell, Ron Fortier and others.

Reading the fun introduction by Comic Book legend Denny O’Neil.  And the first story, Martin Powell’s CITY OF THE MELTING DEAD, takes you right into the action, with a very cinematic tale of the Master of Men.

Continuing the Spider love, a pulp character I was not familiar with (beyond reference to him as a poor man’s Shadow) I also picked up the 2009 Baen publishing paperback THE SPIDER: CITY OF DOOM.  It’s actually a 600 page paperback omnibus, that is comprised of three Spider novels, namely: THE CITY DESTROYER, THE COUNCIL OF EVIL and THE FACELESS ONE, written by Norvell Page. I had some trepidation going into these novels based on some reviews on Norvell Page’s writing, but I’ve decided to see for myself. So wish me luck. 🙂

“If you’ve read any of Norvell Page’s Spider series, you recall he took what was meant to be a simple imitation of the Shadow and immediately swerved left to careen through Crazy Town with it. Those stories are so over the top that I used to put them down sometimes for a “What the hell” moment…. it’s difficult to overstate how whacky and exciting they are. On the other hand, don’t expect a neat tidy resolution at the end. This isn’t Ellery Queen, where every detail fits together perfectly. Page apparently made it up as he went, starting plot threads he completely forgot and taking off in different directions halfway through. You’d have to read the stories to fully understand what I mean, but reading a Norvell Page Spider story is like being in a car hurtling down a mountainside in the wintertime, the brakes out and the driver unconscious and some sort of large animal growling in the seat behind you. That’s THE SPIDER.”— Dr. Hermes Live Journal

I also picked up the graphic novel NEONOMICON by Alan Moore, Jacen Burrows, and Antony Johnston (yet once again, I’ve been hoodwinked by ‘positive’ Amazon reviews, by reviewers with no taste or sense).

It’s something I’m immediately sorry I bought. Mainly because it starts off with the exceedingly unpleasant, needlessly slur and epitaph laden, and pretty poorly written THE COURTYARD by Antony Johnston off of a Moore story/script. I’m not really interested in listening to a bigoted sob go on endlessly (the protagonist of the book), if that’s my thing I’d just listen to Fox news all the time. :). Also while I appreciate publisher Avatar bringing us esoteric and adult books, their art leaves a bit to be desired. I’m not a fan of their artists, in this case that would be Jacen Burrows.

So yeah, add a story I don’t like with art I don’t like, and this equals me not being a fan of THE COURTYARD at all. The fact that THE COURTYARD takes up half the book, means by the time I get to the NEONOMICON story, I’m so soured on the book I just don’t care. But I drag myself through it and you know what, I’m sorry I wasted the effort. A lot has been made of the sex, and violence and racism, yada yada yada. But really the book is defined by two words I had hoped not to associate with Alan Moore… boring and stupid.

Being a fan of much of Moore’s 80s and 90s work (even into the 2000s, I think his FROM HELL is one of his best works, right up there with WATCHMEN), it gives me no pleasure to say the following. Moore’s NEONOMICON, his love letter to HP Love craft, is just inane, pathetic writing from a writer who had been one of the best. And I’ve lost all respect for The Bram Stoker committee for giving an award to this title. Best Graphic Novel of the year?!! Did they just see the names Moore and Lovecraft, and decide this must be literary? Are you on Crack?! What a load of crap! NEONOMICON comes across as the bland, pedestrian work of a hack. And that’s a shame to have to say. But it’s the gospel. It’s not worth buying people, it is not even worth renting. This book is getting returned.

Now a graphic novel I’m reading that I do like quite a bit is SILENT HILL PAST LIFE from a company called IDW that is just exploding onto the comics/graphic novel scene. Written by Tom Waltz the story is capable but the selling point is the sublime art by Menton 3. It’s very reminiscent of the multi-media effects that David Mack is known for. Few pages in and very happy with the book so far.

Conspiracy of the Planet of the Apes 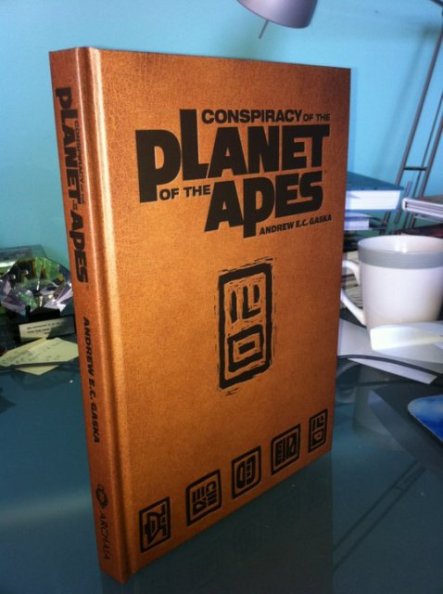 And finally one I’m several chapters into is Andrew E.C. Gaska’s CONSPIRACY OF THE PLANET OF THE APES. Initially when I ordered this book I thought I was getting a graphic novel, and was a bit put off to discover this was a prose novel, with spot and occasional full page illustrations.

But that reluctance was short lived once I started reading it. Gaska’s CONSPIRACY OF THE PLANET OF THE APES is GREAT!! I’m not even a Planet of the Apes fan, but was just enthralled by Gaska’s engrossing re-imagining of this well known story. I should finish it today, as it will probably take precedence over everything else.

One more thing on this book from publisher Archaia Press, it comes with a beautiful slipcover by living legend Jim Steranko, but once you take off that slipcover, underneath is this sumptuous faux leather book, with gorgeous patining and typography. Call me a twisted bibliophile but the feel of this book is grand. It feels like… luxury. Try and get that aesthetic from your digital book. :). This is definitely a writer to watch.

So that’s what I’ve been reading this bright Saturday. What about you gals and guys? Feel free to leave comments about your recommended reads today. Thanks!!

p.s. If you like the books I mention and are interested in purchasing, definitely use the handy-dandy links provided. Come’on guys I know how many of you view these posts, and it’s a good number, however people clicking on the links has dropped a bit, even as the number of viewers has increased. So gals and guys support the blog, by buying stuff you were intending to buy anyhow. Using the links makes a huge difference, and is a win-win situation for everyone. So Thanks in advance! 🙂