While a two year old speech, today was my first time hearing/encountering it.

While politically I have my issues with Arnold Schwarzenegger, I do not have an issue with this speech. Clear and inspiring!

PODCAST OF THE DAY

I’m listening to this podcast at work, and generally I’ve tried this particular podcast show before, and previously it just didn’t engage me.

However this time, this particular episode they are discussing items I’m familiar with such as Linux Mint vs Ubuntu. Cinnamon vs Mate, and the general look at the Linux Desktop options /environment.

Based on their review I’m actually going to download and try Linux Mint after a hiatus of several years.

You can download Linux Mint 15 here. (Going along with my previous post, if you are sick of Windows, then here is another Linux Distro you have as an alternative to Microsoft)

I’m also loving their take on Youtube ‘Youtube is the sewer of the internet… should turn comments off.” as well as their view of Microsoft’s X-BOX “X-Box needs to die”. Viewpoints I entirely agree with, and the reason I don’t use or frequent YouTube or own an X-Box or Wii.:).

And on a funny note… “the house that looked like Hitler”?

Just found this podcast episode informative and even fun listening. Take a listen and see if you agree,

“You will be brought to account Gavrok, and made to pay for your actions.” -Doctor

“Give me Delta, and I will give you… your life!” -Gavrock

“Life?!! What do you know about life, Gavrok?! You deal in death, lies. Treachery and murder are your currency. You promise life, but in the end it will be life that defeats you!” -Doctor

“You have said enough. I have traversed time and space to find the Chimeron queen. I will not be defeated.” -Gavrok

“You will. I came here under a white flag, and I will leave under that same white flag. And woe betide any man who breeches its integrity!” -Doctor

—from DELTA AND THE BANNERMEN

I just adore the above exchange. Lines delivered only the way Sylvester McCoy as the Doctor, could deliver them. Raising even a ludicrous episode like the Bannermen (which I am aware of the dislike for, and can understand the dislike. It is all over the place) to something I find quite enjoyable. I mean “woe betide” come on, you have to be pretty good to use that in a sentence and make it work! 🙂

Who…. is The Most melodious Doctor Who?

All of the actors , well most of them, that have portrayed Doctor Who, have impressive voices. Part and parcel of the role is being able to ramble off this scifi and apocalyptic jargon, not just competently, but believably. With authenticity.

You have to be able to sell to an audience… urgency and belief.

And all of the doctors to varying degrees were good at this, but I would say the top 3, are Tom Baker, David Tenant and surprisingly enough Sylvester McCoy. I think Sylvester McCoy, because he had the bad luck to be on the sinking ship of Doctor Who when it sunk, and follow up the inglorious run of Colin Baker, is often overlooked, or judged out of hand as the bottom of a rather steep slide into cancellation.

I myself had that impression of McCoy, based I admit unfairly, on nothing more than his rather clownish appearance. But his episodes finally watched what amazes is his… commitment, his intensity and particularly his delivery. 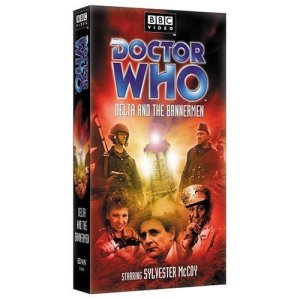 “There are worlds out there where the sky is burning, where the sea’s asleep and the rivers dream, people made of smoke and cities made of song. Somewhere there’s danger, somewhere there’s injustice and somewhere else the tea is getting cold. Come on, Ace, we’ve got work to do.”
― Sylvester McCoy

That quote sums up everything that made McCoy’s Doctor, and McCoy’s era (once he got rid of Mel [another poor John Nathan-Turner companion] and teamed up with Ace) one of the strongest since early Tom Baker.

So he gets my vote for the most Melodious Doctor Who. 🙂

DELTA AND THE BANNERMEN is typically not mentioned on anyone’s best of list :), but it is definitely a three part story worth finding a copy of.

The first episode starts a bit slow, but stick with it because it becomes a pretty great three parter, and McCoy earns his word-smith title, delivering great lines, and making them even greater with his delivery. Check him out on the cliffhanger of Episode #2 I believe, and you’ll see what I’m talking about.

That episode and the four part REMEMBRANCE OF THE DALEKS is must own McCoy era Dr. Who. Definitely recommended.

Doctor Who: Remembrance of the Daleks (Special Edition) (Story 152)

Doctor Who: Delta and the Bannermen – Story 150

Doctor Who: Remembrance of the Daleks (Special Edition) (Story 152)