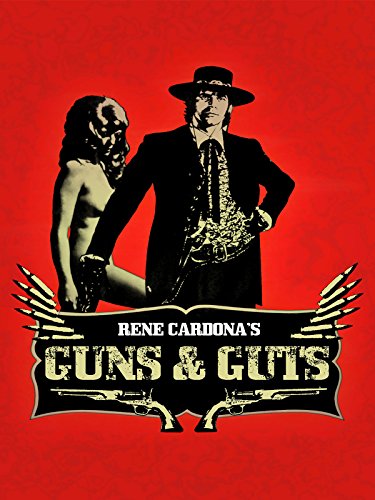 GUNS & GUTS (1974): I didn’t know what to expect with this 1974 Spaghetti western directed by Rene Cardona, but 8 minutes in and I am sold on it. I really enjoy the economy of its storytelling, as it almost wordlessly moves you from jail break, to vendetta hunt. What would be perceived as a weakness in most any film, the lack of any captivating stars as the protagonists (the two main protagonists are almost uniformally nondescript), here gives the film a terse veracity.

The sense that these would be the nondescript, amoral men who survive by the gun. There is something strangely unformulaic in following the adventures of men, who in other films would be the fleeting henchmen and antagonists. And there is a dry wit throughout.

And the film is not entirely without stars, Jorge Rivero had made a name for himself as something of a Mexican sex symbol, and in this film as the nameless Pistolero, a sophisticated, whore obsessed gambler and gunfighter, brings the charisma.

the film gets a little long in the tooth in its 2nd act, you could easily lose a good 20 minutes, but still not enough to derail it. it is no for a few dollars more or WILD BUNCH (which it slightly emulates, clearly cardona paying homage to the westerns of peckinpah and leonE), but overall a Compelling fun little film, with a sting in its tail. Grade : B-.

‘Its hard to find a good ” Django” film after Sergio Corbuccis original, even though, after its success, there were hundreds of films which boasted themselves with the title “Django”. Sadly most of these films used the name as a marketing strategy to boost ticket sales. The main characters often had nothing to do with the Django that Corbucci established, sometimes they didn’t even have his name attached to them.
“Django, Prepare a Coffin” is one of those rare films that use the existing character, with all its quirks, and is able to bring him to life in a new scenario with a new actor.’

Really enjoyed this 1968 Spaghetti Western, ably directed by Ferdinando Baldi (TEXAS ADIOS, BLIND MAN). Originally written for Franco Nero (the star  of the original DJANGO), when he was unavailable they offered the role to Terence Hill (born Mario Girotti) because of his striking resemblance to the popular Nero.

But Terence Hill proves himself in this movie a capable leading man of his own, with a more easy and affable screen presence than the talented but oft explosive and hyperbolic Franco Nero. Hill’s more subdued take is perfect for this imaginative story of double and triple crosses.

DJANGO UNCHAINED- Tarantino is hit and miss for me, but this trailer looks interesting. What really sold me with it though, is that little cameo portion with Franco Nero, the original Django. Easily my favorite part of the trailer. And Franco Nero looks surprisingly the same. So yeah, this is one I’ll be there for come… the Mass of Christ.