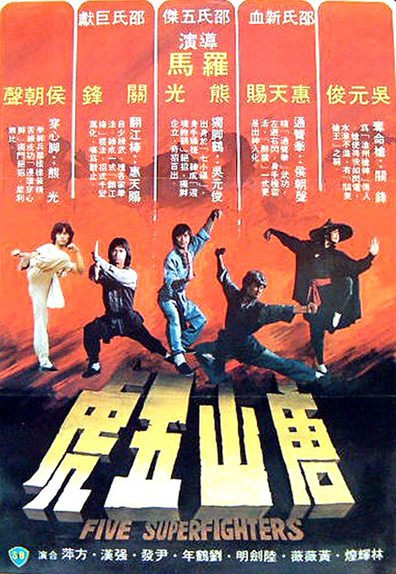 Currently watching the Shaw Brothers fun FIVE SUPERFIGHTERS, that starts typically enough, with a  guy who styles himself THE CORRECTOR OF BAD KUNG FU :), and he just goes around picking fights with every martial arts school, he comes across.

It is a common plot in these movies, but this one wastes no time getting to it. Nicely filmed, well staged fight scenes, and good editing. And there are nice little flourishes in this film from 40 years ago that I haven’t seen before. One of the Kung Fu teachers is a woman, and she makes tofu for a living. It is nice to see the traditional steps of making Tofu, which is very much still relatively new in the west.

Add to that these widescreen remastered prints on Amazon, look WAY better than these films ever looked in the theaters or on TV back in the day, and you have an enjoyable streaming watch for the day.

SPOILER: Read only after viewing the movie…. The ending of this film there is a bit of a revelation that raises the film up a notch for me. Initially through most of the run-time, the ones seeking revenge come off as petty and mean-spirited as the antagonist of the film. Particularly the Teacher, who devolves into a drunk after back to back losses to the Antagonist. Going so far as to attack his friend when he is drunk.

However in the end fight you realize that  (again huge SPOILER) all throughout the movie he was devising a new style… DRUNKEN BOXING, to beat his unbeatable nemesis. This film tackles the origins of Drunken Boxing. A nice little twist, so that ending and the beautifully choreographed fight scenes, and the almost painterly use of color, moves this up to a solid B/B+. 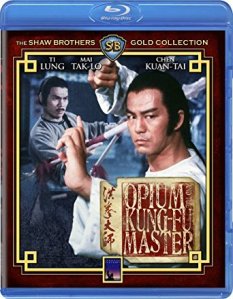 THE SHAW BROTHERS tends to be thought of as a maker of period/classic Kung Fu Films, and while that is their bread and butter, there is a wealth of diversity in the Shaw Brothers’ Output that isn’t readily apparent.

But once you start diving into their catalog you find a wealth of diversity in genre and period and storytelling.

The Message/Anti-Drug  Movie was a staple of Nancy Reagan era politics. She the bandaid to her husband’s cartel creating foreign policy that was flooding the inner cities with white death.

In OPIUM AND THE KUNG-FU MASTER  you find the message movie wrapped in great sets, cinematography, performances, script and stellar fight scenes. Enjoyable and addictive movie from beginning to last superb fight scene.

Watch it via your Roku or Fire TV and catch it free courtesy of AMAZON PRIME. The print on Amazon prime is in superb hd quality and is the most affordable way to see this movie. the bare-bones bluray is unfortunately quite expensive.

however, it is definitely one to own/have in your collection if you can swing it. it is one of the best shaw brother movies. 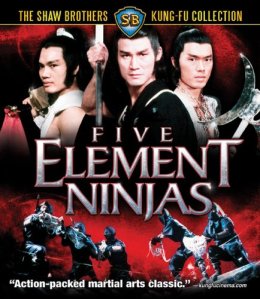 FIVE ELEMENT NINJAS (1982)- Some people are a fan of these Shaw brother movies of the 70s and 80s (the company is said to go back as far as 1924), I could never get into them. I’ve seen bits and pieces of them and was never really interested. Most of them filled with broad slapstick, or syrupy soap opera that tends not to translate or interest.

Give me a good modern KUNG FU KILLER or BLOOD AND BONE or JOHN WICK or RAID any day. With few exceptions the period stuff leaves me cold. That said I’m happy to say FIVE ELEMENT NINJAS (a later day Shaw Brothers production, 1982) is now one of those exceptions.

Wow, this is extreme but non-stop exciting from first minute to last. Simple story of a martial art school having to prove itself best, but the twist on this film is the intro of Japanese ninjas against Chinese kung Fu, and the simply insane levels of fight choreography and blood letting on display here. It’s not a short film, but I could not take my eyes off the screen.

Plus the research the film did to integrate weapons and uniforms actually used in that period from the Japanese, I found very interesting. All in all a no-brainer to watch on Netflix, and one worth graduating to buying on DVD.