Here are some of the deals that are foremost on my radar this weekend, and may make it onto your radar:

Here’s a pretty nifty selection of unique foam core posters! The convenience of a frame without the weight and the mounting hassles. View them here!

If like me you’re a fan of owning classic 1950s scifi and fantasy pulps, this is a great weekend on Ebay. Check out the selection here!

It’s a good weekend to pick up David Mack Kabuki posters and prints. You can find a great selection here!

And for Simpson’s TREE-HOUSE OF HORROR fanatics this is a great weekend to pick up the excellent comics. Check out the various offerings of goodness here!

And finally if steam-punk fob style pocket watches are your thing, then this is a great weekend to be surfing Ebay. Check them out here!

Check back next installment for more selections!

“Tis sweet and commendable in your nature, Hamlet,
To give these mourning duties to your father:
But, you must know, your father lost a father;
That father lost, lost his, and the survivor bound
In filial obligation for some term
To do obsequious sorrow: but to persever
In obstinate condolement is a course
Of impious stubbornness; ’tis unmanly grief…
Fie! ’tis a fault to heaven,
A fault against the dead, a fault to nature,
To reason most absurd: whose common theme
Is death of fathers”
— King Claudius
The Tragedy of Hamlet, Prince of Denmark
Act I: Scene II 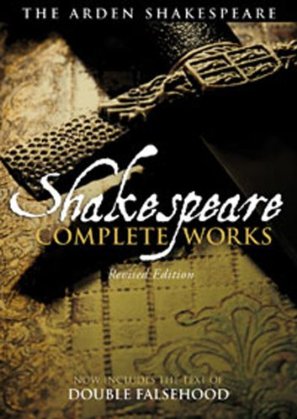 Book Description
Publication Date: December 15, 2011 | ISBN-10: 1408152010 | ISBN-13: 978-1408152010 | Edition: Revised Edition
This revised edition of the Arden Shakespeare Complete Works includes the full text of Double Falsehood, which was published in the Arden Third series to critical acclaim in 2010. The play is an eighteenth century rewrite of Shakespeare’s “lost” play Cardenio and as such is a fascinating testament to the original. A short introduction outlines its complex textual history and the arguments for including it within the Shakespeare canon.

The Complete Works contains the texts of all Shakespeare’s plays, poems and sonnets, edited by leading Shakespeare scholars for the renowned Arden series. A general introduction gives the reader an overall view of how and why Shakespeare has become such an influential cultural icon, and how perceptions of his work have changed in the intervening four centuries. The introduction summarises the known facts about the dramatist’s life, his reading and use of sources, and the nature of theatrical performance during his lifetime.

Brief introductions to each play, written specially for this volume by the Arden General Editors, discuss the date and contemporary context of the play, its position within Shakespeare’s oeuvre, and its subsequent performance history. An extensive glossary explains vocabulary which may be unfamiliar to modern readers.
The Arden Shakespeare Complete Works

If you could choose only one book, today the obvious choice was Shakespeare. I woke up with words from the bard, floating in my head. So enjoy this installment’s selection and come back next time for more of… Wednesdays Words!

I’m doing something a bit different for this WEDNESDAYS WORDS, selecting one work to review. This week’s review is on GRAPHISTES WORLD ARTBOOK 01.

So go here for that review.

And yes I am completely exhausted, and this keeps me from missing a Wednesday. 🙂

Can’t put anything pass you guys. Next Wednesday I’ll make it up to you guys and gals with a full WEDNESDAY WORDS.