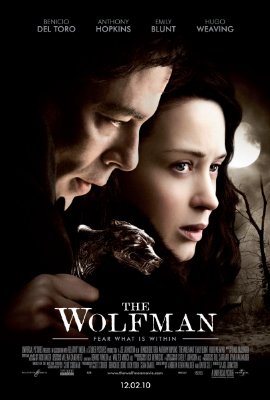 Lawrence Talbot: Are you expecting a war?

Singh: A Sikh is a warrior of God. He must always arm himself against evil.

The quotes come from the 2010 Joe Johnston film, WOLFMAN. I was a huge fan of this film when it hit the theaters a couple years ago, see my original review here, and have been meaning to pick up the unrated Blu-ray Director’s Cut for sometime.

I own very few Blu-Rays, I find on a whole it to be only a marginal quality difference to DVD, and all other things being equal, I’m unwilling to shell out more for a Blu-Ray

The exceptions being a movie deserving of the extensive and elaborate special features and dissection/discussion that a Blu-Ray can bring to bear.

I find the WOLFMAN to be one such film. Unlike many I was a huge fan of the film in the theaters, and I’m happy to say the Blu-Ray experience, with the Director’s Cut, only solidifies my enjoyment and praise for this film.

I won’t get into specifics of the film except to say the additional 15 or so minutes of the Unrated Director’s cut helps to make more cohesive and strong a film that did suffer from unevenness and feeling rushed. Particularly Benicio Del Toro’s unfairly maligned portrayal, is expanded and fleshed out, as well as his relationship with his father played by Sir Anthony Hopkins.

They both, in my opinion did well in the theatrical version, and shine in the Unrated Director’s Cut. And all the parts are likewise… raised. 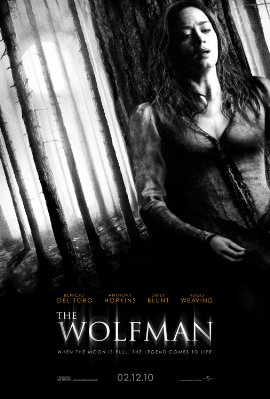 Lawrence Talbot: Why did she do it?

Sir John Talbot: She struggled with life, as we all do. She lost.

Now picture wise, the WOLFMAN Blu-Ray is a negligible improvement over DVD, owing much to how it was shot, it’s a muddy, subdued, grainy type of film that does not play to the strengths of Blu-RAy.