ALFRED HITCHCOCK HOUR was a followup to the far more well known ALFRED HITCHCOCK PRESENTS, except true to this revival’s name it offered hour long tales of mystery and suspense.

Rarely seen, or referenced, this series tends to languish in obscurity in comparison to its far more popular and well remembered sibling, AHP. Which is unfortunate because, for the most part I am finding the hour long time-frame (that could easily feel padded) being effectively used by the host of talented writers, directors and stars involved. Not in all cases of course, some episodes do fail or feel overlong, but so far the majority of the ones I have seen, are satisfying and compelling additions to the output of the great Alfred Hitchcock.

Case in point, RIDE THE NIGHTMARE.

Directed by Bernard Girard (an unknown to me Director, who seemingly spent the bulk of his career directing various Television shows, the movies that are credited to him at the end of his directing career, seem poorly received critic wise, but all sound intriguing to me, and worth a look, especially based on how impressed I am with the visuals in RIDE THE NIGHTMARE) and with a screenplay by the great Richard Matheson, that he adapted form his own novel, RIDE THE NIGHTMARE is a gripping, exciting, amazingly directed episode of television.

Beautifully lensed by cinematographer William Marguiles (a relatively prolific DP in late 50s thru the early 70s, primarily in television) , from the first shot I was asking myself, “who the heck directed this? It looks stunning!”

From evocative low angle shots, that make the ceilings loom above us like the hand of doom, to 270degree close-up pan around an embracing couple, to a series of doorways the character walk through as they quietly discuss their relationship’s immolation (the doorways at dutch angles to represent a world no longer reliable and steadfast, but rather menacing and predatory)… the episode enthralls.

And for an unknown tv episode from 1962, to invoke those impressions on someone watching it for the first time, 60 years later in 2022… I think says much about the visual language of the episode. It also says much about its star, Gena Rowlands.

Known for her later lauded pairings with her husband and paramour (their relationship had that type of oxymoronic duality, and iconoclastic fire, both on and off screen, that he could at once be her husband, and at once be the seducer who swept her away) John Cassavetes; Gena Rowlands, who at the time of this writing is still with us, in this episode (the first of three yearly episodes she would do for ALFRED HITHCHCOCK HOUR) commands the screen with her beauty and her presence. In RIDE THE NIGHTMARE she offers a beguiling performance, that well foreshadows, while giving us a less damaged version, of those later legendary pairings with Cassavetes.

Also with great performances by genre stalwarts Hugh O’Brian and John Anderson — this is a brutal little bit of unheralded television noir, that builds to a [mild spoiler, skip to next paragraph to avoid it] surprisingly near apocalyptic ending.[end spoiler]

The plot has in the 60 years from there to here, been reused countless times, even in 1962 was slightly formulaic, but what was not and is not formulaic… is the craft that it is told with. That had, and still has, the power to rivet.

These shows can be viewed via streaming. Either free if you can deal with the criminal # of commercials (I can not), or via purchase on (typically) an episode by episode basis. I chose neither of those routes and purchased the entire series on DVD to watch at my leisure.

To get your copies go here: 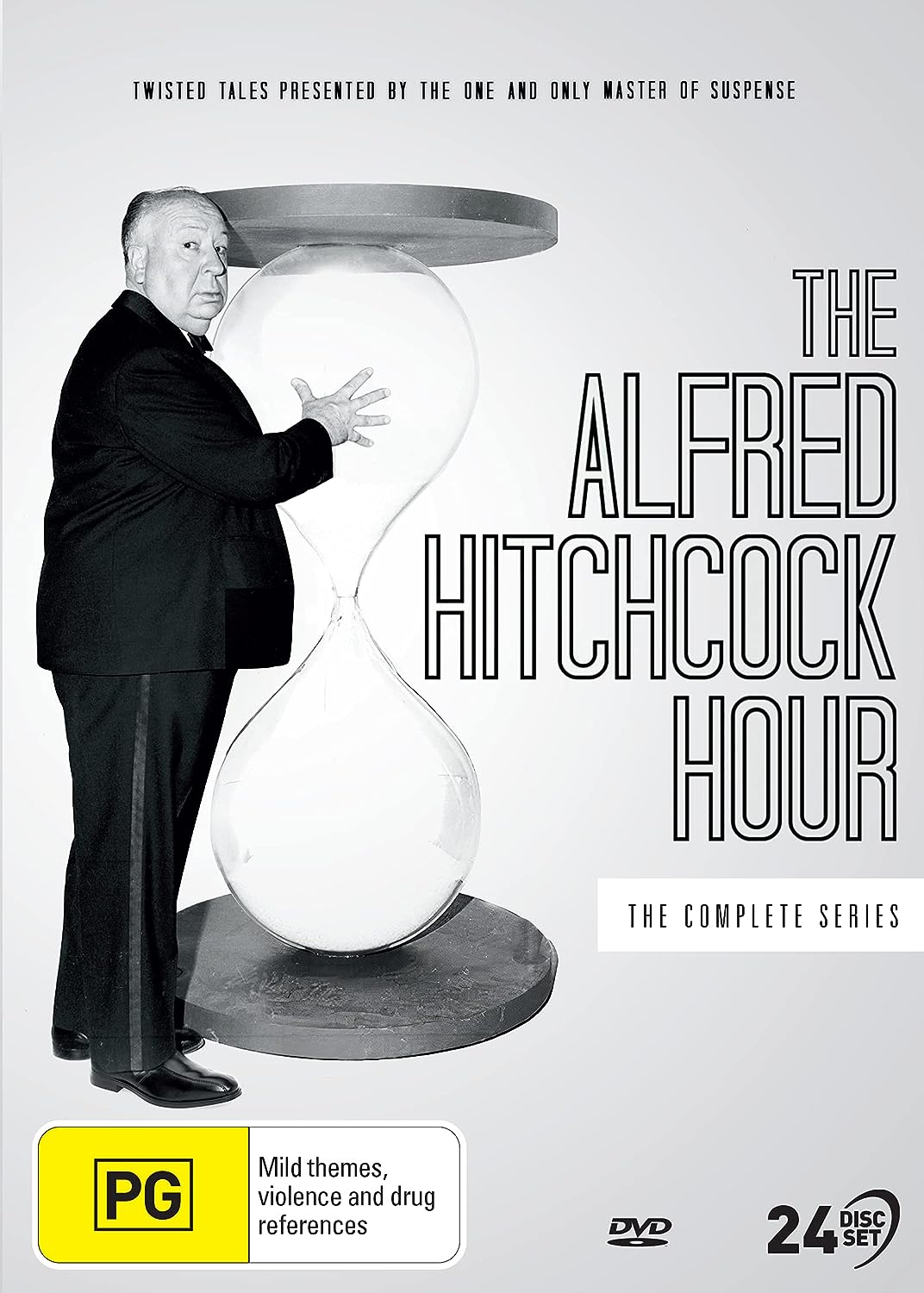 Thanks for looking, and click the image above to purchase. you get a great item, and this blog earns a few appreciated pennies to keep the proverbial lights on.

that’s it for this segment. Oh, and for those of you staying for my rant… read on. The rest of you come back next time, and be well!!

Very enlightening. I happen to be a big fan of digital and streaming… In its place.

As the whole world races to embrace ever more gatekeepers on everything the individual touches, it increasingly becomes clear that you can not buy, or sell, or read, or watch, or listen to something whether in your house or your car, without a log of what you have consumed and when you consumed it being stored somewhere, approved somewhere. Something about that does not agree with me.

Something about not being able to buy or sell without having the mark, whether the mark digital or the mark proverbial, something biblically off-putting about that :).

I tend to like being off grid for my entertainment when I can, when I choose. It is the iconoclast in me. I resist the religion of hegemony and the glory of social media in all things.

Here Endeth the Recommendation and the Rant!

It was the film THE INCREDIBLE SHRINKING MAN that did it, put the name Richard Matheson on my radar.

I don’t know if any writer can claim to be as hauntingly adapted to film as Richard Matheson. Sure there are more oft adapted writers (Stephen King- speaking of who, you can see a definite similarity between the two writers. Matheson a definite influence on King’s introspective style ), there are even better adapted writers (Cornell Woolrich), however there is something in the viewpoint of Matheson’s writing, in the nature of it, that lends itself to filmmakers and films, committed to making us ruminate long, and dig deep.

His I AM LEGEND in all its forms has been cinema gold. That lone THE INCREDIBLE SHRINKING MAN film remains a timeless masterpiece, a 50s scifi property of somehow existential dread and implications.

I mean what it is it about a Matheson property that sets it as clearly distinct from the herd? In the oft predictable genre field, Matheson’s work while not ignoring the cliches, somehow side-steps them, somehow is always intimate and personal dissections of us. If for Shakespeare the play was the thing, for Matheson it was the people. It was what they said of themselves, and what they said of us.

Despite the premise, it’s always character that carries the day in a Matheson property.

Which brings us to… HELLHOUSE. HELLHOUSE in all its various forms captivates. The successful THE LEGEND OF HELLHOUSE starring Roddy McDowall being an example (which bares a striking similarity to the Robert Wise film/Shirley Jackson novel THE HAUNTING). The film is such an erudite genre film, informed and informative, and passionate about us, an atypical ghost story to be sure.

Which brings us to the audio book. Narrator Ray Porter does an excellent job of convincingly occupying the diverse cast of characters, creating for us a compelling world. However that said, Matheson’s main protagonist, the scientist Dr. Barrett, becomes so pig headed, and stupid, that by the third part of the 8 part audio drama, I couldn’t take it. I wanted to reach into the audio book, and kill the guy. UrrrrGGHHH!

To hold onto his preconceptions and prejudices in the face of staggering evidence to the contrary, what Barrett does, is not science. It is in many ways dogma, something very akin to religious mania, but just supplanting blind faith in a God, with blind faith in scientific process (God by another name). Dude is crippled, but in the head, rather than the body.

Seriously the guy was so frustrating, like these idiots in slasher films who stay in a haunted house, or makeout at a grave yard. You’re like… “yeah you’re too stupid to live.” So by the third chapter it was frustrating me too much to continue listening to it. I might try finishing it later, but any book that loses me in midstream like that, I can give you my take on now. Cause even if the remaining 5 chapters are brilliant, it is not going to help. Once I lose interest or concern or even compassion for the characters… I’m done.

So a well read book, Porter’s delivery is completely compelling, and it moves from scene to scene without padding, without fluff, but my praise of Matheson’s characters aside, it is the character of Dr. Barrett that loses me.

I can’t keep company with staggeringly pig headed people. Not even for the length of an audio book.

So definitely worth a listen, but if you have a temperament like mine, you may want to skip out on buying (especially if it is an encrypted WMA file. Screw that nonsense). Try it out at your library for free, or borrow it from a friend.

Upcoming Richard Matheson Audio Book reviews will be I AM LEGEND and DUEL.