I don’t want to give a fuck about Fox News. I would like it to not be my concern.

But to echo the THIRD MAN, “we do not choose our concerns”. We are born into our times, and must either be shaper or shaped. Producer or product. Labeler or Labled.

I prefer striving toward the former.

Falling down going forward. Fighting all the idiocies and hatemongers and muckrackers of our age.

There has been a pattern going on too long now, of right wing interests attacking any person of color (be that color Black, or Brown, or Pink) who will not cowtow to their ever more bigoted and totalitarian line. From mayors and governors, elected by many people, being removed from office by the machinations of a klannish and goosestepping few, to mass-media, particularly the ‘news’, as ever more aggregious sounding board for voices of hate.

Here are some other voices, offering the news you won’t hear from Fox:

MOVE ON — I particularly like the coverage on a Senator Simpson and his ‘stance’ on Social Security recipients. Amazing. 🙂

BOYCOTT FOX NEWS site –site is a little wacky, but I quite like his list of Fox sponsors to boycott. Done and Done. 🙂

DEMOCRATS.COM? –I’ve lived long enough to see the culpability of both parties. Many democrats are acually conservatives in hiding. And a few republicans are actually a throwback to the progressive, abolitionist leanings of what their party was before being hijacked by racists post the reconstruction. But even if Democrats as a rule, don’t walk the talk, I at least like the fact that this site at least talks the talk.

Another BOYCOTT FOX site – Pretty packed site. Definitely worth taking for a spin!

“You have been sleeping. You have slept too long.”
—ROS 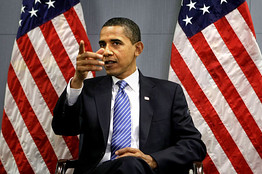 I respect President Obama, to an extent.

The position he holds.

And more, the composure of the man that holds it.

But that said he is a tool.

Not as big a tool as Bush had been, or McCain would have been.

But he is a tool.

And he is being used by business, by his corporate backers to rob America blind.

The stimulus plan, going further in debt to get out of debt, is a bad idea.

The only people who will profit are the big businesses that continue to bankrupt and raid this country, making money in America, without having to pay anywhere near their reasonable share of taxes ( some pay no taxes at all, and take billions out of America).

You want to turn around America’s recession and economic turmoil, then repeal the blank checks that the Bush administration gave to big business that allow them to offshore jobs (ie eliminate America jobs) and still make staggering revenue from America, yet pay no taxes.

So saving America is simple.

It’s that simple. A 13% flat tax rate to every company that generates revenue from America, and mandatory American labor quotas and America would not have a deficit or a recession.

The answer is to make big business pay.

Big business has led us to this precipice, and on top of the 1.4 trillion (two 700 Billion expenditures in 2008 ) already paid to business for being incompetent and placing us here, President Obama and the Democratic congress are leading the American people down a path of further denigration to big business, and further stratification between rich and poor [And if you will look at the Democratic controlled congress, the democrats are largely stocked with conservatives. I noticed this in the 2008 election, while I voted for Obama (the lesser of two evils) it was clear the sane choices, the liberal choices, for some of the lesser seats… were republicans (not all, but some, and I voted accordingly].

Look at the god damn voting record of the person running.

Before we’re all out of time.

America doesn’t have another 850 billion dollars to give away to big business. To support companies that are crippling us. You will only further sell generations not yet born into financial bondage to bail millionaires and billionaires out of the natural aftermath of their greed, by rewarding their greed.

This is not the way.

Let them pay what they owe. Like other countries, mandate usage of domestic labor for companies that do business in their shores; and also mandate the elimination of tax loops for business (not the granting of further tax loops, which is what Obama’s insane Stimulus package offers).

I respect President Obama to a point.

But that point ends, where he sells out, like Bush before him, the welfare of this nation, to corporate masters.

And to do it anyway, shows a man with too little grasp of history. And too little recognition of the fact, that he and not his backers will be remembered for the crimes done under his watch.

Like Colin Powell he will be left holding the bag.

I said as much, if you will remember in my earlier discussion about presidential candidates. But I had hoped… I had hoped he could be more than the strings that bind him.

Less than a month into his reign, and the Gaza Strip is in flames, and the corporate wolves are lined up at your door.

So obviously, my hopes were… misguided. Though I would still like to believe he will rise to the challenge of his times. But this Stimulus package is a falling down, not a standing up.

Because they will come up again.

Begging like dogs for your bone, and counting on your laziness and stupidity, not to even remember how they screwed you last time.

Counting on your stupidity.

Learn their names. Those who voted, and prepare to vote, your rights away.

Learn their names, and prepare for them… a day of reckoning.