I was raised to believe there are a few things every working man needs.

I think they help…  not guarantee, but help… set up a young man… to aspire to be a good man, and a man of use, to those around him.

I believe in the seven goods.

Today’s purchase recommendation of the day, revolves around good #5.

I’ve carried a good pocket knife with me for decades. Briefly in the boy scouts, than occasionally in the military, and relatively constantly in civilian life. It’s a daily carry and essential to me in my work and personal life. And I lump multi-tools in with knives.

Anyhow I’ve had a Spyderco knife for years, followed by a Kershaw Clash knife for years. They are both splendid working man’s knives. For me (even though it is out of fashion these days) an old fashioned  tip-down, half drop point, half serrated, blacked out blade, remains the height of functionality and usefulness. Open mail, open boxes, strip wires, get out of a stuck seat-belt, removing tie-wraps, even as a prybar in a pinch. 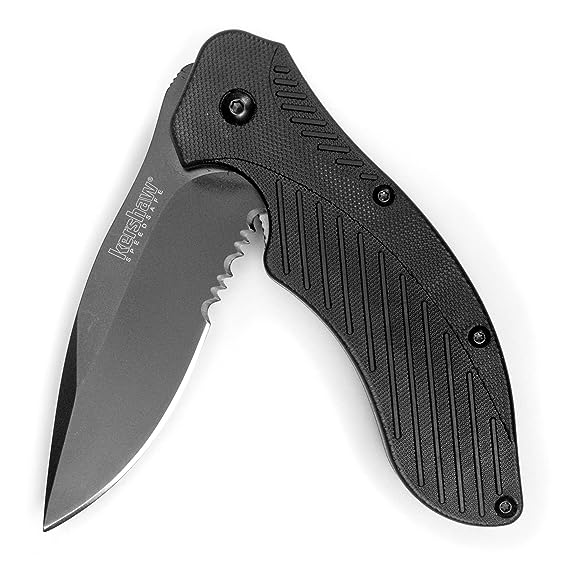 KERSHAW CLASH Get yours here!

I’ll do a list later of my top 5 KERSHAW knives, but click here to browse them yourself.

There is a reason why the Kershaw Clash is one of the best selling pocket knives of all time. It’s not titanium, it’s not on ball bearings, it’s not the metallurgy composition of the moment,  it doesn’t have a rad pocket clip, but what it is… is easily one of  the best pocket knives ever made.

And no Kershaw is not paying me to say this (Hey Kershaw… Call Me! 🙂 )

In a day where pocket knives are undergoing something of a resurgence, and in large part because of social media, and streaming and youtube knife communities, knives today are being made as sought after collectibles arguably even more so than functional pieces. Knife prices are skyrocketing, as more and more companies, just like car companies, are gearing a segment of their market to those with more money than sense. So pockets knives these days can run hundreds to thousands of dollars.

I personally think once you go over the $150 mark, for a pocket knife, you are paying  for the wrapping paper, rather than the product. But each to their own.

But a man does not live by utility alone.

Sometimes you get a thing, because it calls to you, and everything else being reasonable, the cost, the fit, the functionality… you answer the call.

There is no other knife I NEED besides the Kershaw

But I recently found a knife i wanted. Because it was a thing of beauty.

And it is not the HINDERER or THE CHAVEZ or the ABSTRUSE.

According to articles, some of the people who aren’t just rich, but stay rich, are frugal purchasers. Every purchase has to sustain or keep its value. Very few of the people who maintain wealth through generations, buy without an eye to value.

So, when there is a Kershaw Clash in the universe, paying 10 times what the Kershaw Clash costs for a knife that is not ten times better, and may not functionally be better at all… does not compute.

That $150 limit, kicks in for me. And that limit amount is different for everyone. That price point where acceptable bumps up against a waste of money.

Chinese Knives, as China more and more embraces the benefits of capitalism in a socialist country, and as more and more of American production is off-shored , the quality and status of Chinese Knives has risen, to the point where they are making desirable quality knives at a great price point.

So it wasn’t the multi-hundred dollar Hinderer or Chavez or ZT knives that called to me with a combination of beauty and aesthetics that are beyond the Kershaw Clash, but also at an acceptable value point.

It was a company from China called Two Sun. And it was a specific knife.

I think the pictures say it all.

TWO SUN makes a lot of knives. In my opinion the TS 102 is the finest looking one they make, and the one that called to me.

Please use the links, as purchases made thru them is the best way to keep the proverbial lights on for this blog. Also like this post if you found it useful and subscribe. The 2 seconds it takes you to do that, is really appreciated.

Now the fit and finish on the knife are stellar. Beautiful in person. However it is not without minor issues out the box. It comes over oiled, which will need to be addressed. Also there was a minor speck, scratch on the blade. The one I received had a weak action/deployment, you have to give it a bit of wrist to fully deploy.Because of the extra oomph you have to give it the flipper tab can become rough on your index finger. The pocket clip, while stunning to look at, is so tight that out the box, getting it in to your pocket one handed, not so much, You’ll probably have to work in the pocket clip so it is a smooyh one hand seat and unseat into your back pocket.

The pluses do outweigh the speed bumps, visually it is a showstopper. the feel is solid metal, no plastic here, with a little muscle memory you can get the deployment to work consistently for you. I love the perfect centering and that the blade will smoothly drop shut. And lastly, out the box it is SCARY sharp. It is “you need to respect this knife at all times” sharp. My Kershaw which, functionally, as a pure work knife, EQUALS OR beats this knife in every area, can not hold a candle to the TS102s sharpness.

So report card: In terms of Quality Control, the TWO SUN could use a little work, making sure the blade arrives without any sign of wear, not over oiling it, making sure the action is set properly for reliable full deployment. Those issues taken into account at the $70 price point the knife is a no-brainer of a purchase.

It is today’S and this week’s recommended knife purchase!

And I wanted to do a comprehensive study of other peoples best and worst lists of 2014 to make sure this one wouldn’t repeat the obvious, and offer instead a unique summation.

Think you’ve seen everything of note 2014 had? Well think again. When doing research for this article I determined there was a ton of films in 2014 deserving of a watch; far more than 2015 is offering.

And thanks to streaming you can try before you buy a lot of these titles.

So without further ado:

THE MOST OVERRATED MOVIES of 2014

AND WRAPPING THIS INSTALLMENT UP, MOVIES STILL ON MY LIST TO SEE

Thanks To the following sites for bringing some of the above films to my attention. Hope you have found this list helpful, and feel free to shoot me an email or comment with any you think I may have missed. Enjoy! :

Way Too Indie’s Most Overrated And Underrated Films Of 2014

A GIRL WALKS HOME ALONE AT NIGHT – This is a drenchingly romantic and exquisite film with a soundtrack to die for. One of the most sumptuously beautiful “horror” films of all time, and to call it a horror film is to undersell it. This is more. This is a parable that defies simple genre. A sublime bit of movie making, fueled by masterful sound design and cinematography, and patient, stylized and phenomenal direction, with echoes both Lynchian and Murnauistic.

Writer, directed Ana Lily Amirpour with one film has catapulted herself into the ranks of “Must See” Filmmakers.

Most films don’t live up to their poster or their hype (I’m looking at you BIG BAD WOLVES and BABADOOK), I’m happy to say A GIRL WALKS HOME ALONE AT NIGHT absolutely does.

I just saw it for free courtesy of Netflix, and this is one I HAVE to own in the highest quality Blu-Ray available. Ideally with commentary and special features. It is that impressive of a debut.

And run, do not walk, to get the Blu-Ray at the link below:
A Girl Walks Home Alone at Night (Special Collector’s Edition Blu-ray)

THE FIFTH HORSEMAN IS FEAR- To go by reviews on IMDB and AMAZON as well as various critics sites this Czech film is supposed to be a masterpiece. The recently departed Roger Ebert who I agreed with in some things called it.. “a near perfect film.”

Having watched it I have to say… not so much.

While I understand its historic significance in being an early filmic examination of life under an oppressive regime, I found its execution falling far short of its acclaim.

And as someone who is a fan of classic cinema and consider films such as THE THIRD MAN, and ODD MAN OUT and THE CRANES ARE FLYING, historically significant and brilliant films, THE FIFTH HORSEMAN IS FEAR is not a brilliant film. It has moments of interesting cinematography that unfortunately gets lost in the unfinished bones of a movie, a movie that is more exercise and experiment than finished film. I found THE FIFTH HORSEMAN IS FEAR tedious rather than engaging; and the screeching and overwrought performances and dialogue, felt false and empty.

I respect the film’s courage for trying to say something of import, given the perilous nature of when and where the film was made, but I have to say I don’t think the film says it well. Not today, and not even upon its release.

I don’t think anyone can accuse me of not being an artsy, sensitive guy. But even I have to call bs on Aronofsy’s BLACK SWAN. Having finally seen it, talk about much ado about nothing.

It’s one of those movies, finally seen, that I’m very happy I didn’t pay theater prices for.

I mean it’s not a bad film, it is just not a particularly strong one. It is what it is, an opera film meets REPULSION with allusions to PSYCHO, and some gratuitous sex tossed in to make you think this belongs on the big screen rather than the lifetime or scifi channel.

Ehh… I’m being perhaps a bit harsh, but I do feel it’s a bit of a twilight zone episode, padded to feature length. It’s a very sleight movie, that once it completes… is almost immediately forgettable.

Grade: C-. If thrillers that utilize unreliable narrators is your thing, then give it a rental. Otherwise… try something else.