We don’t need no stinking preorder!’

Little bit of a bastardization of the famous line from the great john Huston directed, Humphrey Bogart, Walter Huston led movie, TREASURE OF THE SIERRA MADRE. 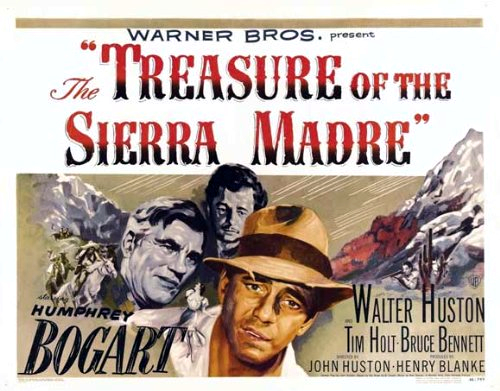 One of the best films ever made, and a must watch if you have, in an age of Disney Blockbusters, never seen this quintessential bit of Americana. From 1948, the film is as riveting as SICARIO or any other thriller you will see today, and amazingly still as timely and as timeless.

Pre-ordering is something unique to that weird world of comic books.

Not every comic store can carry every comic. There are a lot of publishers, coming out every month with new titles. Staying on top of it can be an initial learning curve.

But pre-ordering helps you save money, depending what online or brick and mortar retailer you use, the amount is typically between 10% and 50% savings.

The particular online retailer I use, and that I recommend, saves you 35% off the cover price of your comics.

Why do I use the retailer that saves you 35% as opposed to the retailer who saves you 40 to 50%? Well I’ve used that 50% off retailer in the past, and had issues with their customer service, as well as problems getting the issues I ordered, and problems with how i was being charged.

With the 35% off retailer, the customer service has been excellent, and I get the books I ordered in quality condition.

Okay this is part one of my comic book pre-order tutorial, the little trailer/preamble if you will.  I am hard at work on part two, with suggestions of what to order and the link you can use to order from my retailer of choice.

Give this post a like, and come back in about 4 hours to see the 2nd and final part of this pre-order for books shipping in over 2 months, in October.

There really is no competition here between the two collections of short stories. Stephen King when on, can write like a force of nature.

But in JUST AFTER SUNSET, Stephen King is not on.

Story after story fizzles against each other to create a collection that underwhelms. There’s a sense in these King stories, as in some of King’s novels, the sense of padding. Of words poured on just to have words, and the gist of the story stalled, till the mandatory word count is reached.

It makes for something of a chore to get through. The best way to describe the effect of JUST AFTER SUNSET is tedium. It’s a tedious, tedious read. One belabored story followed by another.

Thankfully Brandon Massey’s DARK DREAMS Anthology, while having its shares of misses (Kalamu ya Salaam’s story being one of the most egregious), on the whole is as fresh as JUST AFTER SUNSET is routine. DARK DREAMS’ pages are filled with enough strange, evocative and varied stories of the sinister and the savage; to make it a far more satisfying read throughout.

And I strongly recommend the almost sold out DARK DREAMS unabridged audio book read by a variety of great performers. A nice compliment to the paperback. Check it out here: Dark Dreams : A Collection of Horror and Suspense Unabridged Audio Book CD