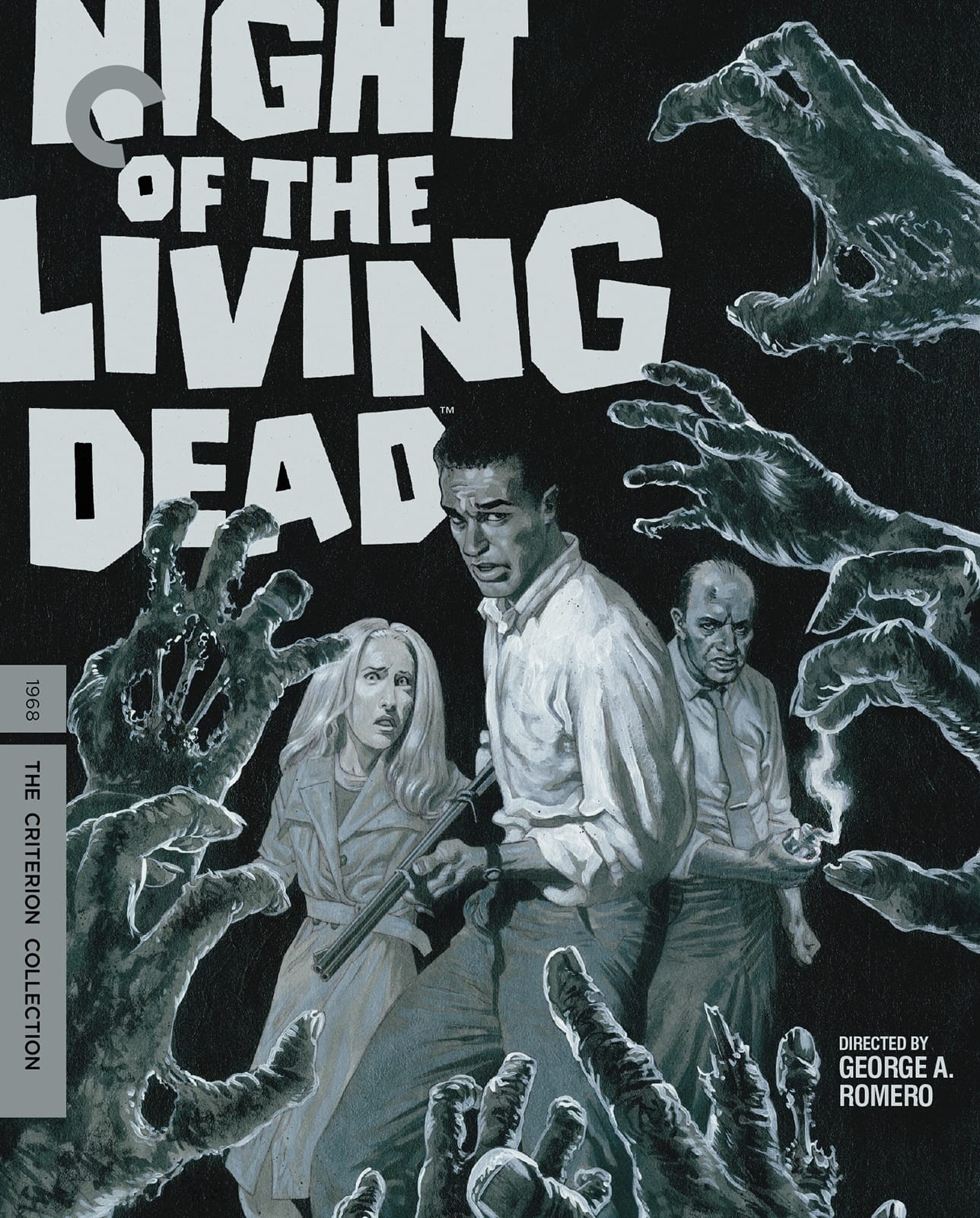 I’ve seen the movie before, years ago, as well as other Romero films. And while understanding the significance of NIGHT OF THE LIVING DEAD, I have never been a fan of the zombie/ghoul genre. Most likely due to its over-saturation by lesser filmmakers just regurgitating Romero’s novel approach, as well as simply not being a fan of gore.

Romero’s re-imagining of the Zombie as a flesh eating corruption never stood well with me. It was the myth of the ghoul, rather than the older Haitian mythology of the Zombie. A Zombie, as understood from Haitian lore, was something dead, that had been transformed into something beyond death and beyond corruption, more in common with the Jewish Golem, and seen most visually in the Val Lewton produced I WALK WITH A ZOMBIE

Romero’s flesh eating, rotting monstrosity, that was all corruption, could not be more different than the idea of the Zombi. However, to Romero’s credit he did identify the creatures accurately in NIGHT OF THE LIVING DEAD as ghouls, but for whatever reason ; the press or marketing latched onto calling them by the incorrect nomenclature of Zombie. If I had to guess, I would think the more exotic sounding Zombie, simply appealed to them more, than the more crude (but accurate) term of ghoul.

So while I appreciated NIGHT OF THE LIVING DEAD, I was never the biggest fan of it. It’s a little too strident for me, and argumentative, filled with unlikable people, which may or may not be accurate in such a situation; but was for me, not what I wanted to spend time viewing, and was a bit plodding because of it.

However, re-watching the film, on this Criterion release I have a new appreciation for the film.

First thing that strikes you is how stunning this film looks, in this Museum of Modern Art remastered edition. The Black and White cinematography is beautiful, and I see now exactly how stylish the film was in its use of camera angles and shadows. It may be Romero’s most beautiful film because of its noirish and dutch angle filled aesthetic.

2nd, the very structure of the film, while commonplace today, at the time the ‘house under siege’ motif was new, most notably seen in 1964’s Vincent Price vehicle THE LAST MAN ON EARTH. NIGHT OF THE LIVING DEAD managed to build on that premise, and deepen it, by adding group dynamics to the mix, as well a claustrophobic ‘you are there’ intensity, in its cinema verite shooting style. Not to mention the creation of a whole new breed of monster.

NIGHT OF THE LIVING DEAD, taken in context of when it was made, is ground breaking in terms of how it is filmed; the mixture of science fiction, horror, group dynamics and intended irony and unexpected social commentary, along with the running commentary of the media helping to tell the film’s back-story. And just the general bleakness of the film is astonishing, even watching it today. Given how truly threadbare and Indy this film was, in a time before the concept of Independent film even existed, its nihilism still has the power to impress.

Duane Jones gives a compelling performance as Ben, and is the bedrock upon which the film cements itself as a classic. But all the performances are surprisingly intriguing, from Russell Streiner and Judith O’Dea and William Hinzman (lead Ghoul) who effectively open the film in a now iconic sequence, to on-screen couples Keith Wayne and Judith Ridley and Karl Hardman and Marilyn Eastman, and Kyra Shon as their daughter.

A word on Marilyn Eastman who plays Mrs. Cooper, she gives, in a small role, one of the best performances of the film, up their with Dwayne’s work. You can not take your eyes off of her when she is on screen, she is so nuanced and compelling in a very contained performance, that plays all the more effectively in counterpoint to the histrionics and testosterone around her. She also was part of the crew and is on this commentary, and her insights are always an informative part of the commentary.

So the movie would go all through production with the title NIGHT OF ANUBIS, however once the film wrapped the distributors did not like the title ANUBIS, found it too esoteric no doubt, so the name was changed for the last time for its release, and the film NIGHT OF THE LIVING DEAD was born.

Romero and select Crew- It’s not the most interesting commentary, one reason is because there are so many voices on the commentary, and they are all going in different directions, and largely they are discussing minutiae even by commentary standards. Whether eye-glasses were supposed to be half on or all on, and discussions like that.

It is initially a very pedantic, pedestrian, minutiae focused commentary. However the commentary does pick up in moments, and becomes quite incisive, such as about 25 minutes in as they discuss the actors, among them the lead Duane Jones. and the thoughtful changes he made to his character. One intriguing thing is, it was colorblind casting. The role was not written for a Black guy, they actually had another actor, a White Actor, they were going to go with, but then Dwayne Jones came in an auditioned. His audition impressed everyone and he got the part.

It was a threadbare Pittsburgh production, and for the character of Ben they just needed a big guy to play him, as initially he was supposed to be a Brutish trucker. So largely they lucked out with Duane, as they got an actor who brought so much more to that character, than was on the page.

Necessitating rewriting that character for the more erudite and thoughtful presence that Duane brought to that role.

That in hindsight the film is notable for a Black protagonist, I think overlooks the stronger blessing of that casting; which is that they were lucky enough to get a great actor for that role. Duane Jones ended up bringing a unique variable to that performance, that would have been lost –  not just by an actor of a different ethnicity, but an actor of lesser sophistication. By any actor that was not Duane Jones.

There is a humanity Duane brings to a brutish character, that careens it away from the facile, surface level histrionics— to instead explore someone captivating and heroic and flawed. The takeaway from NIGHT OF THE LIVING DEAD is not that they cast a Black actor in the role, but rather that the best actor for that role, was a great actor, who was also Black. It is a subtle distinction but I believe an important one, that is still not quite embraced today.

Another interesting segment on the commentary, is an hour into the film, where they discuss the making of one of their more involved shots, the Washington DC based tv coverage, where the crew drove down to DC, and play the roles of reporters and military personnel. Involved, because for all intents and purposes this was just a very small Pittsburgh production, done by the crew, in any free time they could carve out, around their full time jobs.

The commentary than segues into discussion of Duane Jones before his passing. From this point to the end, the commentary gets far more intriguing. Overall, while not always fluid, this commentary gives you historic insights into the film and the performers that otherwise would have been lost to time. For this reason while not a great commentary, there are gems in here that make it an essential commentary.

Commentary Two has even more people involved, so lots of similar voices overlapping. Russell Streiner (producer/actor ‘He’s coming to get you, Barbara!‘), helping to sheep-herd this conversation, gets it off to a more compelling, entertaining start than the first commentary. And it places this commentary in time, to hear them discuss the upcoming laserdisc release. As someone who remembers laserdisc and still own some, it is a nice nostalgic touch.

And I like that, in this commentary, they reassert that NIGHT OF THE LIVING DEAD was not made as a social message film, they were simply making a horror film, and Duane was hired simply because he was the best actor who auditioned for the role. Add to that a running gag about Marilyn Eastman and lumber, and it is just a fun, affable commentary.

Holy cow. Is this a loaded, feature rich release. This disc includes over 12 special features. Including interviews with the cast, and new documentaries made just for this release. It is just  wonderful grab bag of content that you can revisit and dive into at your leisure.  Including just a wonderful 1987 audio interview with Duane Jones recorded with Tim Ferrante.

“That moment, the total surrealism of the racial nightmare of America, being worse than whatever we were doing as a metaphor in that film, lives with me to this moment.”

All in all, is a must own physical media release. In terms of beauty of the product on your shelf, and the content itself, and booklet. I came to this release a bit hesitantly, because as I mentioned I was never a huge fan of NIGHT OF THE LIVING DEAD. Revisiting this film, and listening to the commentaries, and going through the special features, I have to say this is one of the treasures of my collection. Highly Recommended.