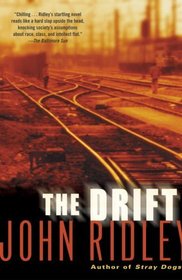 AUDIO BOOK REVIEWS: THE DRIFT by John Ridley- An unfortunate Ridley thriller that has moments of interest, interspersed with protagonists doing plodding, incredibly stupid things to the point of just being an unsatisfying and frustrating listen.

Kudos to the excellence of JD Jackson as the reader that just barely makes worth finishing, a book I would, in book form, have given up on long ago. The ugliness of the language, and the ugliness of the story you wade through… hoping there’s something to all this. But it just leads to more ugliness.

The story just goes on too long, has a tendency toward repetition, and a certain degree of sickening spinning of wheels, that all ends in the moronic and belief defying and unsatisfying. And a twist I’m pretty sure most will see coming. That’s part of the plodding nature of the story, it takes you through a lot of words, to an ending you see coming, and have to endure till the story catches up.

And worst of all it’s just not an entertaining bone in this story’s length. It increasingly feels endless and pathetic. Ridley’s early novels are so strong, that it makes this later work all the more frustrating and disappointing. Grade: D-/F. 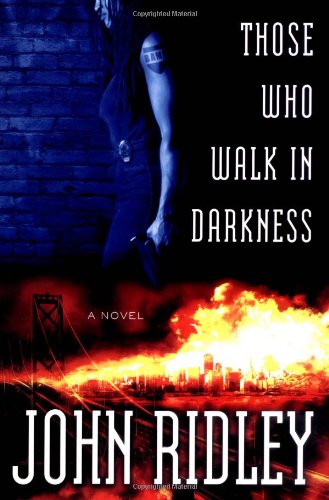 AUDIO BOOK REVIEW: THOSE WHO WALK IN DARKNESS by John Ridley, Read by Patricia R. Floyd

This is the first book in John Ridley’s SOLEDAD series. Set in an alternate world where superheroes aren’t just real, but have fallen from grace like pop stars or athletes, and are now considered terrorists and are hunted and killed if found in America.

Our protagonist, Soledad, is a member of the special LA unit that hunts and kills super powered beings. It’s capably read by Patricia R. Floyd, who gives the characters distinct voices. The issue isn’t the reading.

The problem is trying to do a super-hero pastiche/deconstruction is a bit of an uphill battle in any format, just because it has been done so well, by so many in comic-book/graphic novel form. From WATCHMEN to KINGDOM COME to MARVELS it’s this huge history of mankind dealing with beings they do not trust. And it has been done, exceptionally well, in the medium that is tailor-made for these types of stories… comics.

Now John Ridley brings this tale of a mutant hating cop into novel form, and it’s not badly told, even exciting in places, it’s just from scene one it feels dreadfully familiar and by the numbers. Bigoted cop and this tale of redemption, either because she sees the good some ‘mutants’ can do, or perhaps learns she’s part mutant. And if there’s no redemption, that’s even worse. That’s spending time with an unlikeable character that stays unlikeable, ie a David Ayer movie (Not a fan, hated his TRAINING DAY, didn’t like his HARSH TIMES any better).

I don’t know, point is by the third cassette, I just don’t care. I’m just not interested. It just feels like a chore to slog through. Cop shoots Angel, and tries to justify it. Yada, Yada, Yada. It’s just hundreds of words in and I don’t feel any fresh ideas.

Possibly someone who brings no superhero experience to the novel will get more out of it, though I find it hard to believe if you have no interest in previous superhero items you’ll for some reason find this of interest. And those who do bring a history with the concept, will just find it, like myself, marking time till it gets out of first gear.

I couldn’t tell you, because I just could not be bothered to go any further. Only the excellent reading by Patricia Floyd kept me going this far, reading the paperback I would have become severely disinterested quite a bit before.

My recommendation… stick to John Ridley’s earlier pure mystery/pulp fiction novels. He’s a good writer I just don’t think he brought enough engaging or captivating to this story. FINAL GRADE: Rent something else.

John Ridley is one of the most versatile of writers, starting out doing writing for such shows as MARTIN and FRESH PRINCE OF BEL AIR he would follow that up with some of the most accomplished novels, screenplays, and films of the waning days of the 20th and new days of the 21st century.

For me his loose HARD LUCK pulp trilogy of STRAY DOGS, LOVE IS A RACKET and EVERYBODY SMOKES IN HELL are the books that made me a John Ridley fan. They are a series of exhilarating mystery novels, that share only a thematic sensibility but a successful one, of a hard luck or down on their luck protagonist, trying to navigate a world completely out of his control. 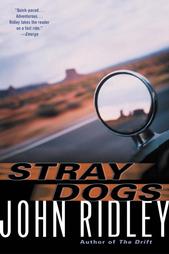 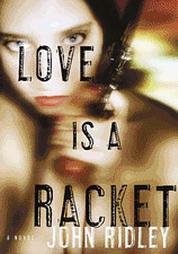 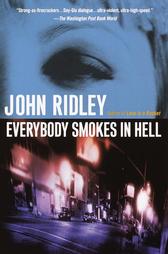 Love Is a Racket

Everybody Smokes in Hell

These would spawn two equally excellent films, Namely U-TURN based on STRAY DOGS and directed by Oliver Stone and starring Sean Penn and Jennifer Lopez, and COLD AROUND THE HEART written and directed by Ridley and starring David Caruso, Kelly Lynch and Stacey Dash, both excellent, intimate, dark noirs/neo-noirs in the vein of films such as BLOOD SIMPLE and THE POSTMAN ALWAYS RINGS TWICE. 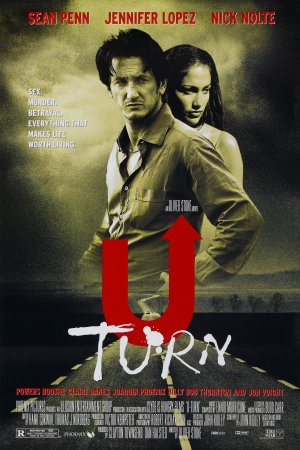 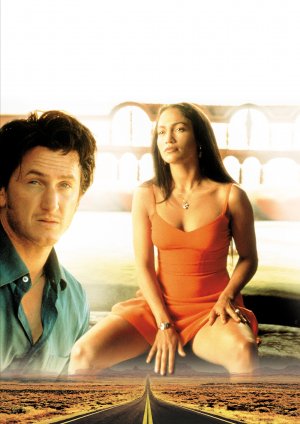 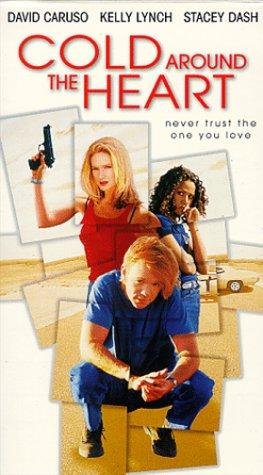 Unfortunately both films were released in 1997, the year of Blockbusters such as TITANIC, GOOD WILL HUNTING, FIFTH ELEMENT, MEN IN BLACK, as well as the year of the crime film/neo noir JACKIE BROWN, LA CONFIDENTIAL, LOST HIGHWAY, THE GAME. It was just a case of bad timing, and these great movies getting squeezed out at the box office.

Unfortunately I think what the financial under-performance of the films, specifically COLD AROUND THE HEART robbed us of most, was more work from John Ridley as director. I think in any less big-budget heavy year, his COLD AROUND THE HEART would have done for him what ONE FALSE MOVE did for the career of Carl Franklin, or the aforementioned BLOOD SIMPLE did for the Coen Brothers.

As it is both films are available on DVD (unfortunately Director’s Commentary versions aren’t yet out there) and can be appreciated for the stylish and compelling films they are.

And they led into the next phase of John Ridley’s career.

U Turn: Price your copy here

Cold Around the Heart: Price your copy here

Both interviews are only about 15minutes, but great listens.

Listen to them here. 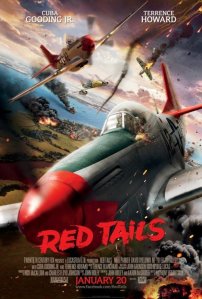 I just returned from seeing RED TAILS, a movie I had great qualms about, after just seeing the trailer, and specifically regarding the leads of Terrence Howard and Cuba Gooding Jr.

I didn’t think they could bring the gravitas necessary to these pivotal roles.

I was absolutely wrong.

There is no other way to say it. Both Cuba Gooding Jr and Terrence Howard nailed their respective roles, giving great performances. As does the whole cast.

I’ll go into details later, but suffice to say it’s the first great movie of 2012. From direction, to acting, to editing, to special effects, to script, the movie fired on all cylinders.

Just a phenomenal movie, that I’m already planning to see in theaters again in the next couple of days.

And evidently I’m not alone. When I went to buy my tickets, the girl at the counter told me ‘You might want to get a seat now, because it has been selling out all weekend’.

And after seeing it, I can see why.

And the audience was completely into it from first frame to last. Just accomplished film-making and a great flick.

Easy grade of A. 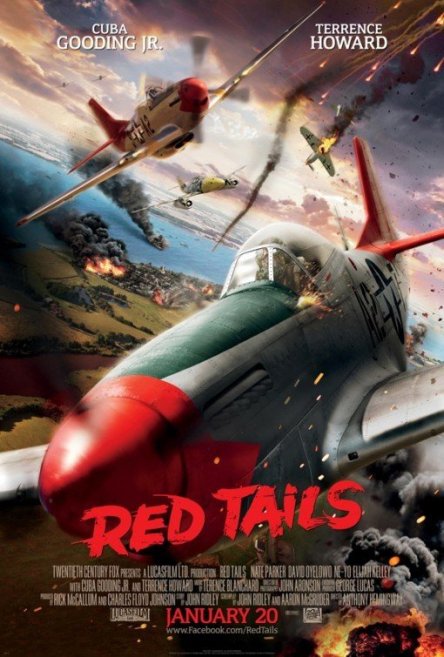 I’m pretty darn good at being able to call a film’s quality, just based on the trailer. There are exceptions but more often than not, I’m pretty dead on.

So onto the trailer reviews…

TOWER HEIST… the idea initially sounded okay, Eddie Murphy and Ben Stiller in a crime/comedy film directed by Brett Ratner. The trailer is awful. I mean… awful. It is a very bad sign when you can’t even make a 2 minute trailer funny or interesting.

Brett Ratner hasn’t directed a feature film since 2006’s X-MEN:LAST STAND, which unlike some, I liked. However, I didn’t like his previous stabs at funny… such as RUSH HOUR, and TOWER HEIST looks to follow in the same plodding, unfunny footsteps.

Ben Stiller’s last film was the absolutely atrocious LITTLE FOCKERS. A film that was so bad it was painful to watch. As funny as an abortion, and TOWER HEIST seems to be in that mold.

And last but not least, Eddie Murphy. I’m a huge Eddie Murphy fan, but seeing him trying to do the same routine he was doing 30 years ago, is just pathetically sad. And the fault, with a cursory listen, has to fall on the 4 ‘writers’ that put their name to this mess.

All in all, TOWER HEIST is the worst trailer I’ve seen in a long, long time.

2nd trailer is for RED TAILS. Going into it I have a few problems:

2- I think the title (which I understand is a nickname for the flyers) does not work as a film title, and is boring and unimaginative and a detriment to the film at best, much better would be a title like BY THE DAWN’S EARLY NIGHT (heh, heh, just thought that up, I quite like it). It’s just another example of marketing sabotaging films that deal with heroic characters of color. Ala the title of HANCOCK.

Those negatives noted, it has some strong positives.

Most notably that it is written by John Ridley, who is one of the most talented pulp writers since Chester Himes and Jim Thompson. I’m not always crazy about his politics, but he’s a fantastic writer, and every film that he has been the screen writer for (UTURN [based on his fantastic novel], THREE KINGS, and COLD AROUND THE HEART) I consider absolutely brilliant. This will be his first screenplay in almost a decade.

Also, It’s directed by first time feature-film director Anthony Hemingway. This is potentially a negative, but he has some solid TV directing experience, and the trailer looks good. Exciting really.

I’m not really sold on any of the casting, and as stated I think Terrance Howard and Cuba Gooding as the ‘stars’ are going to be the main hurdles for me, I would much rather see actors such as Idris Elba (LUTHER, ULTRAVIOLET, THE WIRE, TAKERS, OBSESSED, THOR)or Michael Jai White (of BLOOD AND BONE and BLACK DYNAMITE) or Eamonn Walker (of KINGS, BLOOD AND BONE) or Taye Diggs (DAY BREAK) helming this film. But it does have a couple interesting actors, namely Andre Royo as well as Bryan Cranston and Lee Tergesen.

So I’d like a name change on this film before its January 2012 release, but that (and my misgivings) aside, I’ll give it my support when it hits theaters.

So a thumbs down for TOWER HEIST and tentative thumbs up for RED TAILS.

Purchase any of the following recommended items using the links below and help support this blog. Thanks:

Cold Around the Heart