CEREAL AT MIDNIGHT –  Is the only Youtube channel devoted to physical media, DVDs, CDs, Blu-Rays, etc that I am subscribed to. Just a great channel, with a personable host, showing his love for physical media.Love his channel, highly recommend it for all fans of physical media. They have a nice recent episode, perfect for Halloween, and the films of the great Vincent Price.

Here is the thing, streaming is fine, and VOD is fine, and Hulu is fine, and Spotify is fine, but at the end of the day, it is all vaguely out of your control. And we live in a Millennial age where the mob thinks nothing of bigger issues such as Anti-Trust and eradication of public domain and setting up a Monopolistic regime, with no viable competition, just as long as they get to see Avengers in the same movie as Fantasic Four. If you don’t understand that, do a search for Disney, and add all those words i just mentioned… and maybe when the searches return… a lightbulb will go off.

We live in an age where the masses think nothing about the loss of privacy and human rights, as long as they get to easily scream at people in their MMOGonline game.

Between you and your entertainment is various levels of gatekeepers, from your ISP to your cloud storage, to your streaming platform. And we live in a bullshit age of witch-hunts and ‘me too’ bs bandwagon jumping, where people can get fired and vilified before they have a day in court, and programs and movies  can be censored or altered based on the screaming of the uninformed mob, or soundtrack altered due to rights issues.

So suddenly that movie you love, may or may not be available depending on licensing agreements, and it may or may not be the same edit of the version you grew up with. It could be censored to comply with the sensibilities of fools, or the fear of companies , that faceless twitter trolls will say bad things about them.

God bless the child that has his own.

Here’s the thing, gatekeepers, businesses are always behind the curve, and seldom do anything for the good of the people, or posterity. They do it because of expedience and the bottom line, and that is contrary and in direct opposition… to culture. The health of it, and the growth of it.

We here in the 21st century have access to movies from the Silent age of cinema, and radio shows from the dawn of sound, and TV shows from the infancy of the medium, not because of businesses, but in spite of them.

But still, for all the teaching, Businesses and the Gatekeepers, while they have definitely learned to monetize, and secure the rights to everything they create, they still have not learned to respect the creations.

So end of the day, I love having all these shows and movies and music, available via gatekeepers, via VOD, and Hulu, and Spotify, and Itunes, etc.

But end of the day, have your hard media to fall back on, against the day that ISPY or AIRPLANE or HOUSE OF CARDS or insert show here, is not politically correct to view or hear or watch.

End of the day, do not trust the things you love… to gatekeepers. Own the shows you love in a form that no gatekeeper can edit at their whim, or remove, or bar you from.

So that is one reason I’m a fan of CEREAL AT MIDNIGHT. It is a reminder that physical media is still out there, and can be picked up affordably. And is worth picking up. 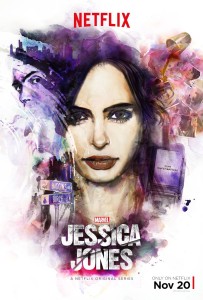 Netflix continues to just hit it out of the park these days. As smart and succesful as Marvel Studios has been crafting the most succesful movie Franchise in history, Netflix is making those kinds of historic strides in the area of streaming entertainment.

The quality of the projects they produce and they purchase is just phenomenally high. They know how to pick and make great projects, from HOUSE OF CARDS to LONGMEYER to DAREDEVIL they have not just made good shows for a streaming channel, they are making great and groundbreaking television… by anyone’s definition.

JESSICA JONES, the 2nd of their Marvel Universe properties, continues that midas touch streak. Three episodes in and I’m loving it. It’s a different beast from DAREDEVIL, perhaps not as compulsively brilliant, it’s more of a slow burn, but so far that’s working out just fine.

Brian Michael Bendis, the writer whose graphic novel ALIAS this series is based on, and the producer on this series, should be justifiabbly pleased. This series so far is doing justice to his acclaimed graphic novel, while being distinctly its own thing.

If you are not watching it yet, my recommendation is to start. It is very good. Oh, and for mature viewers only. 🙂