A lot of people are concentrating on the tech deals, but there are also deals on what Amazon initially built its empire on… books.

Here then are great book deals recommended for you to pick up this Prime Day… and beyond. (While supplies last!).

Everyone is aware of Kareem Abdul Jabbar as one of the great basketball players of all time. Fewer are aware of him as an acclaimed writer. From non-fiction books on all Black tank units in World War II, to his recent Graphic novel work, Kareem Abdul Jabbar proves himself as compelling a writer as he is a personality. I recommend this Prime Day, picking up his books and audio books.

The last link above is for the audio cd. There is only ONE left. So hopefully I beat you guys to it. 🙂

The hardcover is almost sold out.

And below is his new Mycroft book, the third in the series, coming out this September.

And I would definitely also recommend the graphic novel, available here: 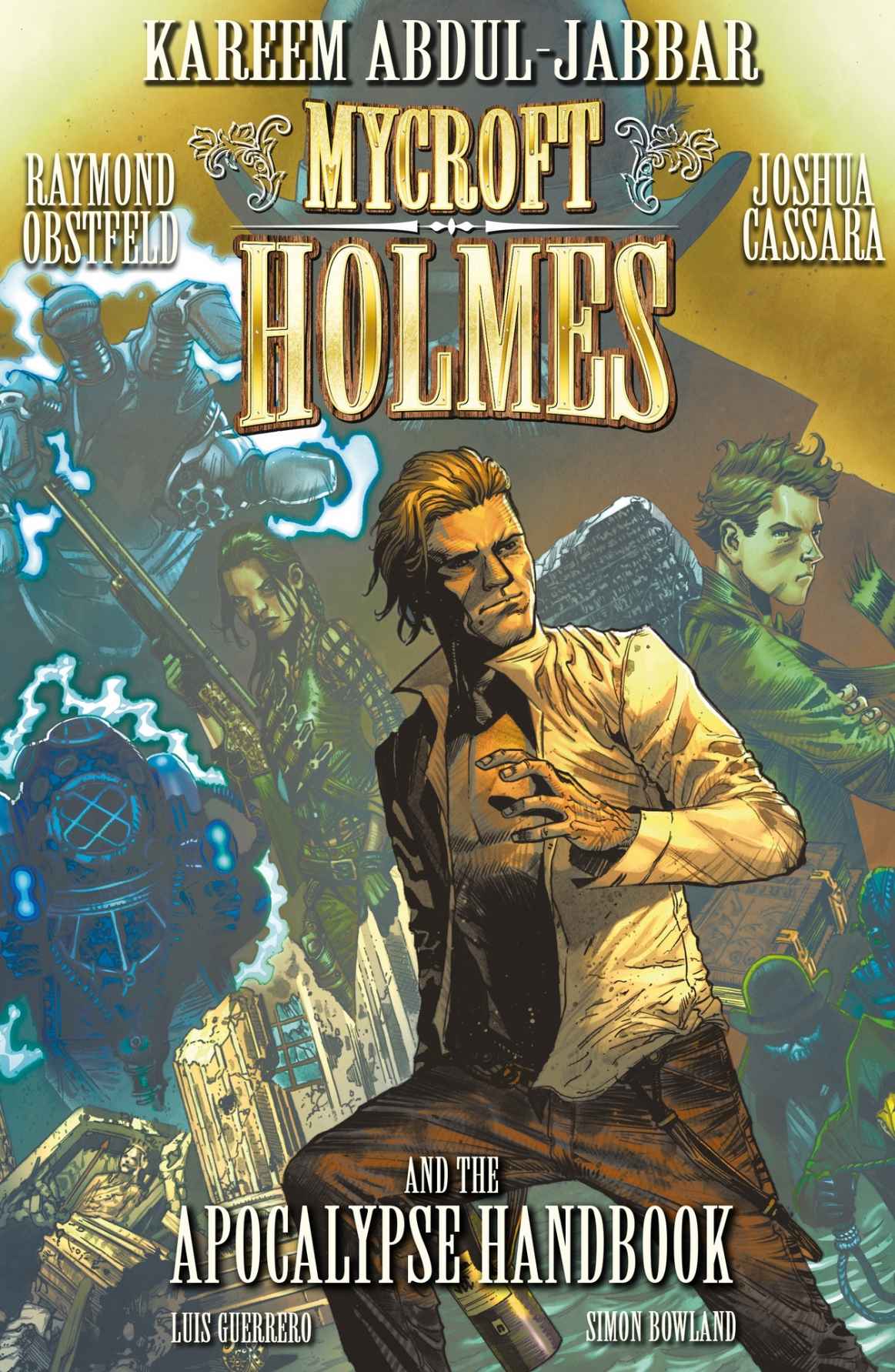 Use the links, get a great item for yourself, and earn a couple pennies for this humble blog. A win-win! 🙂

for the week and the New York Times Bestseller list

While I found the NY list more interesting than the Amazon list, both were a bit more miss than hit for me. The majority of their items wouldn’t be on my purchase list. What would be?

– Book Description
Publication Date: April 12, 2012
The Dog Star, Sirius, is tried – and found guilty – by his heavenly peers for a murder he did not commit. His sentence: to live on the planet Earth until he can carry out a seemingly impossible mission – the recovery of a deadly weapon known as the Zoi. The first lesson Sirius learns in his lowly earthly form is that humans have all the power. The second is that even though his young mistress loves him, she can’t protect either of them. The third – and worst – is that someone out there will do anything to keep Sirius from finding the Zoi. Even if it means destroying Earth itself. This funny, heartbreaking, stunning book features an introduction by Neil Gaiman, an avid fan of Diana Wynne Jones.

Publication Date: April 12, 2012
Polly Whittacker has two sets of memories. In the first, things are boringly normal; in the second, her life is entangled with the mysterious, complicated cellist Thomas Lynn. One day, the second set of memories overpowers the first, and Polly knows something is very wrong. Someone has been trying to make her forget Tom – whose life, she realizes, is at supernatural risk. Fire and Hemlock is a fantasy filled with sorcery and intrigue, magic and mystery – and a most unusual and satisfying love story.

Widely considered to be one of Diana Wynne Jones’s best novels, the Firebird edition of Fire and Hemlock features an introduction by the acclaimed Garth Nix – and an essay about the writing of the book by Jones herself.

About the Author
Diana Wynne Jones was the multiple award-winning author of many fantasy novels for children, teenagers, and adults. Her book Howl’s Moving Castle was made into an Academy Award-nominated major animated feature by Hayao Miyazaki. She received the World Fantasy Lifetime Achievement Award in 2007. Married to the medievalist J. A. Burrow, with whom she had three sons, she lived for many years in Bristol, the setting for many of her books. Diana Wynne Jones passed away in March 2011, after a long illness.

– Publication Date: October 7, 2011 | Series: Doc Atlas Onmibus
Set in the era of the 1940s and 50s, this collection of pulp-style novellas follows the adventures of the mighty Doc Atlas and crew from the jungles of Central America to the frozen tundra of the North Pole. Whether they’re prowling the streets of Manhattan, investigating reports of a killer gorilla (with the purported brain of an executed criminal) or a crashed flying saucer in a small town named Roswell, New Mexico, Doc and company always see the investigation through to the end. Written with historical hindsight, these tales combine the best elements of the pulp era with actual historical figures and events.
– I’m not a Doc Savage fan. So a Doc Savage homage, is generally not something that is going to get my attention. I would never even have stopped on the page, accept the cover. It had a striking Geoff Darrow cover. So that got me to stop, read the description and decide… yeah it sounds worth a look. And that would neveer have happened without a great cover. I can’t stress this enough, with ebooks and print on demand and specialty presses there is a lot of product and competition out there, make it easy and attractive for your book to stand out and get picked up… pay the money, get a great cover. I see so many books, and I’n a cover guy, so if you send me a book, and the cover looks like a two year old drew it, I don’t care how good the book is purported to be…, I’m just not going to take the time to read it. An awful cover, to me, shows a lack of concern on the writer’s part, for their product, not to package it as pleasingly as possible. And if the writer doesn’t care… why should I? So people, if you spend months or years on a book, don’t short-change yourself… spend the money and have a nice cover drawn up. And that’s exactly what writer Black and Lovato do with this book, and as you can see by me highlighting their title… having a good cover helps. It won’t make up for bad writing, but it will at least get people to open the book and judge for themselves the quality of the writing.

– Publication Date: January 20, 2012
Three previously unknown accounts in the case files of Sherlock Holmes, discovered and transcribed by Hugh Ashton: The Odessa Business, the Case of the Missing Matchbox and The Case of the Cormorant.- I like these theme books, and Hugh Ashton’s stories are getting good reviews.

For other writers who do a fantastic job of writing original Holmes stories, some superior to the originals, I have to direct you to the fantastic audio dramas by the folks at IMAGINATION THEATRE. Jim French with wife Pat French since 1952 have been working in radio drama, and since 1995 with Transmedia have been producing and broadcasting IMAGINATION THEATRE.

Starring John Patrick Lowrie and John Gilbert as Holmes with Lawrence Albert as Dr. Watson, their long running Sherlock Holmes radio series is not just good Holmes, it’s one of the best adaptation of Holmes… period. Better than the BBC productions, better than the Downey movies, better than the new Sherlock tv series (SACRILEGE!!!).

In fact there are only two other adaptations I rate as highly, the Jeremy Brett television series… which is seminal entertainment, and (not the Rathbone radio series) the John Shirley 1940s radio series when written by two particular writers whose names are escaping me at the moment. But that’s it, those two and French’s adaptations, a Californian, An American production, are the tops.

French’s IMAGINATION THEATRE, for hundreds of weeks, producing quietly without the attention it deserves the best Holmes Original stories and Adaptations, of our time.

I wish however they would put together thematic sets of their Holmes audio dramas. They have a fantastic 3 or 4 episodes with a villain, that transcends Moriarty in terms of craziness, but it is spread over multiple seasons. They need to make that trilogy/quadrilogy a boxed collection onto itself, and that would make a fantastic introduction to IMAGINATION THEATRE and their Holmes dramas.

But do they listen to me… no. Oh well, until such time as they do, make do with the following:

This posting is brought to you by:

THE CASEBOOK OF SHERLOCK HOLMES
A GRANADA TELEVISION PRODUCTION
THE DISAPPEARANCE OF LADY FRANCES CARFAX
DRAMATIZED BY T.R. BOWEN

The best line from this Sherlock Holmes’ story, isn’t actually in the story and wasn’t written by Conan Doyle in 1911 when it originally appeared in the Strand Magazine (And later to be collected in HIS LAST BOW). The best line is in the 1984 Granada Television adaptation of the story, starring the brilliant Jeremy Brett and written by the definitive Holmes’ dramatist… the great T.R. Bowen and goes thusly:

Peters: I don’t believe you’d use that (referring to the gun Watson has pointed at him) on an unarmed man, Doctor.

Watson: I was a soldier in India, Sir. I’ve shot nobler creatures than you.

God that is such a great line.

I love the Brett television series, and I say this not being a Conan Doyle fan.

I don’t dislike Conan Doyle’s work, but I’m not particularly wowed by his writing either. I’ve read many of his stories and own the brilliant THE NEW ANNOTATED SHERLOCK HOLMES by Leslie S. Klinger, and I don’t think his stories are particularly timeless or exceptional, I think in many cases they are very formulaic and repetitive and a bit too mired in the jingoism and other isms of their time.

However what is brilliant and novel, is the germ of Doyle’s idea, the central conceit of these very remarkable characters, this odd duo poised against crime. The character of Holmes and Watson (particularly as developed in the television series where they expand his role, and give him real weight) and Victorian London are large enough to continue to capture and inspire our imaginations. Are large enough to be built on. Iconic enough.

Iconic enough that great writers like T.R. Bowen can flesh out these stories, and make the whole, the equal of its parts, and often superior to its parts.

Check out my previous review of a TR Bowen Holmes Adaptation, by searching my blog for mentions of Sherlock.