‘When you strip everything away from Batman, you are left with someone who doesn’t want to see anyone die.’ — KINGDOM COME by Alex Ross and Mark Waid

When I think of humanity in general, and the holiday season in particular it strikes me that that should be our goal. The pursuit of a world, where nobody dies in vain.

But the reality, particularly in America, this time of year is that with the eyes of the media diverted; government sponsored mass-murders actually ramp up, bombings ramp up (now of the drone and unmanned variety, machines murdering men.. what an unholy road we walk), the terrorism of the rich… ramps up.

I’ll not forget the media celebrating the death of Bin Laden. Death and Murder and Torture are never things to celebrate, no matter the justification.

Be the murdered Bin Laden, or Hitler or insert bogieman here, bringing murder to murderers is never anything less than a soiling, and a failure, necessary though it may be, it is a failure of reason. And as such is a solemn time, not a glorious one.

Because to do otherwise, to take joy from death, and celebration from degradation and horror… is to devoid you of moral high-ground, is to make you (in ways stark and true) worse than those you would revile, worse than your Hitlers and Bin-Ladens. It makes you a lynchmob, a coward, and an opportunist of carnage.

We must strive to be better than that, otherwise your protestations of Christianity, and Holy Nights, and piety are just lies, are hypocrisy and mendacity most foul, that you use to conceal your roman desire to see people bleed and suffer and die.

You become that lowest form of life, a gibbering coward among cowards, you become nothing more than a grasping claw, a rolling eye, and a screeching mouth… in the creature we call lynchmob. And there is no lower, and ultimately, more inhuman form of life.

Our goal therefore must be to reject that, to reject the easy lies and the easy hates, and work toward this wildly improbable world where no one dies in vain.

But humanity’s very existence is an improbability, so we can bend that already fanciful existence to either improbable heights of good, or improbable depths of evil. We just have to pick a direction.

Here, on this holiday season, more fiction than fact, ‘goodwill to all’; look into yourself and find what is hypocrisy, what is lies, and find it in yourself to make truths, and truly believe and act on this idea…. of a time of peace. 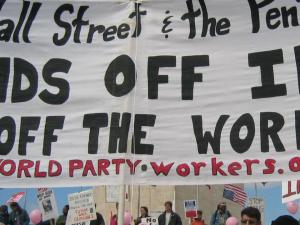 The problem I have with President Obama, is not that he lied in his pre-election promises.

To some extent all politicians, slaved to corporate interests lie, it is an unfortunate failing of the American political system that we allow business to have more influence on our politicians than the citenzenry they are supposedly there to serve.

No my issue with Obama, that I hinted at on this blog prior to his election, is the magnitude of his lies.

He rode into office on the hopes and dreams and eloquent quotations, sufferings and civil liberties of the dream of America. Rode into office as an answer to this endless push to war, to the dismantling of liberties, and to the corporate plundering and rape of America, that characterized the Bush administration.

He pays lip service to liberalism, when his policies, laws and edicts since entering office, is conservative to the point of totalitarianism. Granting the FBI and other acronyms of our abuse, unheard of powers to dismantle, without oversight or rule of law or due cause, civil liberties on a frightening scale.

They can shut down websites, the Internet in fact, a kill-switch, with no cause, and no oversight beyond their own. The FBI is allowed to put a tracer, a tracking bug if you will, on any person, any vehicle, at their discretion, with no oversite of law. With no word, but their own. A recent push to make abuse or violation of corporate rules by employees, a federal crime. And the list goes on.

Add to that the continuing rape of the American people, unholy taxation of the American people, financial slavery of generations not yet born, to support businesses unrepentant in their mismanagement and greed, and willingness to sacrifice America as a concept, to advance insane policies of the military-industrial complex, and new middle east pleasure nations, carved out of the bodies of all those we have blown to hell.

So yeah, you can say I’m not happy with the current administration. Obama was the lesser of two evils, but much like Kerry before him, whose race against Bush was a sham, too good old boys staging a fixed fight for the rubes, the wrestling crowd, he was just Bush, repackaged.

Which is to say, he is the talking head of global corporate entities, that love America not.

But what makes Obama’s betrayal, particularly egregious, is it really is a no win situation for him, the way he is currently playing it. He will go down as a traitor to the masses who elected him, and to the interests of people and causes and legacies, that he had the gall in his election bid to invoke, and the gall in his presidency to utterly betray.

And even though he serves well his Bushian corporate masters, following in policy the dismantling of liberties initiated by Bush, he is reviled and hated by the very conservatives that his presidency is clearly supporting. Hated because, he still plays enough lip-service to liberalism, in his color if not in his heart, to elicit a Pavlovian hate, from people who are ignorant of the larger mysteries, and for whom hate is all they have been bred to give.

Which is perhaps what it was designed to do all along.

There are those, chairmen of ships of industry, pullers of strings, proponents of slavery, and dismantlers of concepts such as minimum wage, and workers protection, who want very much to be their father’s sons. To be once again undisputed Robber-Barrons and Masters, and make the mass of men serfs and slaves. And all that stands in their way… is this dream called America.

If they can make Americans renounce this dream of liberty and brotherhood, this purposely failed concept of America, they can win, those great things, their fathers lost.

They can win, by extinguishing in the hearts of those who should love it most… even the dream of liberty.

And Obama’s presidency stands poised to give to these men their…New World Order. Their rise of Nazism. We are Germany, being groomed for the coming atrocities, for the rise of a new Hitler, to save us from our failed democracy.

Obama as puppet to corporate masters will serve nothing but his own vilification, and the destruction of his children’s future, all children’s future, and the immolation of 400 years on this continent, long before the constitutional signing, of striving toward a more perfect union.

Obama’s only hope, as President, as Father, as Man, and ultimately as descendant of slaves, is to be in deed the man of his election speeches, to give those who voted for him, his half of the contract. And to give those who hate him for no reason, cause to respect him, and if necessary to fear him.

It is a hard road to walk. But when the choices are liberty or slavery, I will walk the former road, though hell and some such neighbor bar my way, to paraphrase Shakespeare. And Obama is at that point in his presidency where he must choose his road.

As defender of liberty… or its destroyer. 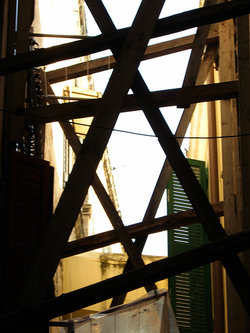 “Political Zionism is a far cry from the idealistic form that refined, cosmopolitan Jews like Herzl and his Western European (and North American) admirers thought that they had bought into. That is why the vast majority of them became disillusioned with the whole project long before Kristallnacht and then WWII. People like Einstein, Freud, Hannah Arendt, Judah Magnes and Martin Buber smelled a rat, and they made it clear that they had no interest in supporting the creation of a Jewish State in Palestine. This was, in fact, the prevailing sentiment among the vast majority of Western European and North American Jews. All of that began to change in the late 30’s and by the time of the liberation of the camps in 1945 this vociferous opposition faded away among Jewish liberals, progressives, socialists and humanists. European fascism of the Italian and German varieties ensured the success of political Zionism, the mirror image of Nazism, but with “the Jewish People” now cast as being simultaneously “the victims” and the “Master Race,” just like their role models, the Nazis, before them. History not only repeats itself – it plays practical jokes.”

The above is part of a a longer article authored by Roger Tucker, and is pretty intriguing. You can read the whole thing here.