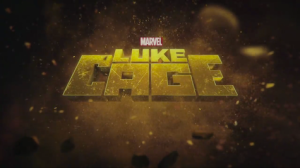 Well I’ve just finished watching the 13th episode of Netflix/Marvel Studios LUKE CAGE, and I have to say… I loved it. Full stop. Show runner Cheo Hodari Coker manages to in many ways do the impossible, and take a character already spotlighted in the JESSICA JONES series, and whose origins are the milieu of the Black Action or Black Agency film of the late 60s and 70s (mislabeled under the derogatory misnomer of Blaxploitation) and with him tell a rich, evocative, exciting, deeply layered cultural and historical and prescient love letter, to a place, Harlem, New York, and to an idea of local determination, and local agency, and self love, and colored love, and Black love in the age of Ferguson.

Or you can just look at it as a great action/drama series, set in the wonderfully expansive universe of Marvel shared superhero universe. :).

But what has exemplified the Netflix/Marvel collaborations to date is how grounded they are in a world not so dissimilar from our own. The gritty street level nature of DAREDEVIL’s 1st season, and ground breaking fight choreography, and fantastic writing made for a justifiably lauded 13 hours of television. (lost a bit in its less cohesive and interesting 2nd season) 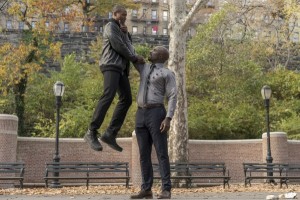 LUKE CAGE takes that to another level, in being a show that is as much about cultural signposts and idioms that define us, as it is the ‘A’ story of conflict and resolution. The literary and historical and musical references are not just littered throughout the story, they help define the scope of the character and the scope of the neighborhood that this story takes place in. A man is the things he loves, the things he reads, the things he listens to, the heroes that inspired, the places that mattered, and immediately in one episode Coker defines LUKE CAGE the character and the series in broad strokes, that for me reverberate deeply.

The first two episodes floored me in how good and rich and beautiful, they are. Coker here hitting, for me, the conversations I have in my soul and my head, Chester Himes, Walter Mosley, Denis LeHane, George Pelecanos, Donald Goines??? Come’ on Son!!! Kenyatta??? Those few strokes and I knew this was a writer with a deep love and understanding of genre fiction, and those who make it. 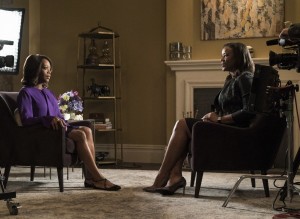 But it’s more than name dropping, our influences define us, and define our world, and define who we care for, so immediately they make us part and parcel of this story that Coker and his team of writers tell. It’s a beautifully structured 13 hours of television, in that the first 6 episodes are very much their own chapter. You could bundle those 6 episodes up and have a great season.

Episode 7 feels like a swerve, very much like a start over, so if you rush into it, not recognizing that peak at the end of 6, that culmination, it’s going to feel stretched out. One of the possible dangers of binge TV… you have to pace yourself. 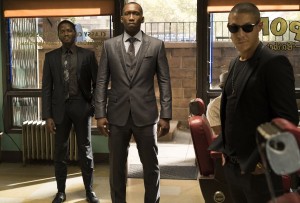 Take a break after episode 6, let that sink in. It is very much, in comic book terms, the end of the first trade paperback or story arc. Episode 7 begins the 2nd story arc, so you have to go into it not rushing to a conclusion, but gearing up for the start, because start it does. As everything from the first arc gets turned on its head, and new major players break on the scene. It’s a jarring ride, but once it hits episode 9 its has picked up steam and by 10 is on a full sprint to the finish. Episodes 11, 12 and 13 are Brilliant.

I want a Blu-Ray of this show, complete with Director’s and cast commentary, like yesterday. It is that good, and replete with episodes you want to go back to and know more about.

And I have to say it’s wonderful to see here in 2016, that TV is making great strides to not be exploitative, and to have shows where you can have more than a token number of characters of color. 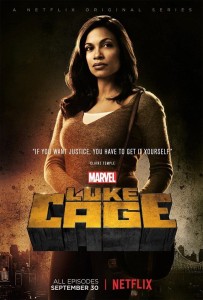 One thing I love about LUKE CAGE, particularly about the 2nd half (I love the first half as well) is it is so wonderful to see 6 beautiful women of color in major speaking parts, taking center stage in moments of strength and weakness, and owning the stage. It’s so rare to see a three shot of powerful, beautiful Black women in uplifting, exciting, dramatic, heroic material. It’s non-existent in Hollywood but thankfully, through great show-runners of color, and the success of shows such as BEING MARY JANE and EMPIRE is becoming finally available on the small screen. And the same love extends to being able to see multiple men of color in powerful, uplifting, heroic roles.

And the appearance of Method Man, and that song… Amazing. This series in addition to a DVD/Blu-Ray, must release a sound track, because in addition to the songs, the score for some of the episodes… is stunning.

Now, is the series perfect ? No. I thought episode 3, they had a real opportunity to do an action sequence as talked about as DAREDEVIL’s hallway fight, but the director/fight coordinator wasn’t up to it. You’ll know the scene when you see it, it’s perfectly fine, but never rises above fine, when it should have been spectacular. And it’s a different show from DAREDEVIL , so the action will be different, I get that, but you can still do different and STUNNING.

Luke Cage’s character (minor spoiler ahead) is revealed as a former police officer, former Recon soldier, former Prison MMA Fighting champ, former Boxer, all this to say… HE CAN FIGHT. So speed the dude up! Rather than standing there and waiting for someone to unload a clip on you, he should be disarming them and wrapping the gun around their necks before they can get off a shot. Especially since ricochets can kill just as well as any other bullet. I understand visually it’s an exciting thing to depict, but it should be the exception for talented filmmakers, not the rule. When he is shielding people from gunfire, sure… let the bullets fly. But in combat mode he should be disarming these guys before they get a shot off. Particularly later in the season that attitude would have made for exciting sequences. 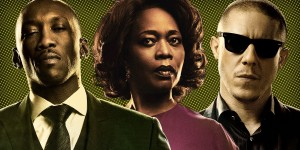 So that was another issue I had. However, the sequences do improve as the series progresses. Plus it’s not a show that is about fisticuffs like DAREDEVIL, as much as it is about the fight for a soul of a neighborhood. And that tale it tells expertly.

It is a superlative 13 hours of television, and all involved should take a bow. Cheo Hodari Coker has made not just a great Netflix series, but a great television show, and the one to beat as my favorite show of 2016. 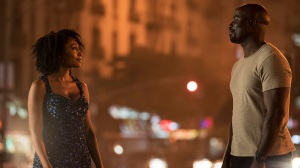 However I have minor quibbles with it, like I didn’t like the loss of Ben Urich, I found the character of Karen page annoying through most of it, the character of Matt Murdock was a bit unlikable, and the last episode it failed to stick the landing with an unimpressive looking costume, and just a bit of a dour ending. So those nitpicks, are the reason LUKE CAGE edges it out, and gets a big A+ grade from me. It possesses a story and characters that I want to revisit… often. 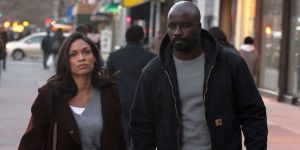 Final Verdict: Seminal, Must Watch TV! Will appeal to fans of mystery novels, especially fans of Chester Himes or Walter Mosley, or fans of movies such as TROUBLE MAN.

If you are not a fan or are made uncomfortable or nervous or have unexamined issues with women of color, you probably will have an issue with the later episodes.

‘The fault lies not in our stars, but in ourselves.’ Brother, it always does. :).

But for the rest of us who watch the series, LUKE CAGE is phenomenal television at its best.