“If we live all our life with lies, it becomes hard to see anything if it has nothing to do with those lies.”
– Amiri Baraka (writing as Leroi Jones at the time)

I met him today. Went to hear him speak. It is rare when the fact of a man, lives up to the myth. Mr. Baraka is such a rarity. 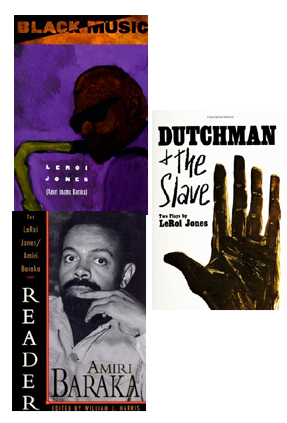 He was very much still, that young man who sought to, and to great degrees did… change worlds.

Still that Angry Young Man. And I use that phrase in its finest meaning. Not Anger that destroys, but Anger that motivates, that asks of the world to rise from burning beds. Conviction is perhaps the more accurate term, he had the conviction of that younger age of Panthers and Prophets. Of men who did, rather than discussed.

He had more energy in that 70+ year frame than in a whole city of young, confused , direction-less Black men, being herded, and in many cases running headlong, to the prisons and the graves.

The whole wheel of our society is designed around what DuBois called THE MIS-EDUCATION OF THE NEGRO, our schools, and entertainment and churches and urban centers and laws and fractured homes, geared to produce ignorant masses.

Control. Control has always been the fuel and the feast of the tyrannical.

A ruling class, maintains rule by concepts of supremacy and inferiority. A bigoted system doesn’t just prefer, but needs the stereotype of the thug, the menace to society, because that villain… is inferior and is easily dealt with, easily used, easily enslaved, and easily turned against his own and turned to the needs of the state.

But a Baraka, a Shabazz, this nation has fought internal wars of terrorism against the growth of such men.

Because such men, resist stereotypes. And not only do they give the lie to the concept of White Supremacy, not just by proving themselves the equals of their detractors, but they make a very compelling argument for being their betters.

The 1960s is when America, and the world was on the verge of a real… evolution. When we had in our sights the chance for growth, not of our technology, but our humanity, our conscience, our unity, our art, our peace.

And it all hinged on this idea of self determination, from China to Cuba to America to Senegal… the whole world was fighting to grow out of their fathers’ lives. And perhaps into their own.

From the Black Panthers to the Zapatistas, it was all the same fight. A fight against entrenched colonial evils, entrenched slavery. But more than that, it was a fight for evolution.

Instead of evolution however, powers and principalities won the day in the 60s, and crushed globally, but most notably in America that burgeoning social consciousness. And from that point to now, when the rule of law was put on hold, and assassination of the enemies of empire green lit, going on 50 years, we have not evolved. Our technology yes, but not our humanity, not our art, not our dreams, not our conscience.

We largely are stuck mired in the same entrenched hates, and economic folly, and capitalistic wars, of the 60s. In fact it’s worse, because our technology increasingly allows our hates and our ignorance a greater ability… to harm.

So in the 60s when we put down those Angry Young Men who spoke, before anyone else, of community based health care, and community schools, and self-love, and true community/tribal policing, and pan-national unity, when we stopped them because of their dreams and plans of Camelot… what did we stop them for?

Is the average American, whether white or black, any better than his father? I would say we are worse, sure we have toys, but we also have an America on the verge of economic, cultural and societal collapse. We are Germany, poised before the rise of Hitler.

We are poised again for Fascism. Again for Rome.

We have gone backwards since we turned our back on those young men, who pointed us to the future. We murdered them and caged them for life, and allowed the greed of the few, to condemn the many to failure.

Your racism is a class construct used to make you a tool, make your children tools, and preserve a decaying power structure of Disney and Time Warner and Sony and Shell, to preserve a decaying, fabricated system of lords and serfs, that should have been demolished and strewn to the four winds, five decades ago.

Your racism keeps you… a slave. A nigger. That’s the war we fight. Not of name calling, or ethnicity, but of reason and ignorance. It is a fight to see the whole chess board, not just the piece you sit on. And ultimately it is a fight to evolve, and that cannot happen in a world run by multinational corporations and robber barons, in a world of unchecked capitalism/fascism.

“If we live all our life with lies, it becomes hard to see anything if it has nothing to do with those lies”

That’s why I go out and listen, and hopefully learn from these women and men who still speak the truth.

I have some hopes, that the word, in an age of orbital nuclear weapons and designer diseases… I have hope… that all of it, all of it, all the lies, all the powers, all the principalities, can begin falling like dominoes. Knocked down by men and women… who will never cease speaking… a few true words.

[p.s. Many of Mr. Baraka’s books and plays have long been out of print. He’s making them available for purchase through his recently setup website. I of course highly recommend supporting him, and owning his books. You can view his site here.]