BULLET – A classic, and on everyone’s list for a reason. 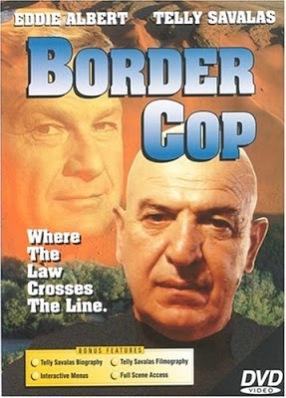 BORDER COP – The first few minutes of this 36 year old movie had my mouth agape. As It sports an unexpected and insane car chase sequence by anyone’s definition. Whatever they were paying the stunt man/men was not enough. The only car chase sequence in the film, it’s good enough on its own to earn a place on any list. BORDER COP is so many different and warring things together, it jumps genres so unexpectedly from a jaw dropping car chase movie in the first few minutes, to a low key drama, to a harrowing expose of business and cruelty both of the animal and human variety on the bloody US/Mexican border. A nearly 40 year old movie that sadly, and disgracefully is as relevant today as the day it was made. A solid movie.

RAID 2 – Written, Edited and Directed by Gareth Evans there is much to recommend RAID 2. It’s a great Martial Arts movie, sporting some of the most brilliantly choreographed fight and knife scenes ever put to film, it is also an incredibly violent (and convoluted) crime/gangster movie. In addition it also showcases one of the most bad-ass car chase scenes. Starting at about the 1hour 50 minute mark, when most movies have already finished, RAID 2 is just warming up.

THE SEVEN UPS – Philip D’ Antoni’s film, seen as something of an unofficial followup to FRENCH CONNECTION, sporting many of that film’s cast and crew and themes, is by far the superior film to the Academy Award winning FRENCH CONNECTION. The fact that the mediocre FRENCH CONNECTION has an Academy Award reiterates my thesis that the Academy has a tendency to reward films that reinforce or refresh for a new generation these racist mindsets and mentalities, often in heroic lights; From A BIRTH OF A NATION to THE JAZZ SINGER to GONE WITH THE WIND to MONSTERS BALL to FRENCH CONNECTION, the Academy is always happy to reward Minstrel Shows, films with Black Faces that are there to reinforce and present White Messages. THE SEVEN UPS Thankfully is not that type of film, and concerns itself strictly with telling a compelling crime film. Which it does in spades, complete with a car chase that starts around the 52 minute mark, and runs 12 minutes, that is easily the superior to the one in FRENCH CONNECTION; and THE SEVEN UP car chase can easily be ranked as one of the best of all time.

SABOTAGE – One of the latter day, post-governor Arnold Schwarzenegger movies, SABOTAGE is surprisingly a home run. David Ayer, a director I tend to feel is too heavy handed, here finds a story and actors and a co-writer that tend to ameliorate his often too unlikable protagonists and world view. Here Schwarzenegger leads a DEA strike force, up against their deadliest enemy. Besides being a solid action thriller this film also sports an insane 10 minute car chase scene. The actors really sell this 10 minutes and make this a chase scene that holds up.

BAD BOYS II – Michael Bay is often vilified, for reasons that seem to me to amount to people upset that his movies are populist entertainment. Of the 13 feature films he has done in the last 22 years, five are devoted to a toy franchise, and the majority of the rest standard summer action fare. But action fare done really, really well.

Michael Bay at the top of his game is a great filmmaker, and I think nothing highlights this as well as his first feature BAD BOYS and his last 13 HOURS.

BAD BOYS II however is neither of those films, being neither popular nor successful. It is definitely a misfire, it is too long and the comedy misses more often than it hits, leading to overlong cringeworthy scenes you want to fast forward past rather than laugh at. Trying to emulate the success of the first film, they get the mixture of comedy and action wrong. That said, even when the comedy fails, the action and visuals never do. I have always loved Michael Bay’s use of the camera, he uses a lovely panning, roving style that is simply exquisite. Michael Bay understands the essence of the Heroic and is able to convey that in the panning of a camera. And arguably it is in this flawed film that Michael Bay crafts some of the best and most beautiful action set-pieces of his career.

Woody Strode who spent a career in films directed by legends such as John Ford and Fernando Di Leo and Richard Brooks and Stanley Kubrick, always considered his favorite director and his favorite moment on screen, was his wordless, almost cameo appearance, in the opening of Sergio Leone’s ONCE UPON A TIME IN THE WEST.

Michael Bay is that type of director, a painter of romanticized heroism, of images that galvanize and rouse, and unfortunately a lot of that talent was buried for the last decade filming CGI robots, BAD BOYS II is a great reminder of what Bay can do when filming captivating actors and captivating places.

BAD BOYS II is a flawed movie, but it has moments of greatness in it. And the 10 minute car scene alone is worth marveling at more than once and is Michael Bay at his blockbuster best. And more than than is one of cinema’s best car chase scenes.