Things lost in the Fire, may yet be  found in the Ashes

“There was a silly damn bird called a phoenix back before Christ, every few hundred years he built a pyre and burnt himself up. He must have been the first cousin to Man. But every time he burnt himself up he sprang out of the ashes, he got himself born all over again. And it looks like we’re doing the same thing, over and over, but we’re got on damn thing the phoenix never had. We know the damn silly thing we just did. We know all the damn silly things we’ve done for a thousand years and as long as we know that and always have it around where we can see it, someday we’ll stop making the goddamn funeral pyres and jumping in the middle of them. We pick up a few more people that remember every generation.”
― Ray Bradbury, Fahrenheit 451

“Whence arose all the horrid assassinations of whole nations of men, women, and infants, with which the Bible is filled; and the bloody persecutions, and tortures unto death and religious wars, that since that time have laid Europe in blood and ashes; whence arose they, but from this impious thing called revealed religion, and this monstrous belief that God has spoken to man? The lies of the Bible have been the cause of the one, and the lies of the Testament of the other.”
― Thomas Paine, The Age of Reason

“Father… you speak with absolute assurance, completely convinced that your vision is the only proper way, and like all men who speak thus … you are mad.”
— Steve Englehart, MASTER OF KUNG OMNIBUS VOL 1

They were not actors, and they were not sports figures, they were creators and myth makers working in an oft castigated medium, but delivering words and images and concepts, that would transcend their newsprint origins and outlive naysayers.

This installment is dedicated to Bernie Wrightson. Over a year into his passing and I wanted to reflect on Wrightson, the artist, again: 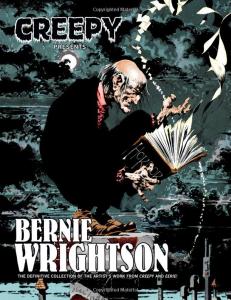 Bernie Wrightson had a suitably Baroque name for someone whose beautiful, exquisitely detailed and ornate artwork and sensabilities was the best of the Baroque meets the gothic. I’m an art lover, I own a large selection of art books from Dali to Duncanson, and Wrightson”s mesmerizing FRANKENSTEIN where he created full page plates to accompany Mary Wollstonecraft Shelley’s celebrated and cautionary tale, remains not just the only version of FRANKENSTEIN one needs own, but one of the most significant art books made in the latter half of the 20th century. 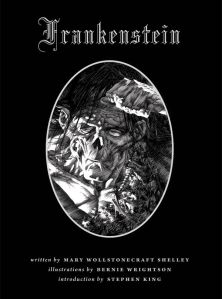 Wrightson quickly proving himself one of the preeminent Pen and Ink artists of all time, up there with the 19th century’s celebrated Louis-Auguste Gustave Dore and the criminally under-heralded mid-20th century Virgil Finlay.

Thankfully, Wrightson’s most lauded work, FRANKENSTEIN, often rumored of rather than seen, was republished by DARK HORSE BOOKS in the 21st century, in an even better quality version.

In this writer’s opinion it is a book, not just any American household should have, but all households should have. The myth of Frankenstein is old and oft told, but you will not find it better told in print anywhere, than in this pairing of Wollstonecraft and Wrightson.

It is currently out of print, but I see this book as one that Dark Horse will bring back in print. Especially considering next year, 2018, marks the 35 year anniversay of the book’s initial release.

As far as Gustave Dore, here’s a nice affordable coffee table overview of his work:

The Drawings of Gustave Dore:Illustrations to the Great Classics

This remains the best introduction and overview of his work, including many of his quality works that fail to show up in later versions. Unfortunately a softcover, however do what I do, pay a book binder to make a hardcover out of it.

And a few other departed genius that deserve mention in the above company… Segio Toppi, Franklin Booth and Basil Wolverton:

Sharaz-de: Tales from the Arabian Nights 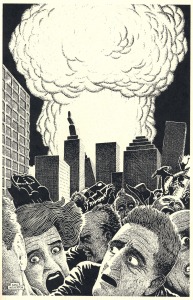 Creeping Death from Neptune: The Life And Comics Of Basil Wolverton Vol. 1

And some living, breathing pen and ink geniuses that you should be seeking out, buying their books, hiring for projects? Glad you asked, they are: 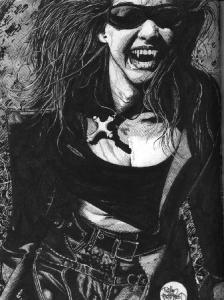 A very prolific and in-demand artist, Bradstreet’s MAXIMUM BLACK art book dates from the turn of the century. A new collection of his art, covering the work he has done in the two decades since, would make a welcome addition to this first book. 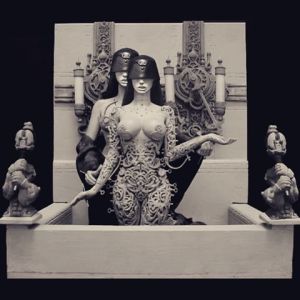 – A game, film, and dimensional artist, Chichoni does very little printed work. This is his only art book to-date. That it is also one of the best artbooks, only makes it more pressing that he does another one. His art is that good. 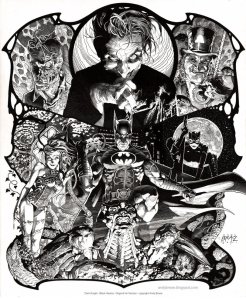 Andy Brase – This guy is going to be huge. Looking forward to his first artbook.

Stephen Bissette  & John Totleben ( yes I’m cheating here)- Bissette’s pencils married to Totleben’s inking, on DC’s revamping of floundering title SWAMP THING, with evolutionary writing by relative newcomer Alan Moore, and all of it mid-wifed into being by the late great Len Wen, remains, 30+ years later, seminal, ground breaking and unsurpassed work. And Bissette not only as instructor for new generations of creators, but as scholor and historian and reviewer and Indie Comic supporter remains an essential and insightful voice for the medium of words and pictures. His podcast interviews on a variety of shows, starting with the late Indie Spinner Rack, remains, like his artwork, top notch. I’ve sought out podcasts he has done, and each one reveals more about comics as hobby, as job, as calling, as artform, and as cultural touchstone.

Look for his podcast interviews on MAKING COMICS, INDIE SPINNER RACK, and DECONSTRUCTING COMICS to name some. And in addition he is a prolific reviewer and writer.

Geof Darrow – When you think of detailed, intricate artists, Geof Darrow’s name comes up near the top of the list. Long before there was an IDW publishing doing tabloid sized treatments of famous artists, there was Frank Miller and Geof Darrow ‘s ground breaking tabloid work for Dark Horse Books. A superlative addition to any library.

Like any list, this one is also a distillation of the writer’s biases, his experiences, his major passions, and his minor blindspots, as such it can by definition not be comprehensive, only revealing. Chalk up any omissions of your favorite pen&ink artist to my head and not my heart. Brevity demands limiting the list, but shine light on those I have missed, by leaving your comment of those past and those present… deserving of attention!