I don’t have cable. I jumped off the band wagon years ago, and really have not been seriously tempted to jump back on. I’m content with waiting for products to hit DVD, and in the interim there are a lot of great shows out there on DVD to try.

I did that with both season 5 and season 6 of Doctor Who. Watching the shows over a few nights rather than the dubious experience of lengthy waits over several months, to invest in a story that may end with a whimper rather than a bang.

Which is how I tended to feel about Moffat’s Dr. Who seasons. While an imaginative and talented writer of “done in one” episodes or two parters, as a season wide story arc writer, his work tends to be swiss-cheese and disappointing.

So the ability to find that out by renting the DVDs over a couple nights, rather than an investment of months of ‘live’ watching, suits the way I like to view seasons.

That said for those of you who do watch TV/cable here are the shows I think you should be watching this fall, ones I’m intrigued in picking up when they hit DVD.

LAST RESORT on ABC- Why I’m interested? 1/Stars Andre Braugher of HOMICIDE fame. 2/Premise of a naval commander and his sub crew hunted for refusing to commit mass murder, has me incredibly intrigued. 3/One of the few dramas/genre/thrillers on an increasingly whites only TV shows, that has multiple actors of color

TREME- I’ve heard much about this Orlean’s based show. So look forward to catching up with it on DVD.

DOCTOR WHO- While I think Moffat should stick to done and one episodes or 2parters, and give up his attempt to outdo Russell T. Davies with big elaborate universe ending story arcs (Note to Moffat…, you may be a more imaginative writer than Russell, he is the better story arc guy. And your tenure is suffering in an attempt to outdo Davies rather than play to your strengths.

Particularly Moffat’s take leaves a lot to be desired. It gets old, the elaborate universe ending story arcs and over-hyping the Doctor into a God like protagonist. It just reads as bs and failed one-upmanship, and leaving your character no place to go or grow to. It tends to get boring, and while it’s fantasy and some level of inconsistency is inherent, season 5 and 6 have plotholes you can drive a truck through), I am interested in seeing where Season 7 takes the show. If Moffat would play to his strengths, smaller, intimate, done-in-one stories or two parters… the show could be fantastic.

WHAT’S NOT
ELEMENTARY- Sherlock Holmes is a recovering smart-alec drunk, Watson is his Asian female Bodyguard and Watcher, and the setting is New York. Really?!! I’m not a huge fan of the BBC SHERLOCK series, it’s okay, I just don’t think the writing is always up to the strong acting and direction, so my objection to ELEMENTARY has nothing to do with that BBC show. The more great shows the better. My objection is, if you’re going to change everything about it that is Sherlock Holmes, why even call the character Sherlock Holmes? I have no interest in seeing it, the premise just sounds insipid. However I’m willing to be proven wrong. If it makes it a full season and people are raving about it I’ll pick up the DVD, but otherwise this goes in the “What were they thinking’ trash pile.

That’s all for now! Feel free to leave your own recommendations, comments! 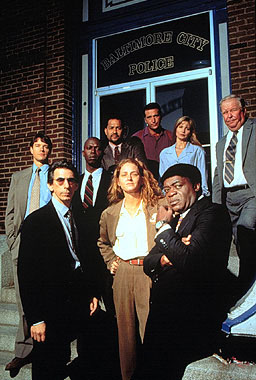 I’m on season 6 of Homicide, the next to last season… and man… am I stunned.

Seasons 1-3 were very good to great.

Season 4 faltered for me a bit, and season 5 for most of its run was an abortion.

Maudlin dreck, season 5 spent way too much time on making both Pembleton and Kellerman, incredibly annoying (The post stroke Pembleton storyline, some of the most annoying and overindulgent television, a pity fest) and incredibly unlikeable characters.

Season 5 was so bad I almost didn’t finish it, but luckily it ended strong with a fantastic final 3 or 4 episodes that just wowed.

And I’m happy to say season 6 ran with that momentum, tossing out all the rules and creating one of the most consistently excellent seasons of the whole series.You can feel the experimentation in this season, from great scripts by James Yoshimura and Yaphet Koto among others, to impressive direction not only by name directors such as Mary Harron, Steve Buschemi, Gary Fleder, but series regulars such as Clark Johnson and Kyle Secor.

With such experimentation it was a season that should not have worked… as it was sometimes incredibly erratic bordering on forced. The most deserving of that confusion, and that dichotomy is the final two episodes of season 6 directed by the now legendary Kathyryn Bigelow.

These two episodes have the thankless job of wrapping up all the loose ends of the previous seasons. It’s impossible to do that in two episodes and not feel forced, a praying Pembleton, perhaps the most egregious of the failings, but any discomfort is assuaged by the sheer bloody gall of these episodes. As a wrap up to a perpetually on the verge of cancellation show, leaves friend and foe, and the very nature of the show, torn apart. And what better way to end a show about breaking conventions, by breaking its own. Fantastic audacious television. It’s a loud violent explosive end, to a show that has always eschewed such easy answers, relying instead on the contemplative, and the cerebral and the thought provoking.

In many ways those two episodes should feel like a betrayal, and to a certain extent they are, but there’s enough invested here, enough challenged here, and indeed enough… violated here…, yes a violation of convention, which has always been a hallmark of Homicide, to make this still… Homicide.

This was designed to make a fine ending to the series. And flaws and all… it is.

However just when everyone thought the fat lady was singing, the network green-lit one more season of Homicide. Season 7.

Having not seen season 7 as of this writing, my gut reaction is season 6, the overall most solid, best season of the series, is the show spending everything it has. Leaving the “johnny come lately” season 7 nowhere to go, but to recycle plot points that season 6 has made moot.

I’ll be reviewing Season 7, the final season of Homicide next, and I’ll let you know if I’m right or wrong. I’d be happy to be wrong.

But final grade on HOMICIDE Season 6 : Grade… A-.

“When everything’s made to be broken, I just want you to know who I am”
-IRIS by the Goo Goo Dolls

I could never get into any of David Simon’s later series, neither THE BLOCK nor THE WIRE.

They lacked something that immediately galvanized me to his first series, HOMICIDE LIFE ON THE STREETS… most clearly characters I cared about. But also a certain idealism, a delineated, if murky, sense of fighting on the side of the angels, that comes with those who are tasked with that most crushing of jobs… to speak for the dead. As opposed to THE BLOCK about druggies, or THE WIRE about a drug war, waged by sides I found equally unlikeable.

And to be fair HOMICIDE was a Barry Levinson and Tom Fontana series, and that is why I think it works. They were the ones steering the ship on the property based on Simon’s book. And they brought a humanity, perhaps an idealism, all their own. And for me that’s what makes HOMICIDE work… the idealism, even when it falters, the idealism.

So I continue with my review of the show, begun sometime ago. This is season 3 of HOMICIDE LIFE ON THE STREET, Enjoy.

NEARER MY GOD TO THEE- The third season of Homicide starts off with a precredit sequence satirizing how Networks force sex into shows. And obviously that’s the case with this new season. Introducing a famale shift commander, and concentrating on Bo Felton’s unstable wife. At the heart of it a murder investigation of a good, devout catholic, this episode meanders, and loses the razor-point intensity that highlights the best of the first two seasons. The strengths of the show lost in a soap-opera inanity. C-.

FITS LIKE A GLOVE-The 2nd episode of the 3rd season continues with the investigation into the catholic killer, and back room romantic shenanigans. Continuing the concessions to the network of less cases per episode, and slower, soap-opera pacing. The dumbing down of Homicide. C-.

EXTREME UNCTION- The 3rd episode cranks up the season a bit. Whenever Andre Braugher is center-most, particularly in the box, the show sings; however the ludicrousness, salaciousness of the episode, the multiple personality killer, kinda torpedoes any momentum the episode has. Leaving something more talk show, than up to the levels of the series’ best. And of course the subplot of Bo Felton’s annoying wife continues to be tired and uninteresting. C+.

The 4th episode, CROSCETI by writer James Yoshimura rights the sinking ship of HOMICIDE. Being the first great episode of season 3, dealing with the death of one of their own. B+/A-.

THE LAST OF THE WATERMEN- Another fantastic episode, this one tinged with nostalgia and a great score. As Howard, sickened by the murderous city, seeks solace… off the prosaic waters of her childhood Chesapeake home. But finds murder, like rain, is everywhere. Great score. B+.

A MODEL CITIZEN-Talk of Romper Room. 🙂 Meldrick feels the first pangs of infatuation.And Pembleton is sued by a serial killer. This is a return to the multiple plot-lines of earlier seasons as quite a bit happens in this episode. B+.

HAPPY TO BE HERE-Another packed episode. As many story threads are pursued, Baylis’ continuing romance, Bo’s search for his family, the pursuit of the murderer of a newspaper publisher. An alternately fun and fantastic episode. One of Baylis’ best episodes. A-.