While the Criterion Collection is the most well known Boutique or Quality Curated Dvd/Blu-Ray label, coming back to physical media I was surprised to find there are new kids on the block, that arguably not just equal Criterion, but edge it out in terms of features and overall quality of packing, booklet, materials, etc.

One such Blu-Ray label is ARROW VIDEO. Following on the heels of SCREAM FACTORY getting me back into physical media in a major way in 2019, ARROW VIDEO was the next company I jumped in to with both feet. And is actually, SCREAM FACTORY aside, my favorite Blu-Ray label of 2019. And without doubt the label I purchased the most movies from in 2019.

Here Now are all the Arrow Video Blu-Ray movies picked up from Oct 2019 to now in February 2020.

You can make a huge argument that Arrow’s feature rich AN AMERICAN WEREWOLF IN LONDON was THE BEST single Blu-ray release of 2019. For me it was a MUST OWN! You may still be able to pick up copies here.

Great film! My first time seeing it, and is better than most films made today. Nice special features. Get it here! 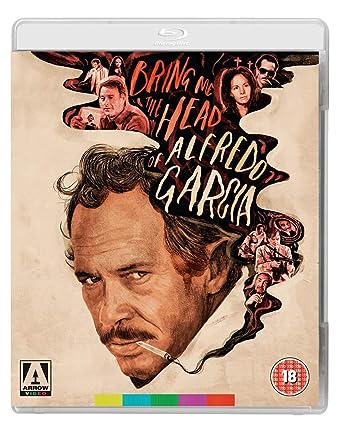 BRING ME THE HEAD OF ALFREDO GARCIA – Sam Peckinpah made several masterpieces, this is one of his best, probably only edged out by PAT GARRET & BILLY THE KID. This was his final word, on the avenging spirit made flesh. Get your copy here!

Lucio Fulci’s masterpieces are not his Ghoul/Zombie Films, these were the work of a filmmaker who had succumbed to the questionable tastes of the market (that had rejected his most beloved film, his attempt at art) and to an extent his own perverseness.

You want to see Fulci as a great director, then seek out LIZARD IN A WOMAN’S SKIN, DON’T TORTURE THE DUCKLING, SILVER SADDLE, MASSACRE TIME, THE PSYCHIC, BEATRICE CENCI (his favorite film) and arguably his best film ONE ON TOP THE OTHER (a homage to Hitchcock, that I actually think out does Hitchcock).

But that said, even these oft querulous and lowest common denominator peddling zombie films of his later years, have something to recommend them; namely Fulci’s unequaled imagination and real knack for composition of effectively baroque and unsettling imagery. Fulci knew how to drop your jaw, but also to stage a scene.

I quite, acknowledging its issues, I quite like CITY OF THE LIVING DEAD. And the Arrow presentation, with great commentaries, is the way to see it.

Pt 1 of 2. Come back next installment for the conclusion of my ARROW VIDEO coverage. And if you are enjoying this coverage of physical media spread the word, give a like, subscribe, and email or comment.