ALONG CAME THE DEVIL II – I put this film on my Amazon Prime watch-list the other night, never having seen the first film, the poster image on Amazon looked interesting, and the 3.5/5 rating looked promising. 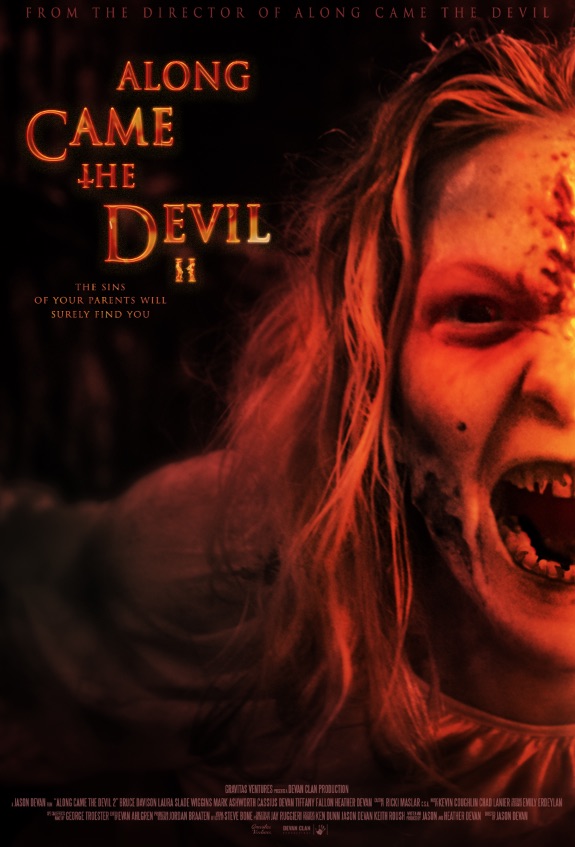 It was late when I watched it, or early.

And first I must admit, I am not now that force that had in days gone by moved heaven and earth, but what I am… I am. To roughly paraphrase Lord Tennyson.

Meaning I am of a milder temperament today, than of my reckless youth. And I am easier moved. I seek now in my old age, in my facts and my fictions, that no one dies badly, and that there always be a hero, to right wrongs.

So take that softness to note, and the hour, when measuring my feelings on this film.

I felt this film, was terrifying.

Much of horror, like in comedy, is setup and timing. And this film is not without failings, as portions of it seems to be telling of that unseen first movie, but those scenes never unhinge the central strengths of the film.

Namely it is well cast, convincingly even passionately performed, and I thought the Director/Writer Jason Devan and Editor Evan Algren masterfully used setup and timing, to create a chilling and effective movie. It is the work of a filmmaker, who understands viscerally the places in us that throb to the quick and the dead.

Is it a masterpiece? No. But not everything needs to be.

It is an effective, impressively made little chiller, that has more genuine chills in it than you’ll find in far bigger budget films, ala SINISTER, etc.

I went into this film, not having seen trailer or review, knowing nothing more than its title, and it rewarded me.

Go in likewise and you too may be, rewarded.

Grade: I’ve seen a lot of this type of film. Most are not very good, this one I hesitate not to call great. It is right up there with THE LAST EXORCISM PART II (far better than the first film); which I think is this type of film done, as well as I’ve seen it done. I guess the best thing you can say of a movie to really sell it, is having just finished watching it a few days ago, I want to see it again. That is in my book, the sign of an entertaining or compelling movie. B+.

It little profits that an idle king,
By this still hearth, among these barren crags,
Matched with an aged wife, I mete and dole
Unequal laws unto a savage race,
That hoard, and sleep, and feed, and know not me.
I cannot rest from travel; I will drink
Life to the lees. All times I have enjoyed
Greatly, have suffered greatly, both with those
That loved me, and alone; on shore, and when
Through scudding drifts the rainy Hyades
Vext the dim sea. I am become a name;
For always roaming with a hungry heart
Much have I seen and known—cities of men
And manners, climates, councils, governments,
Myself not least, but honored of them all,—
And drunk delight of battle with my peers,
Far on the ringing plains of windy Troy.
I am a part of all that I have met;
Yet all experience is an arch wherethrough
Gleams that untraveled world whose margin fades
For ever and for ever when I move.
How dull it is to pause, to make an end,
To rust unburnished, not to shine in use!
As though to breathe were life! Life piled on life
Were all too little, and of one to me
Little remains; but every hour is saved
From that eternal silence, something more,
A bringer of new things; and vile it were
For some three suns to store and hoard myself,
And this gray spirit yearning in desire
To follow knowledge like a sinking star,
Beyond the utmost bound of human thought.
This is my son, mine own Telemachus,
To whom I leave the scepter and the isle,
Well-loved of me, discerning to fulfill
This labor, by slow prudence to make mild
A rugged people, and through soft degrees
Subdue them to the useful and the good.
Most blameless is he, centered in the sphere
Of common duties, decent not to fail
In offices of tenderness, and pay
Meet adoration to my household gods,
When I am gone. He works his work, I mine.
There lies the port; the vessel puffs her sail;
There gloom the dark, broad seas. My mariners,
Souls that have toiled, and wrought, and thought with me,
That ever with a frolic welcome took
The thunder and the sunshine, and opposed
Free hearts, free foreheads—you and I are old;
Old age hath yet his honor and his toil.
Death closes all; but something ere the end,
Some work of noble note, may yet be done,
Not unbecoming men that strove with gods.
The lights begin to twinkle from the rocks;
The long day wanes; the slow moon climbs; the deep
Moans round with many voices. Come, my friends,
‘Tis not too late to seek a newer world.
Push off, and sitting well in order smite
The sounding furrows; for my purpose holds
To sail beyond the sunset, and the baths
Of all the western stars, until I die.
It may be that the gulfs will wash us down;
It may be we shall touch the Happy Isles,
And see the great Achilles, whom we knew.
Though much is taken, much abides; and though
We are not now that strength which in old days
Moved earth and heaven, that which we are, we are,
One equal temper of heroic hearts,
Made weak by time and fate, but strong in will
To strive, to seek, to find, and not to yield.

Deal of the Day!