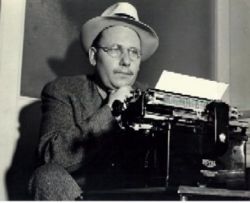 I’ve been listening to ADVENTURES BY MORSE today.

It is an oft cited series from the golden age of radio, that took me a while to finally sample. But I have to say, it earns its praise.

ADVENTURES BY MORSE, was the brain child of writer/director/producer Carlton E. Morse and a followup to his earlier and much lauded I LOVE A MYSTERY serial. ADVENTURES BY MORSE being a fun, exciting, thrill a minute serial, that regales the listener with the adventures of Capt. Bart Friday, a private investigator who travels the globe, unraveling the world’s greatest mysteries.

The series has been defined as a high adventure serial, and you would be hard pressed to disagree with that. This was written between 1944 and 1945, and is not just more exciting and worldly and informative and erudite, than most anything produced today (movies, tv, etc) it’s also far less formulaic. It has all the trappings of the formulaic, but Carlton E. Morse’s writing and situations and share inventiveness, sets these shows apart.

And thankfully all 52 episodes (as well as 2 audition episodes) are still around to wow, and impress, and entertain… a new generation.

You can pick these up a couple of places online, but be aware some of the episodes on Archive.Org are missing parts of the cliffhanger endings. Most notably in THE COBRA KING STRIKES storyline.

Thankfully Radio Lovers.com has complete episodes. Now onto reviews of the first 3 storylines:

THE CITY OF THE DEAD- The first 10 part serial is THE CITY OF THE DEAD, and introduces us to a great cast of characters, and a deep intriguing mystery, of a bell that rings where no bell is, a shrieking thing, a weeping man, and bodies that don’t stay buried. The show is too convoluted for its own good, you need a scorecard to make sense of the wrap up episode, but the awkwardness of the conclusion and some logic issues aside, the build up is fantastic. I couldn’t stop listening. An addictive, fun, and at times spooky serial. Great serial, well performed. Introduces Elliott Lewis as Captain Bart Friday. B+/A-.

A COFFIN FOR THE LADY- Is a little more conventional mystery, as compared to the fantastic and ghoulish elements of THE CITY OF DEAD, but the 3 part A COFFIN FOR THE LADY is gripping, and entertaining in its own right. It’s the little things that Morse does so right, the weight he gives to people’s injuries, or the ‘you are there’ richness of his storytelling. I’ve seen and listened to so many shows about people getting tied up, but none has expressed it as the near crippling experience that Morse does in these few episodes.

A lot of times in entertainment, there is no weight to the perils. Someone is stabbed in one episode, and is climbing mountains in the next, not so with Morse, he’s ever aware, ever making you aware, of the strains of flesh, and the demands of nature, which gives his plots a gravity, and his characters a reality, they would otherwise lack. A great little serial. B+.

THE COBRA KING STRIKES- Returns to the ten episode format, and it’s a doozy. A new actor plays Captain Friday, David Ellis, but he does it effectively. Took me a couple episodes to get into his leaner, less gruff interpretation of Capt Friday, but his take quickly becomes perfect for this camaraderie rich storyline. And the sizable cast is fully realized and fleshed out, in this tale of a Cambodian odyssey to uncover the remnants of a once and perhaps future Asian empire. Captain Friday is onboard to put down any such uprising. While the Captain is the agent of suppression, there’s enough differing perspectives here to make the episode surprisingly rich, and surprisingly elaborate. This is the one that archive.org has butchered copies of, but it’s worth getting the full episode, as this one is every bit as engaging as THE CITY OF DEAD, and does it one better by having a great final episode. A recommended listen. A-.

Well that’s our review for this installment. Head over to RadioLovers and Archive to check these shows out for yourself. And tell them HT sent you! 🙂