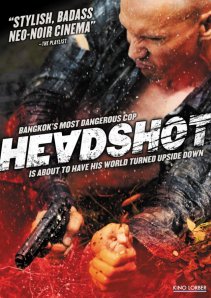 HEADSHOT-Needlessly convoluted with a purposely fragmented and confusing structure, no doubt aping such films as MEMENTO, there’s room for frustration and dislike when watching director Pen-Ek Ratanaruang’s HEADSHOT. However it is, for much of its running time, done and played well; and the central conceit such an intriguing idea, that it transcends mimicry and suspect storytelling, to be an involving film in spite of itself.

Stylish and existential, this is a very different crime thriller, that has a voice over (a film noir trope for this new age film noir) that is compelling.

The movie does lose momentum mid-way through, forgetting to use in any meaningful way or examine the interesting idea of the title character’s affiction, and becomes a rather ordinary and plodding man on the run film.

So a film not without its failings but one that has enough intriguing moments to transcend those failings, and have you interested in the end. Grade: C+.