Universal, Four years into their very successful Horror cycle/franchise (that began in earnest with 1931’s DRACULA)  released this (unknown to me until today) entry, THE MYSTERY OF EDWIN DROOD. 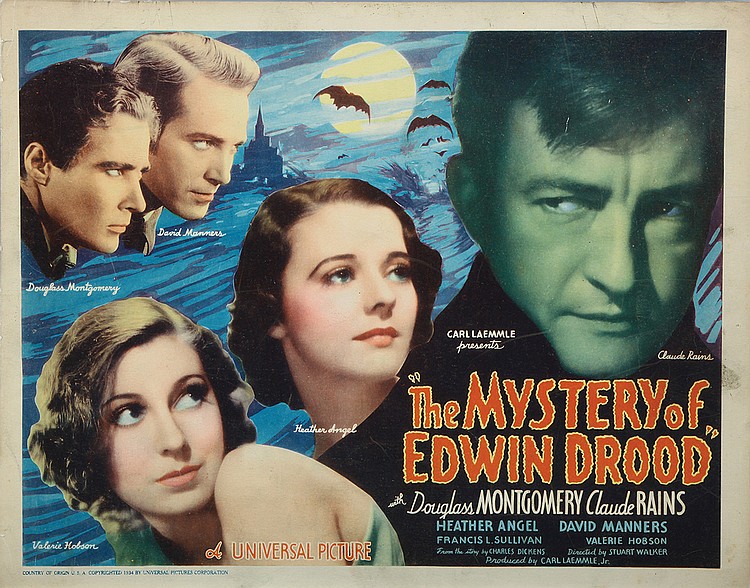 I go into movies knowing as little as possible, beyond the star and general genre; this way (in my estimation) gives the movie a better chance to deliver unexpected moments to the viewer. so I picked up the THE MYSTERY OF EDWIN DROOD from DVD/Blu-Ray distributor KINO LORBER largely because it was a horror-melodrama starring Claude Rains of INVISIBLE MAN fame, and it sported an audio commentary.

Well having watched it I have to say… “they are real, and they are magnificent”.. sorry, old SEINFELD reference.. but yes, the movie is magnificent. Just over the top in every way you can appreciate about these quasi pre-code Horror movies (made after the formation of the code, but before its rigid enforcement, post 1936).

While it is hard to top Rains’ iconic INVISIBLE MAN portrayal, his role here, his performance, even almost a 100 years removed from when this film was made, still hit me as audacious, and brilliant, and jaw dropping.

I enjoyed this film immensely, from the story, to  all the performances, to the direction. This was Grand Guignol film-making defined. And done by a director that had only one other genre film of note, THE WEREWOLF OF LONDON.