Start with the  FANTASTIC FOUR OMNIBUS 1,2, & 3. A great way to get into the early issues. Click the images to see more on the titles covered. 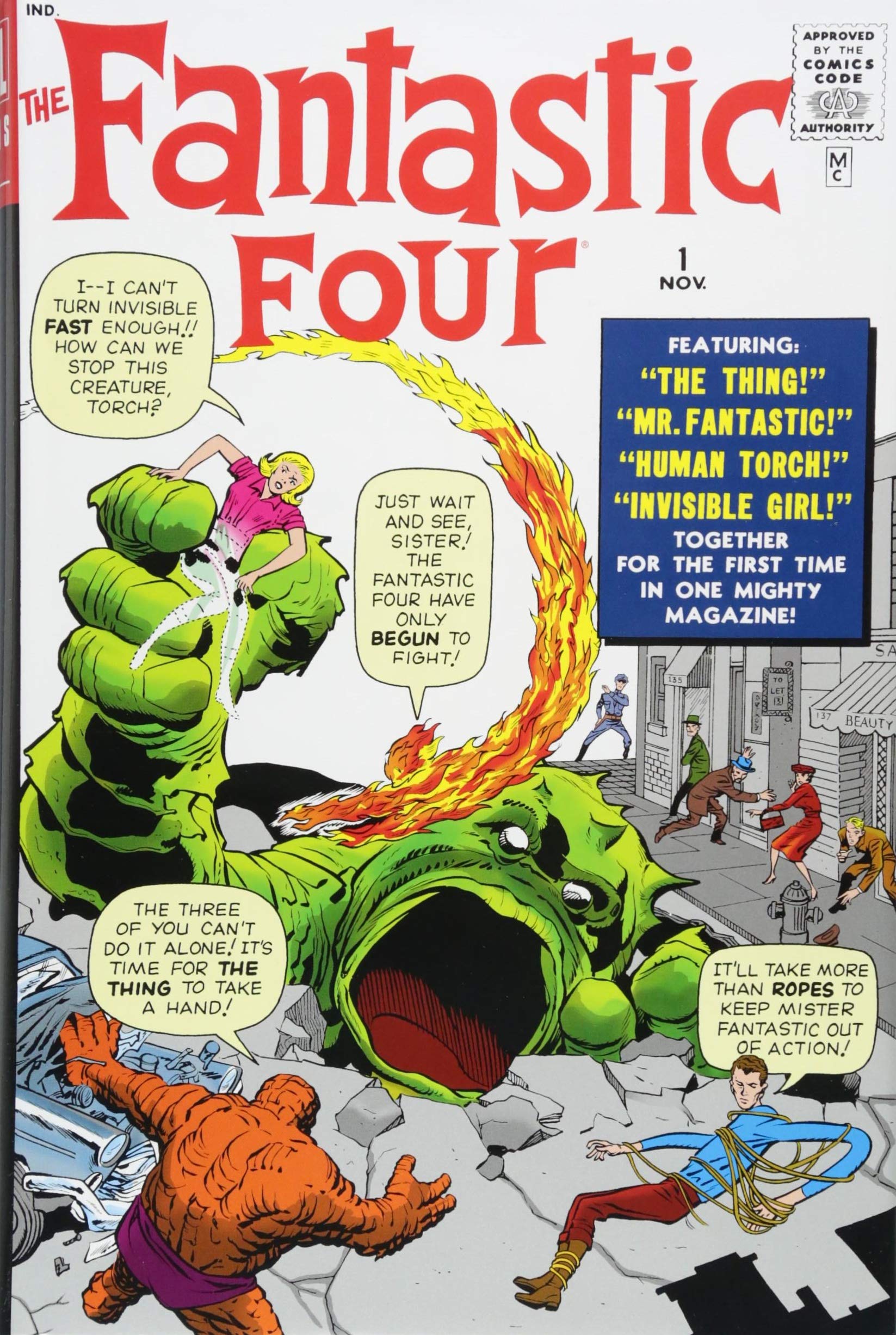 They were visionaries. Explorers. Imaginauts. They were Stan Lee and Jack Kirby. And like the Fantastic Four, they continually strove to overcome the impossible and achieve the extraordinary. Now, the first three years of their landmark run are collected in one oversized volume. This keepsake edition also includes all original letters pages and pinups, critical commentaries, a historical overview, and other DVD-style extras. 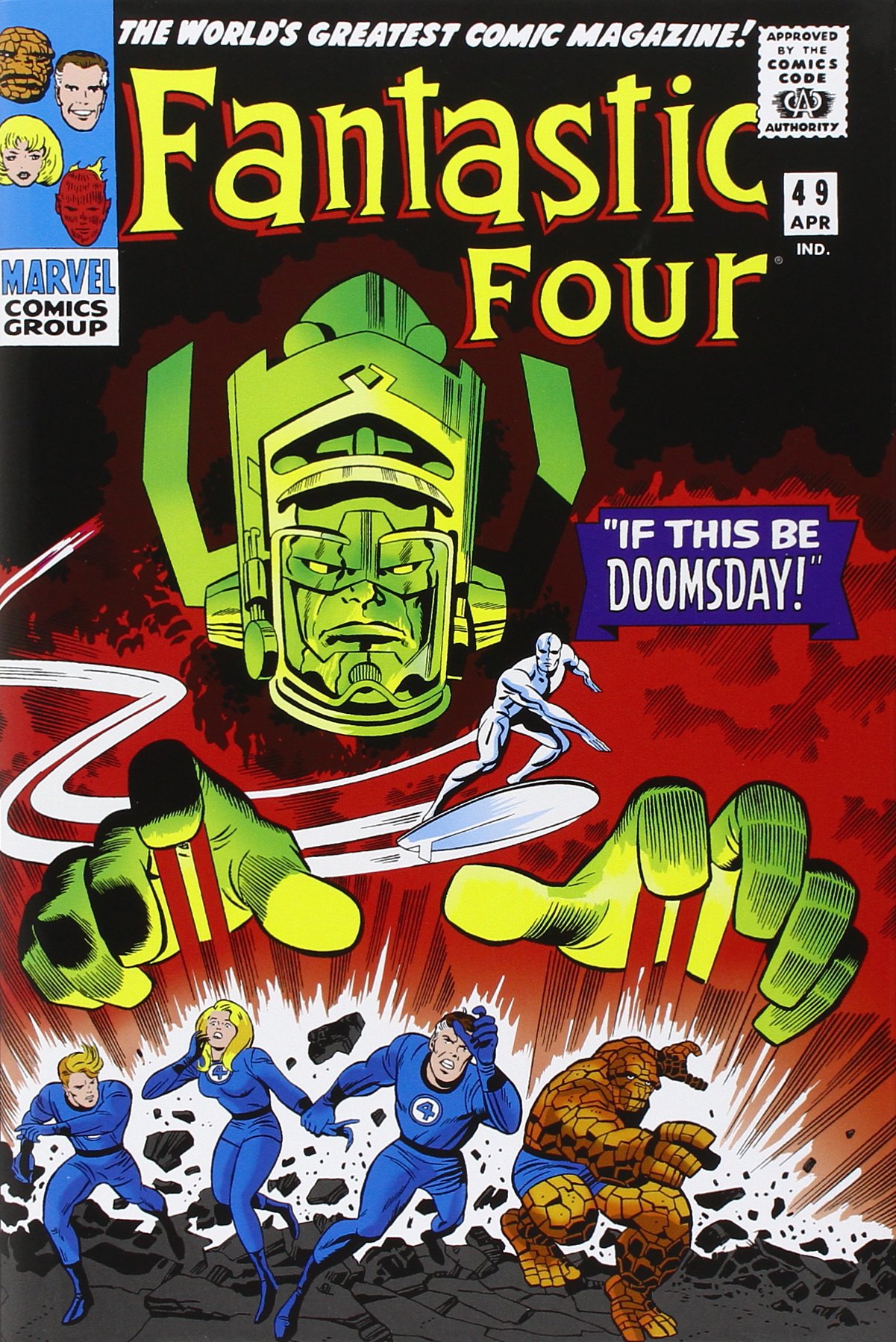 Collecting the greatest stories from the World’s Greatest Comics Magazine in one, massive collector’s edition that has been painstakingly restored and recolored from the sharpest material in the Marvel Archives. 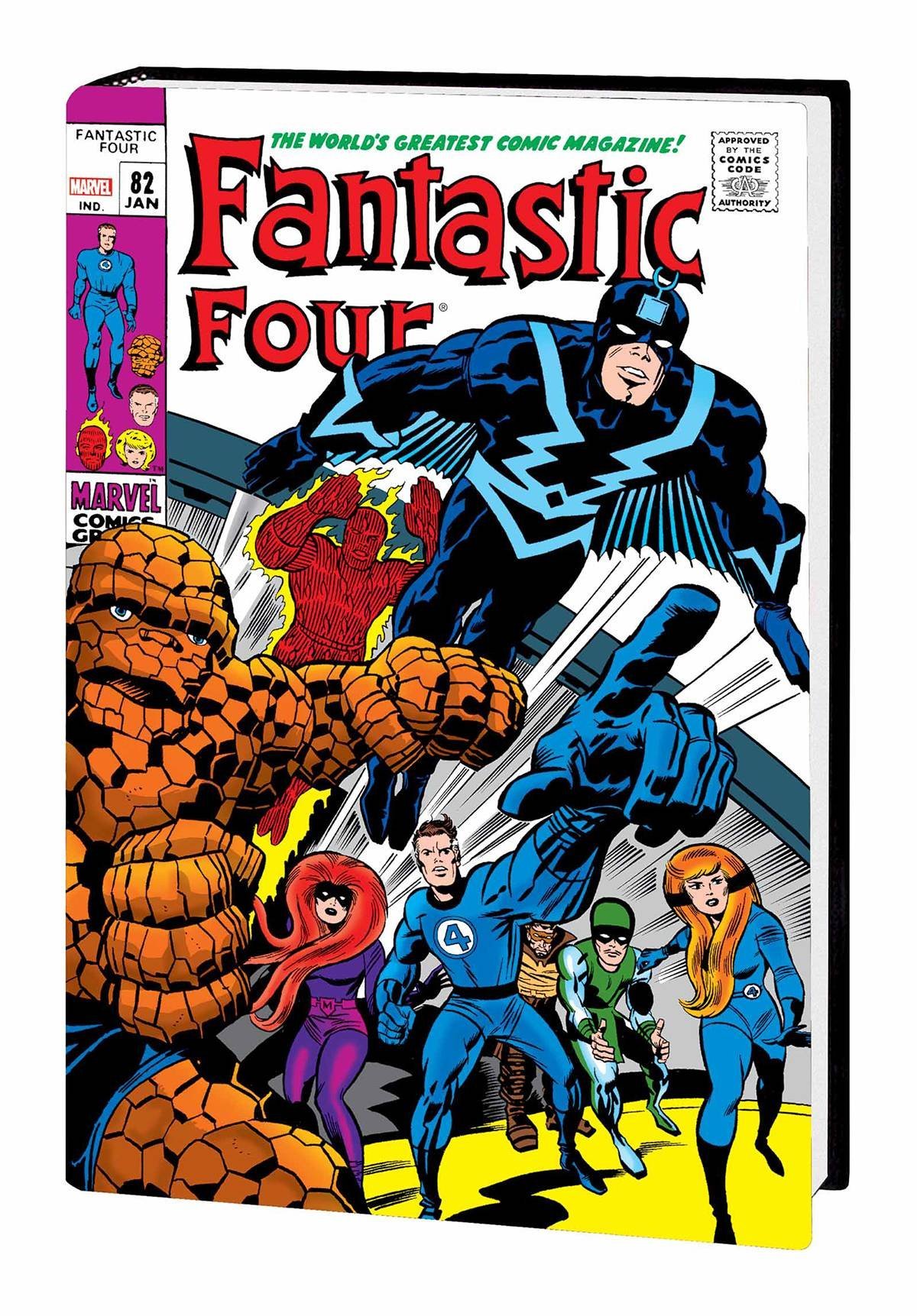 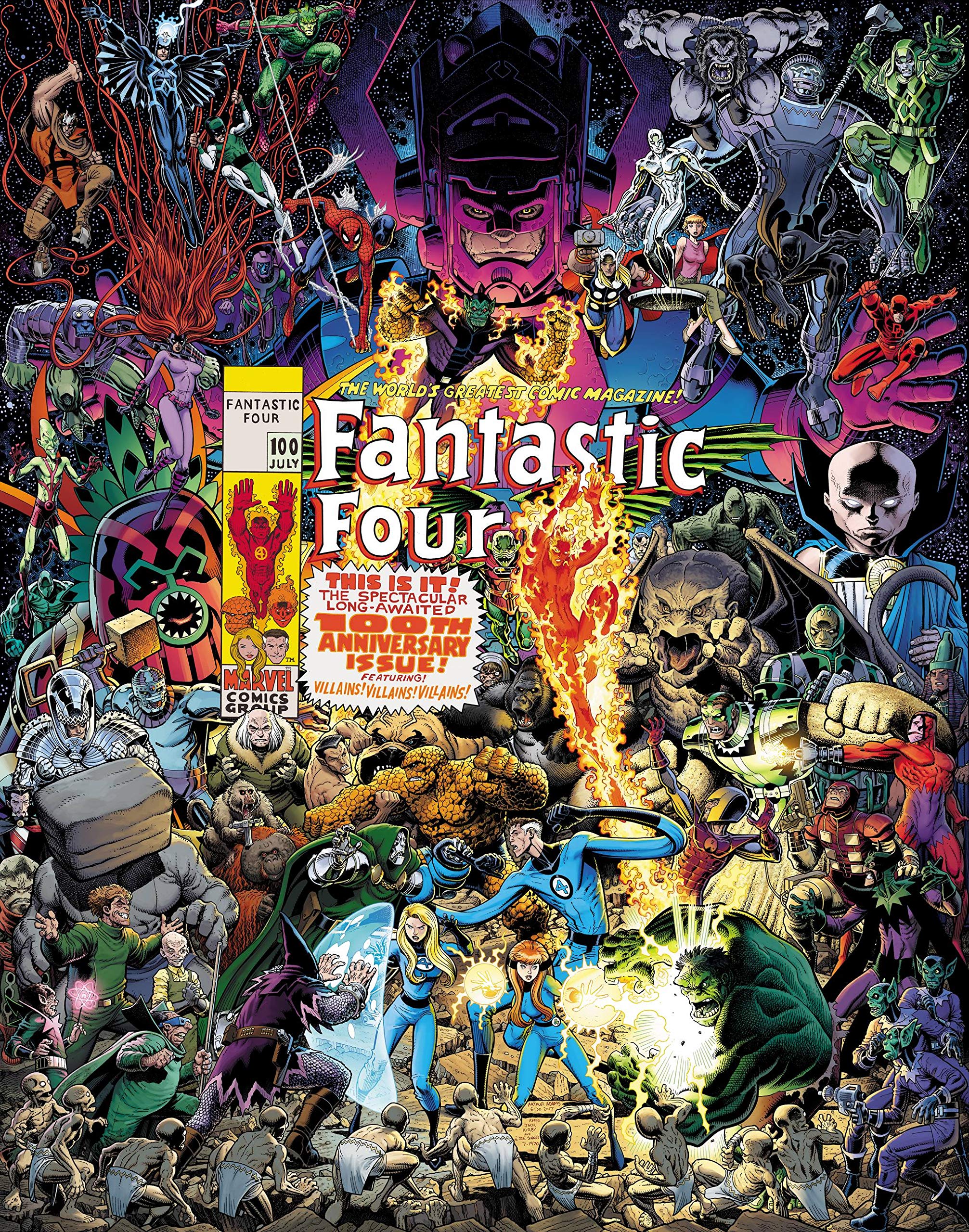 Celebrate 60 years of the World’s Greatest Comics Collaboration! Stan Lee and Jack Kirby conclude their record-setting tenures on the FANTASTIC FOUR, the book that birthed the Marvel Universe! In Kirby’s final issues, Doctor Doom lurks in the shadows, the FF save Apollo 11 from an alien threat, and the Sub-Mariner and Magneto team up to attack our heroes! Then, Stan Lee is joined by Marvel art legends John Romita Sr. and John Buscema to forge a new future for Marvel’s first family! Along the way, the Thing battles the Hulk, the Surfer is taken captive by Galactus, and the Overmind menaces Earth — leading to the strangest event in Marvel history: Doctor Doom joins the FF?! Guest-starring Black Panther, the Inhumans and more!

Okay now onto the issues you can afford to pick up in issue form, and the ones i recommend having:

FANTASTIC FOUR 161,162,163,164- These issues completely wowed me as a kid, and continue to entertain me as an adult. Simply great work by the team of thomas, buckler and sinnott. 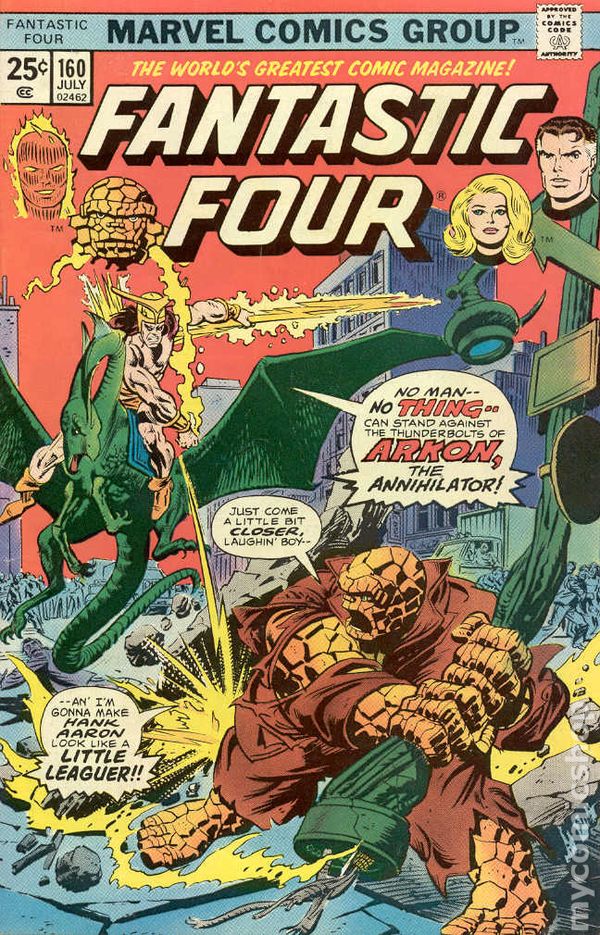 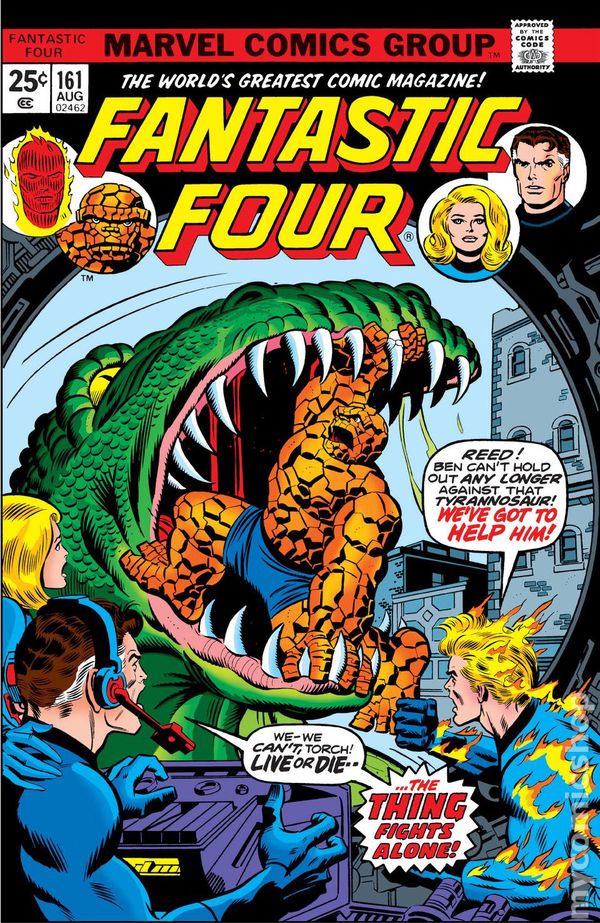 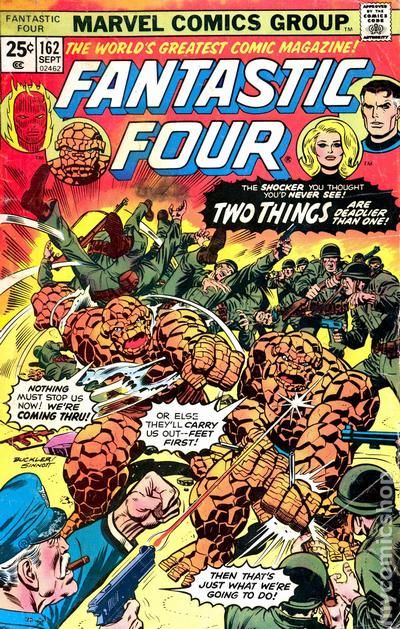 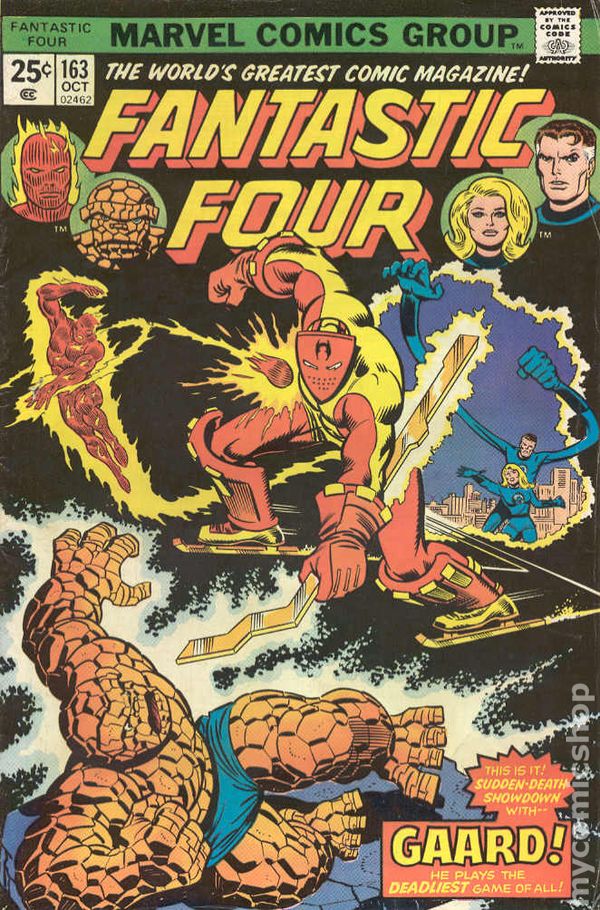 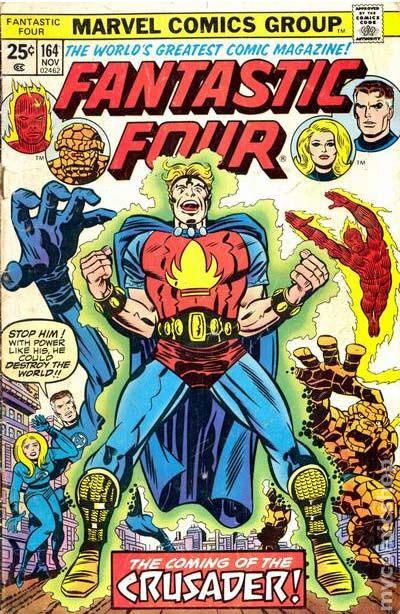 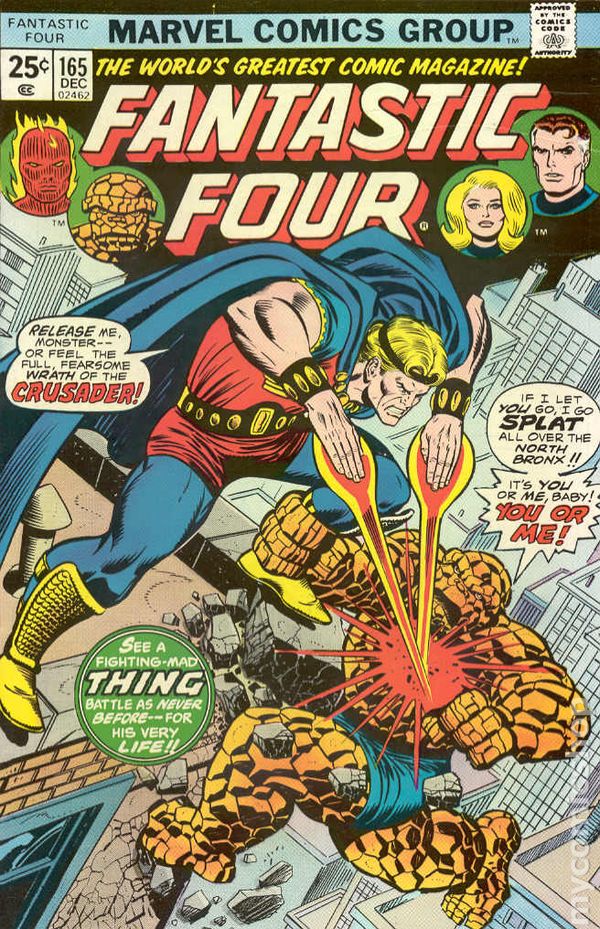 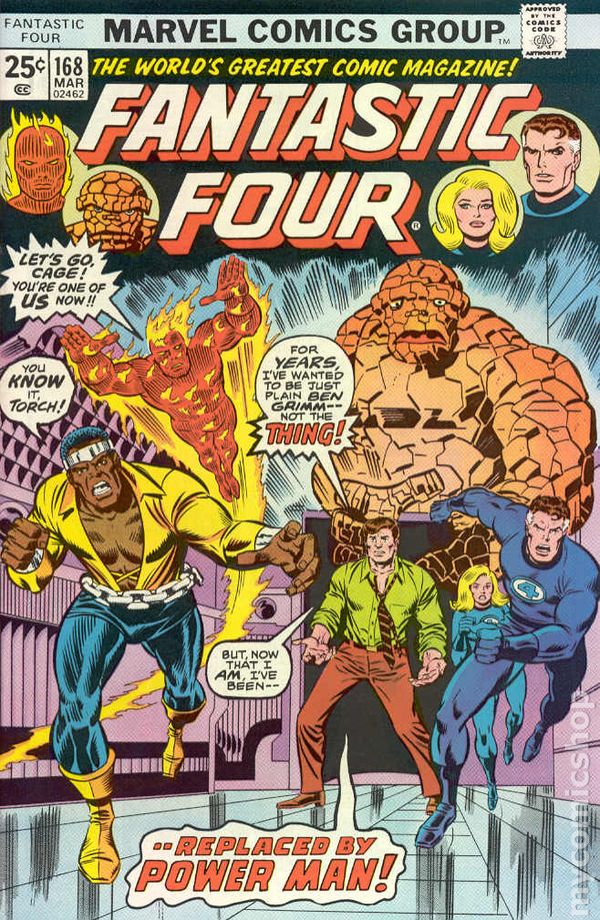 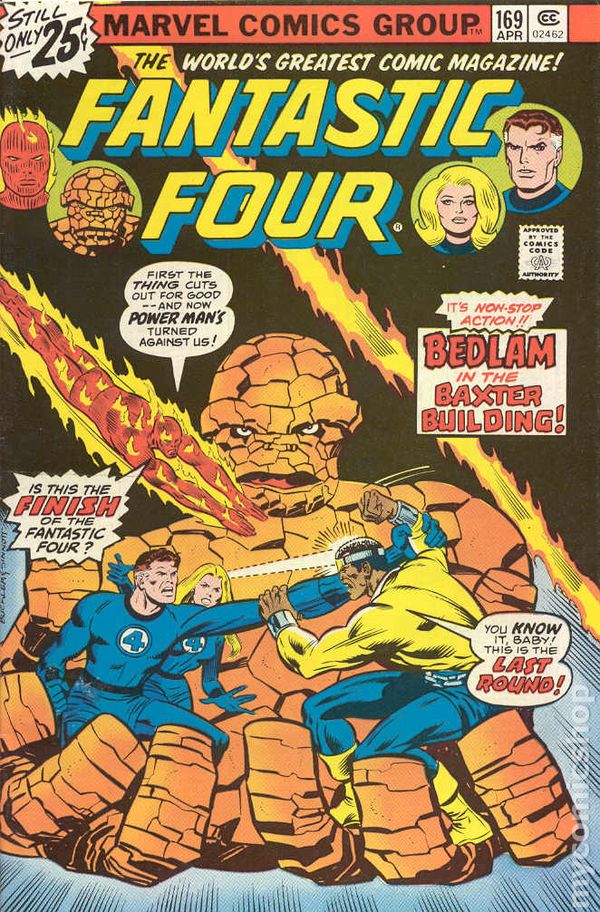 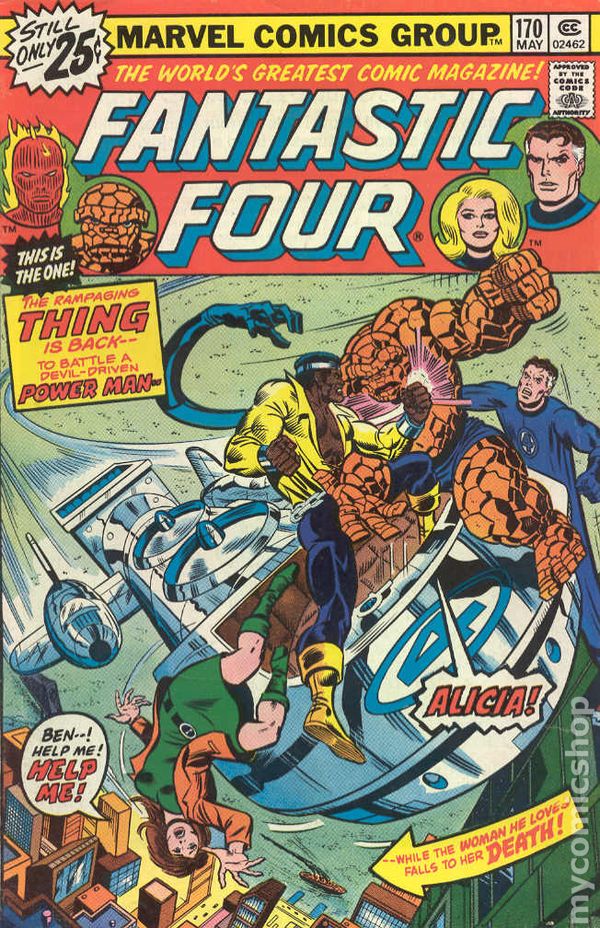 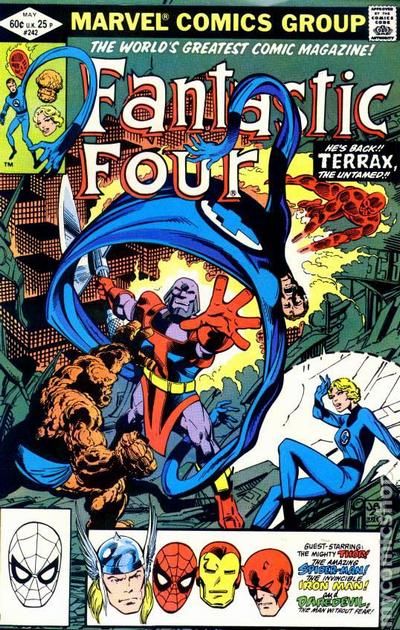 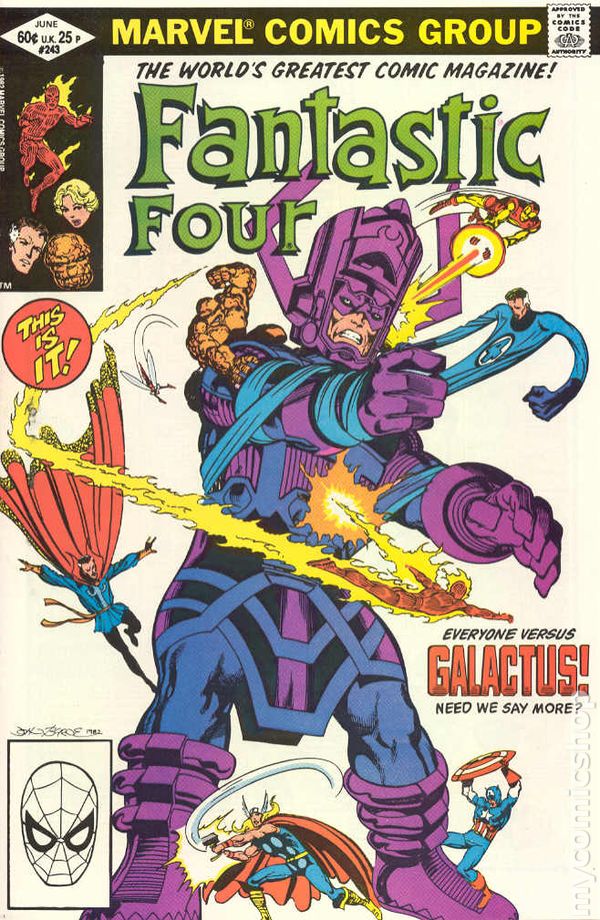 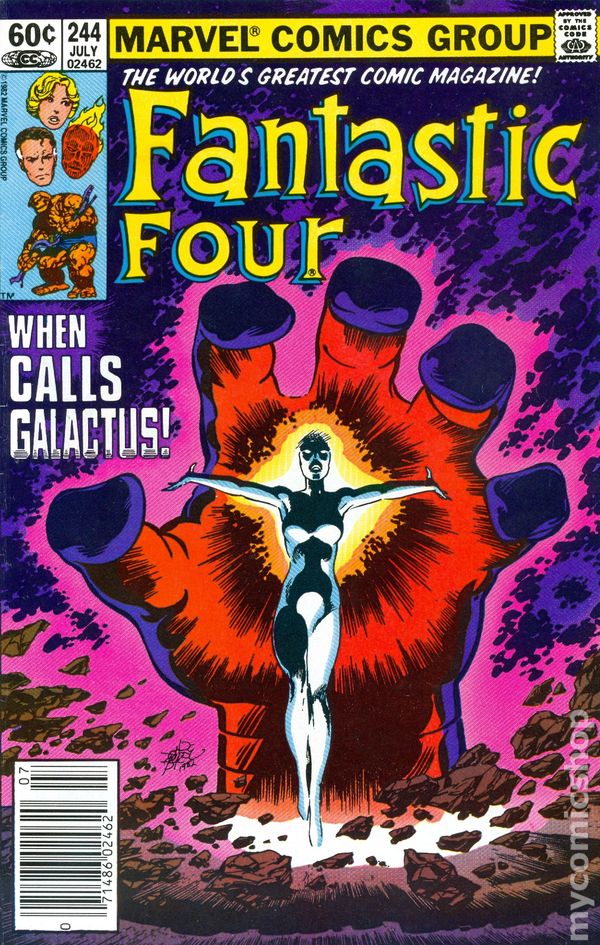 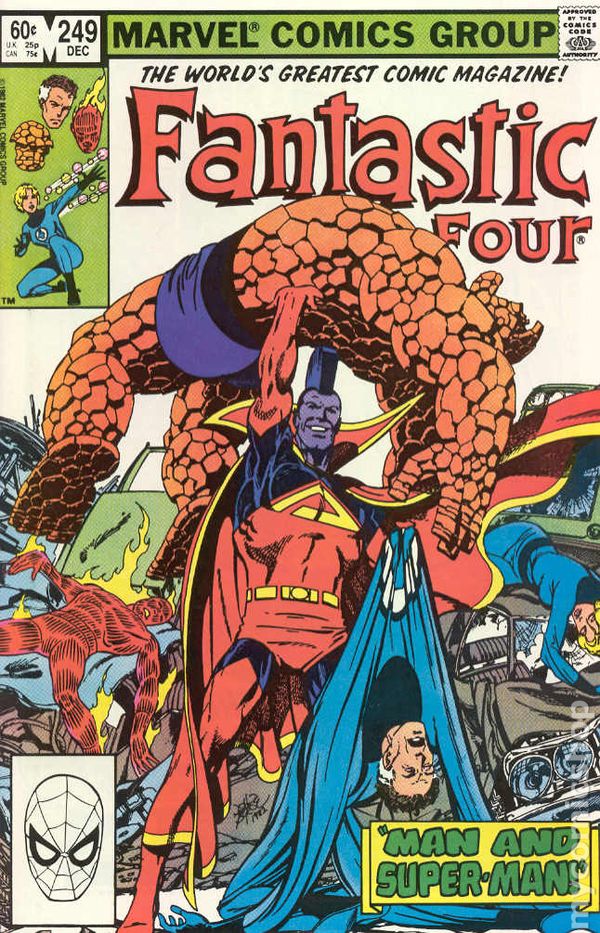 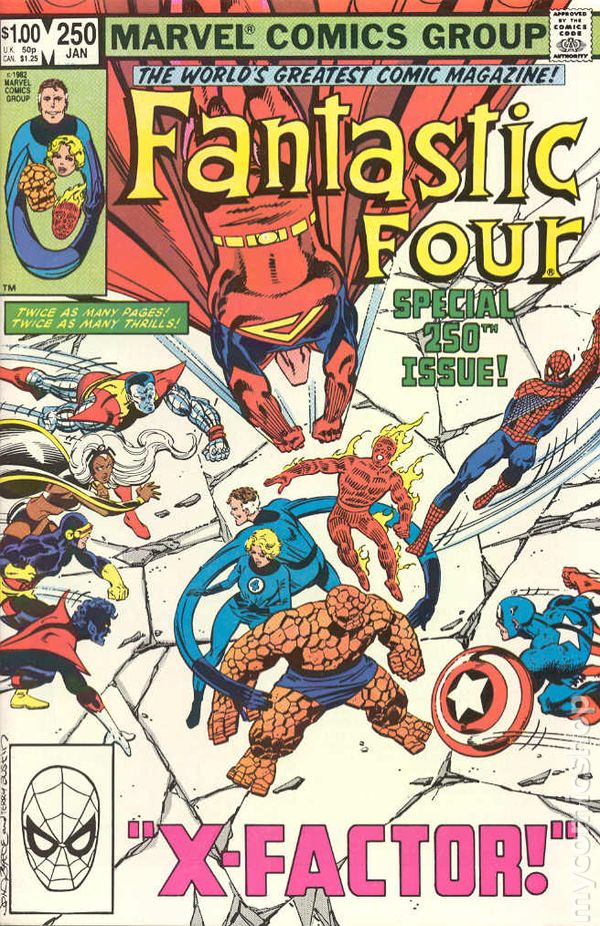 For my money John Byrne invented the concept of wide-screen entertainment with his seminal early work on AVENGERS 164 thru 166. This is him a decade later, showing he is still the bar, by which super hero action will always be measured. 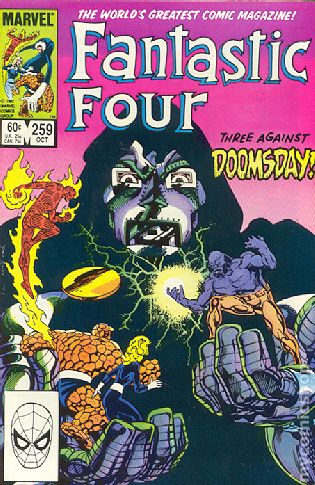 Without argument John Bryne was one of the best writers and artists on Fantastic Four (Right up there with Stan the Man Lee, Jack King Kirby, John Buscema and Roy Thomas ), but until you go back and revisit his lengthy run on The World’s Greatest Comic Magazine’you forget exactly how good he was. Issue 251 thru 265 is really one large, fluid story about— families lost and families found. 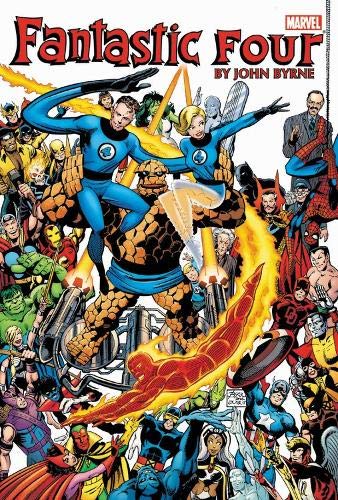 It was the world’s greatest comic magazine – again! Not since the days of Stan Lee and Jack Kirby had a creator so perfectly captured the intense mood, cosmic style and classic sense of adventure of Marvel’s First Family. Fresh off an earth-shattering and reputation-making run as penciler on UNCANNY X-MEN, John Byrne proved his writing talent was every bit the equal of his art as he pulled double-duty on FANTASTIC FOUR, launching Reed, Sue, Ben and Johnny into realms of imagination and wonder into which few creators before had dared to travel. From the four corners of the globe to the farthest reaches of space to the deepest depths of the Negative Zone, the FF face off against foes old and new – including the Dr. Doom, Galactus and Annihilus! Plus: The FF aid the Inhumans, bid farewell to the Baxter Building, don new costumes and celebrate their 20th anniversary in style as Byrne reminds us all there’s a family at the heart of this team of adventurers! 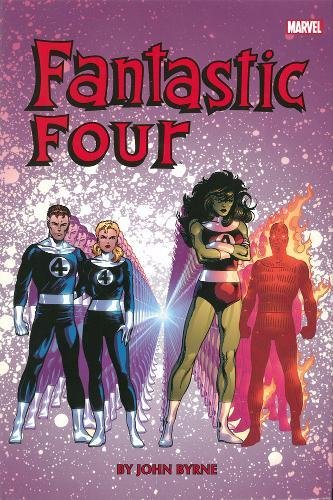 Superstar John Byrne’s legendary run concludes with one of the most innovative periods in Fantastic Four history! The sensational She-Hulk replaces the Thing, Sue Richards becomes the Invisible Woman, and Mr. Fantastic is tried for crimes against the universe! Also featuring the return of Dr. Doom, the fate of Reed and Sue’s unborn child, the resurrection of Jean Grey, and more — as the FF confront deadly foes including the Mole Man, Dr. Octopus, Terminus, the Beyonder, Mephisto, Psycho-Man and Annihilus! Plus: the unfinished “Last Galactus Story,” reprinted for the first time!

The original first run of the FANTASTIC FOUR ran 416 issues. For my money you can stop reading with the recommendations in this post. The series never gets better or as good as the issues listed above.

Well this post was a good amount of work. If you enjoyed, then please like, subscribe, comment, email, and use the links. It is all apprecaired! Hope all you gals and guys are doing great!!!