Re-watching CLIMATES Zeitgeist dvd today, over a decade after its release, it is visually still astonishing. Now compare that to the streaming version of CLIMATES that is on Amazon Prime, and it is like comparing night to day. The version on Amazon Streaming is a butchered faded print.

And it is a COMPLETELY different experience seeing this film in a visually arresting print, and a compromised print. If my first introduction to this film was the streaming version, I likely would never have finished the film, and definitely would not be a Ceylan fan. The power of that film IS the visuals, is the face as landscape. And all that beauty is lost in the streaming print.

Now of course Streaming CAN produce a great print to show, however that is the flaw of streaming, you never know what you are going to get. You are always at the mercy of multiple gatekeepers, and their economic or political whims of the moment. Whereas I direct someone to a well mastered DVD or Bluray, that presentation is locked, it is a certainty (barring scratching or breaking the physical media).

As I say, streaming is fine for sampling and discovering new things, but as far as revisiting something you love, and being able to revisit it periodically and be certain of what you get; in an age of studios editing content, licenses expiring, quality being throttled down due to too much traffic, or weather, or cost, there remains no substitute for a quality DVD or Bluray.

I would urge you if you have not seen Ceylan’s CLIMATES, do not see it via streaming. It literally is not the same movie. The images, the held stares, the light and water glistening on skin, this is the movie. And to not see those things, in rich detail, is to not see this movie.

Pick up the Zeitgeist Film DVD, while you can grab it for between $20 and $40. I was telling people to pick up this film when it was $10 on Amazon. The smart ones among you did. The past will always be future, and future will always be past. Meaning studios in the past destroyed films and tv shows, the masters, the original prints, because they were short sighted and could only see these things as product rather than art.

Product that is no longer cost effective, historically companies destroy. Much of the history of cinema and television, that studios are now happy to exploit on their various streaming services, exists only because of collectors, people like you and I, who preserved the physical media.

That said, companies remain ruled by a mercenary view, so even today, if it is more cost effective for them to alter or edit, or make unavailable some items— they will. So once again, in a different way, the consumers access to content is at risk. And then as now, the answer is physical media.

God blessing the child, that’s got his own.

That’s got his own. 🙂 [A snippet of a song for those of you who don’t catch the reference 🙂 ]

So yeah, click the link. And if there are any copies left, grab the Zeitgeist DVD of CLIMATES. 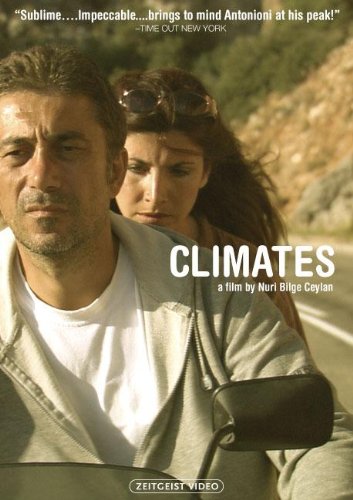 And for a look at all of Ceylan’s filmography go here!