If you are not watching CEREAL AT MIDNIGHT you are missing out on one of the essential resources for movies on DVD and Bluray, especially of the classic B movie and cult status variety. CEREAL AT MIDNIGHT celebrates those works of yesteryear that are worth picking up, even in this age of streaming.

His latest episode, and he sold me on purchasing the UNIVERSAL HORROR COLLECTION VOL 1 on Bluray.

Mostly because I am a huge fan of THE BLACK CAT. What is the BLACK CAT you ask? Well beyond being the name of the famous Edgar Allen Poe Short Story, it was also the impetus for many films of that name. 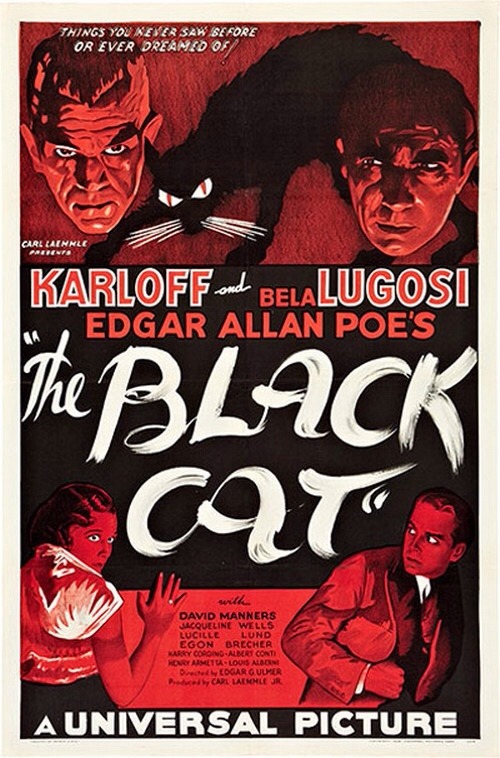 This 1934 Edgar G. Ulmer directed BLACK CAT (which only uses Poe’s story as a aesthetic, to  go places even Poe dared not) is the best of the half dozen or so feature films to use that title.

Powered by a lurid, and haunting, and maniacal story by Edgar G. Ulmer and Peter Ruric, the film grabs and does not let go. Ruric would never write anything as memorable or deranged or sublime again. Which leads me to believe even though the script is credited to Ruric, that it was Ulmer’s hand you see in it.

Ulmer, an unfortunately little remembered director, was one of the best directors of the strange and the avant-garde (experimental, forward looking), and the disturbed. This film fits perfectly in his mold. And with the best combination of big time studio, large budget, iconic stars, talented craftsmen, that he would ever get, he produced his best movie.

BLACK CAT beyond being Ulmer’s best movie, is without argument the best of the Karloff and Lugosi collaborations, and is arguably the best UNIVERSAL movie, right up there with masterpieces such as BRIDE OF FRANKENSTEIN and THE INVISIBLE MAN.

Ulmer’s BLACK CAT is so stylized, and so paired to the bone, that like the short story it derives its impetus for, it is entirely possessive of your attention and your awe. And even though I consider BRIDE OF FRANKENSTEIN a masterpiece, there is something even more heightened and hypnotic in Ulmer’s BLACK CAT.

Both are films I consider seminal films, masterpieces of mood, and must own films. And i have owned both films for years in DVD, as generally speaking I do not see the need to upgrade to Blu-ray with these earlier 4:3 Black and White films. However with this new Blu ray also sporting multiple new commentaries, it is worth the double dipping for me.

If you are still deciding check out the video below, and subscribe to the CEREAL AT MIDNIGHT youtube channel… and tell them HT sent ya!