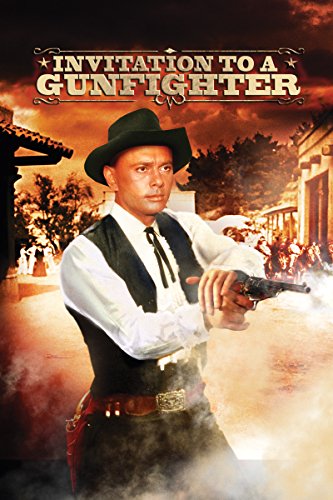 Written, directed, and produced by Richard Wilson INVITATION TO A GUNFIGHTER is in many ways as smart and audacious and daring a film in 2018 as it was in 1964.

That is the definition of a classic.

The third and last and arguably best of Wilson’s thematic ‘COMING STORM’ Trilogy that began with his debut film THE TROUBLESHOOTER (1955) and continued with the stranded island film RAW WIND IN EDEN (1958), INVITATION TO A GUNFIGHTER takes the themes of secrets and simmering tensions and hypocrisies boiling under the placid surface, revealed by the unexpected introduction of a stranger, and adds the backdrop of the civil war, and the question of slavery, regional disputes, ethnic and cultural disputes, and gender and class clashes to the mix, to create a film that plays more as Shakespearean Tragedy than simple western.

Yul Brynner arguably never gave a bad performance,and here he is in especially fine form as the complex  Gunfighter Jules Gaspard (small j, the s is silent, the d is silent). Janice Rule as Ruth Adams, George Segal as Matt Weaver, and Pat Hingle as Sam Brewster round out the major storm fronts around which our story revolves.

It is a film refreshingly without easy heroes or villains, with most of the characters, like most of us if we are honest, caught somewhere in between.

It is a film you can see for free, as of this writing, if you have streaming and the Roku Channel. However, once seen, it is a film deserving of owning as physical media, DVD/Blu-Ray. It is a film that should not have to depend on active Internet connection, or streaming licensing deals for you to view.

Watch it for free on streaming than get your copy, here: