Amazon has all four of Amando de Ossorio’s little seen but well regarded quartet of Blind Dead films, courtesy of Amazon Prime, so you can try before you buy. 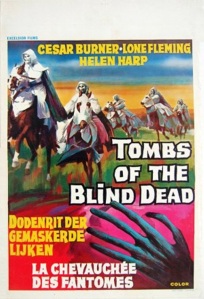 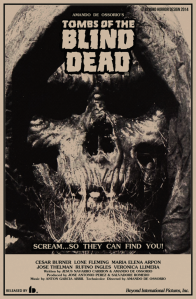 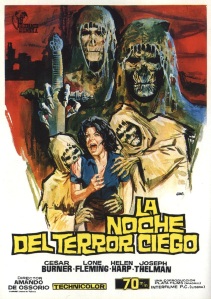 La Noche Del Terror Ciego (1971) – THE NIGHT OF THE BLIND TERROR renamed for North America to the surprisingly brilliant title, (and the title that has defined the series) THE TOMBS OF THE BLIND DEAD, was an international success and put its director Amando de Ossorio and Spanish Horror on the map.

The titular protagonists were so haunting, the character design so inventive, that it spawned three equally well regarded sequels.

Finally watched I can see why this film series, closing in on its 5th decade, is well regarded. Given the time period and obvious limitations of budget, the director, Amando de Ossorio manages to create a wonderful atmosphere, iconic villains, and intriguing characters and story, imbuing a new intriguing twist, onto the well trod myth of the living dead.

The three sequels are: 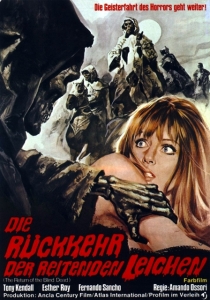 THE RETURN OF THE LIVING DEAD 1973 ( The original Spanish title, ATTACK OF THE BLIND DEAD being superior to the American title) 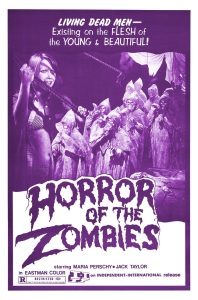 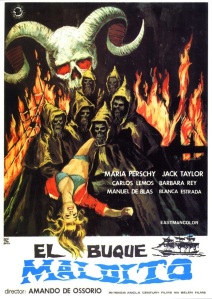 THE GHOST GALLEON  1974 ( Known in its original title, EL BUQUE MALDITO, as THE DAMNED SHIP) 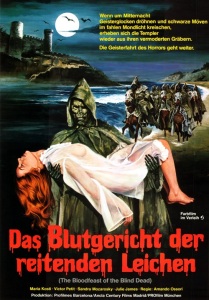 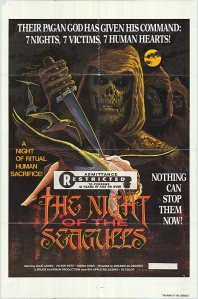 and finally NIGHT OF THE SEAGULLS 1975 (The only movie in the series, translated literally from the Spanish).

Now you can see all 4 films on Amazon Prime. Now be careful, there are multiple copies of these films on Amazon, most of them have a cost to them, however do a search and find the movies without a poster image and those will be the free ones.

Then watch all four and enjoy and if as impressed as I am, and ready to own the DVDs with special features, then go here: