UNA NOCHE – A lushly photographed look at young Cuba prior to the return of Capitalism. While many extol the economic virtues of Capitalism’s return, including one of the protagonists of this film seeking to escape Cuba for Miami, I think this film shows you (as background, not main story)the fragile multicultural stew and unity that Cuba has managed, and that will arguably be lost when Capitalism/Colonialism returns.

Shorn of the 60 year old blockade, Cuba will be able to get new cars, and new technology, and new infrastructure, but that comes at a very steep, and very historic price. It comes at the price of also accepting America’s and Capitalism preferred vices, of rule by division, and stratification based on color, and loss of cultural and local and familial touchstones and interdependence.

Cuba of the coming dawn, is poised to trade its minor corruption of getting a radio or tv, for the big time corruption of gentrification and rule by corporations. This debut film by Lucy Mulloy is a wonderful slice of Cuban Neo-Realism, and in its way as interesting as its Italian neo-realist forbears, such as the brilliant ROCCO AND HIS BROTHERS. 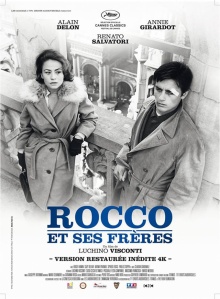 Get both movies here: