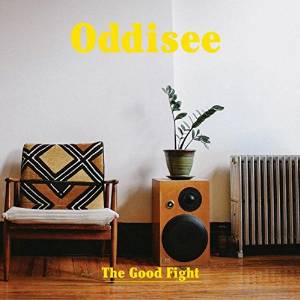 Oddisee’s THE GOOD FIGHT- After seeing numerous best of list in 2015 extolling Kendrick Lamar’s TO PIMP A BUTTERFLY I offer up THE GOOD FIGHT as a dissenting opinion. Good on any musician who can get accolades, but I’m of the mindset that the only thing good and creative about TO PIMP A BUTTERFLY is the title and that the actual album is juvenile and perhaps unnecessarily ignorant… to the point of stupidity.


There may be a positive message somewhere in TO PIMP A BUTTERFLY, but somewhere in the 15th N word this and F that, I became extremely bored. It was almost laughable, in that it seemed I was listening to a 14 year old that had just learned how to cuss and was doing it all the time, rather than an adult who should be able to put together a lyric or perhaps an entire song without the crutch of expletives.

And I know he is doing it because that is what his label wants him to do, what they want to sell to urban children as the extent of music, but it does a grand disservice to everyone.

It’s analogous to the comedian who goes on stage and does fart jokes, it may get a laugh or a chuckle when you’re a kid, just hearing it, but somewhere along the way you want more out of your humor than the lowest common denominator, You want wit, and perhaps a bit of wisdom. And the same for music, you get to the point where you want of your music, a bit of wit and wisdom.

THE GOOD FIGHT offers that bit of wisdom, delivered by a rapper with real skills and a social conscience, and the ability to sell his message without the crutch of constant cursing.

In any sane world you can not listen to the flow, the lyrics, the speed, the melody, the entire package that is Oddisee’s THE GOOD FIGHT and not rate it as not just the superior album by miles, but the superior performer. One is the work of an adult talking about you and me and the world striving toward better, and one is the petty ramblings about bitches and hos, not done particularly well.

The praise for TO PIMP A BUTTERFLY and the relative obscurity of THE GOOD FIGHT, perhaps indicative of a generation of children raised and sold on profanity over performance and mendacity over musicality. Well THE GOOD FIGHT is an excellent album for people raised on awful rap/gangsta ‘music’ to see what great Rap actually sounds like. Grade: B+.

Get your copy at the link below:
The Good Fight