“She loved me. That’s the root of the business. But she knew… she knew I thought more of my wife’s footprint in the mud, than I did of her body and soul.”
— A fantastic performance by Ciaran Hinds as Jim Browner, telling Holmes about the sister-in-law who connived to destroy his marriage, with tragic results. From THE MEMOIRS OF SHERLOCK HOLMES adaptation of THE CARDBOARD BOX.

The Memoirs of Sherlock Holmes Collection

In this age of streaming and Netflix, the DVD/Blu-ray is still the format of choice for those who want to do more than ‘see’ the movie, but explore it and enjoy it. I’m speaking of special features.

As a rule I don’t purchase DVDs/Blu-rays, unless it is a movie or series I intend to watch more than once. And as such a director’s commentary is an essential part of the DVD for a film fan such as myself.

I can watch the DVD once for the program, then go back and watch it for the cast/crew insights into the film. So that said, what are the best DVD/Blu-ray commentaries?

Best is a problematic designation, so let’s go with favorite… here are my 15 favorite DVD commentaries:

Robert Altman’s IMAGES/THE LONG GOODBYE- I put these two films together as one, because they are Robert Altman at his most experimental, and to my mind, while not his biggest or most lavish or most acclaimed films, IMAGES and THE LONG GOODBYE are his most interesting and stylish and surreal films (and they also sport two of the most amazing, experimental scores).

They are my favorite Altman films. And while endlessly watchable on their own, the excellent special features push them over the top. While not really a commentary, the films instead sport brief interviews with Robert Altman, but such informative and formative interviews. Altman gives a great insight into the division of labor between Director/Writer and Actor, and how as a writer a work is 2D, and it is incumbent on the actor and others to make it 3D, to bring it to life. Between the film and the interviews, it’s a class on film-making, for the price of a DVD.

Michael Mann and Tony Scott are two of my favorite directors, they make fantastic films, and their commentaries are full-on clinics in film-making. So just about any movie they make, I purchase as much for the commentaries… as the film. So you can easily fill a top ten or twenty list with just these two directors.

But for the sake of brevity we’ll limit each director to just one:

Michael Mann’s MANHUNTER [There are numerous DVD and Blu-ray versions of this film, but the link below is the only DVD that sports the Michael Mann DVD commentary.]
Manhunter (Restored Director’s Cut Divimax Edition)

[And as honorable mention check out Michael Mann’s COLLATERAL, from covering using the digital camera to the landscape of mercenaries, to the actors, it is just a riveting commentary. Collateral (Two-Disc Special Edition)

Another one of my favorite directors is Werner Herzog, and his commentaries are always things of high drama and art onto themselves. Everyone of his films are worth owning as much, and in some cases more for his commentary. Just a fascinating director, and a fascinating man.

Like Mann and Scott, every one of his commentaries could fill a best of list, but again for the sake of brevity we’ll narrow it to one.

Devil in A Blue Dress 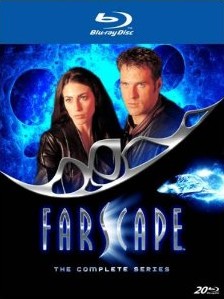 THE COMPLETE FARSCAPE- People who are fans of this show, a show that at its heart is this great love story, are fans because they are so connected to the characters that the actors and writers bring to life. Outside of possibly BABYLON 5, FARSCAPE is the most emotional and best acted show of the fantastic (Browder giving wrenching, award worthy performances). So the chance to reconnect with these shows, especially by listening to Ben Browder and Claudia Black, who obviously have as much chemistry off screen as they do on… is just a joy. Even lukewarm episodes of FARSCAPE, rare but they do exist, are made ‘must-haves’ by the commentary. A fantastic series, adorned with fantastic commentaries.