This self teaching thing… not going well.

Oh well, that’s a complaint for another post, this post I wanted to talk to you… about traveling.

I like to move. I like to… find in motion what was lost in space, to quote Tennessee Williams.

I like to find in motion, what was lost in space. 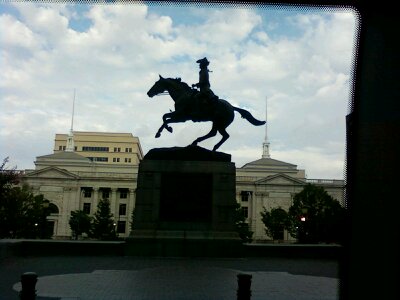 So most weekends I hit the train, or the bus. I could do the car, but part of traveling, is about sitting back, relaxing, watching the country at speed, reading, writing; all things you can’t do when behind the wheel and stressing in traffic.

So I get on the train or the bus, and I…find in motion what was lost in space.

Last weekend the seven or so hours on the road gave me a chance to read a book that has been on my to-read pile for sometime. Namely Richard Laymon’s THE WOODS ARE DARK. I’ll talk more on that later, suffice to say, the book defines page-turning.

A horror/thriller novel, the late Laymon has his share of writing issues in this book, with wildly inconsistent character behavior and actions (and these inaccuracies are both in the original and revised edition) but he moves the story along at such a pace that you don’t pause too long pondering the inconsistent, illogical, even nonsensical behavior of his characters. I was dragged along by his story all the way to the curt end. Flaws and all, it was a fun read and a recommended read.

But more on that later.

This weekend, I’m not sure where the road will lead me yet. I have an idea, but I’m not a huge planner, I never know until I’m on the bus, or the train, or in rare occasions the plane. I never know— until I’m in motion.

Finding in motion what was lost in space.

Three tentative books on the pile to finish up this weekend while traveling (when home I’m so busy doing, that reading can get difficult to make time for, so traveling is a godsend), the options are:

OMENS by Richard Gavin. I’ve read most of the stories in this collection, but I have two or so left. And a couple I wouldn’t mind rereading.

AS THE SUN GOES DOWN by Tim Lebbon

USE ONCE THEN DESTROY by Conrad Williams

I’ve read a couple stories from the last two books, really, really strong. All three books and writers share a thematic feel, the use of understated horror.

So yeah, looking forward to some good reading, which will translate to some reviews in the next couple of posts. And yes the MONARCHS OF MAYHEM revised Interview schedule will go up this weekend as well. So the death threats can stop now. 🙂

Thanks for looking, come back tomorrow and I’ll have some wacky pics or something. Till then be well and be good. 🙂