DEAL OF THE DAY: SPACE 1999 THE COMPLETE SEASON ONE BLU-RAY

I’m still not a Blu-Ray convert. I prefer the DVD form-factor, it’s more aesthetically pleasing to me than the cheap dinky Blu-ray Boxes. And often there is a negligible difference in quality, particularly when the source has issues, or the studio just cuts corners.

In short, all things being equal, I’m not paying more for Blu-ray. However in the cases where there is a substantive improvement in quality, and great special features, and the price is competitive with DVD pricing… well then I’ll pull the trigger.

Case in point SPACE 1999: SEASON ONE on Blu-ray. All reports point to this being an effective re-mastering and improvement on the DVD release. 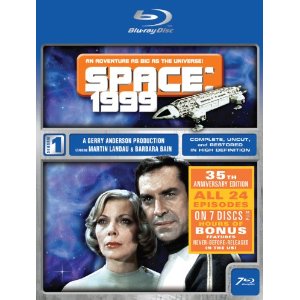 “It has been revealed that A&E Home Entertainment will release Space: 1999 – Season 1 on Blu-ray on November 2. No technical details are available, other than it will be a “complete, uncut and restored in high definition” release, in pillarboxed 1.33:1 video.

The series, originally shot on 35mm film, was restored [by] BBC studios, which posted a detailed description of the work done. The telecine was done from a new interpositive. Even with the new film elements, a great deal of grading was still occasionally required.

Dust and scratches have been removed in two stages. The first process is automatic, but the BBC emphasizes that it is important not to have it “too high”; otherwise, “an unnaturally flat and ‘plastic’ looking smeary image can result.” In the second stage, the Digital clean-up team, armed with pen and tablet, painstakingly removes remaining defects and areas of larger damage.

Also, the opening titles were rebuilt from the best available materials in HD.”
–Blu-ray.com 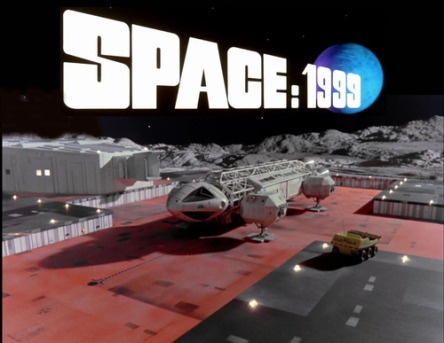 And currently priced at 52% off it’s a no-brainer.

It’s only going to go up in price, just like the BABYLON 5, DEEPSPACE 9, and FARSCAPE sets I notified you of.

A great series, now remastered to look better than it ever did when broadcast. SPACE 1999! Our past and our future— has never looked so good. So get your copy today!