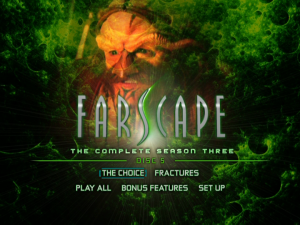 I just finished watching the season finale of FARSCAPE Season III, the episode entitled DOG WITH TWO BONES. In many ways the episode starts off with everything that has been wrong with season III, the meandering, unfocused, and often forced nature.

That said that ending of this particular episode is absolutely FANTASTIC! Much like the first season the creators draft this finale, not knowing if there would be a 4th season, and what an audacious, ballsy, and just absolutely merciless cliffhanger to end the season, and arguably the series on. Absolutely brilliant ending, that makes you shout at your tv!

Can you imagine how this hit people seeing this cliffhanger and not knowing if there would be a 4th season. Just takes a huge amount of gall, and balls to do something like that. And it helps an otherwise lackluster season go out with the audience definitely wanting more.

I just wish the writing could be strong throughout the episodes and the seasons, rather than just being impressive for cliffhangers.

But thankfully I have the whole series on DVD, so season 4 here I come!!