Here’s a quick review of Mark Millar Swamp Thing issues from 15 years ago.

A few standout reads when he sticks to self contained stories. 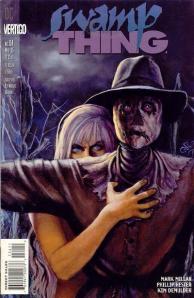 153- The 2nd Part of the River Run storyline, is like all the parts easily enjoyed without reading the others. SWAMP THING is lost between worlds, stumbling from Earth to Earth in an attempt to save the soul of a young writer. In 153 we are introduced to a world where Germany won World War II, and Marilyn Monroe is the wife of the new Fuhrer. It’s an interesting stand alone story, nothing that will amaze, but a solid read, and Chris Weston does a solid job on art. The letters page BAYOU RHYTHMS contains mostly praise for issues 149-150. B-.

154- Sees the return of the art team of Phillip Hester and Kim Demulder, bringing their A game in what amounts to a really fantastic issue of Millar’s run, “THE BAD SEED”. It’s a really quite creepy and disturbed issue. Strong recommendation. A great issue. B+.

155-It took me a couple attempts to actually finish this issue, I’m not quite sure why, but once done I have to say it was quite a great issue. An earth with a familiar Solomon Grundy, and a hero to face him, and the secrets that lie in Slaughter Swamp. Really quite well done, with great art by the team of Hester and Demulder. B+.

156- Sees the paper quality go up dramatically over the newsprint seen in the previous issues and this really makes the art/colors pop off the page. Add to this the art is by Phil Jimenez, definitely channeling the great work of Totleben and Bissette from the glory days of the series, and it looks gorgeous. The best work I’ve seen from him. I love to see an artist play with the layout, panel compositions, textures, it just makes the story come alive. And Kim Demulder does a great job inking, add to that Millar is telling a fantastic story of a world where Alec Holland has not yet become a… Swamp Thing. Great issue! B+/A-.

157- “The ugliest person in every relationship has to be the breadwinner.” That line alone makes me love this issue. :)While it doesn’t stand on its own as a self contained story like the previous issues what is there is page turning good. Have you ever received a chain letter? What did you do with it? This is the story of a comic book writer who may have done the wrong thing with it. B+. Nice thoughtful letters on issue #153 topic of fascism run rampant.

158- This is the wrapup to the RIVER RUN storyline that has been running, and its pretty uninspired. The story is really underwhelming, and undeserving of the issues prior. And Phillip Hester’s art here is very uninspired. He is given a splash page to make the Parliment look awe-inspiring, and they look like nothing much at all. The Fantastic is obviously not Phil Hester’s strength. All in all a very poor issue. D-/F.

159-Mark Millar follows up one of his worst issues on the title with one of his best. A great stand alone story (it’s obvious that’s where Millar’s strength is) about a boy and his lost dog, and a most exclusive men’s club. The art is by Jill Thompson who is very welcome after the abomination of the last issue. Really entertaining issue. B+/A-.

160-161- Could not get into these two issues at all. Lot of exposition for expositions sake.

That’s all for this installment.