On the graphic novel front, Grant Morrison continues to be hit and miss. His BATMAN:RIP being a definite miss. It’s unreadable, part of this is largely the art by Tony Daniels that seems to have very little to do with the words actually on the page. I found it not interesting enough to finish.


Now that said, Morrison’s BATMAN AND ROBIN, the graphic novel covering the first half dozen issues, brought to life by the fantastic, stylish, and more than a bit disturbing art of Frank Quietly is amazing. 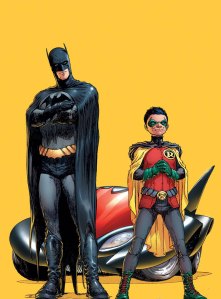 “Well to begin with, it’s Frank Quitely. This is certainly looser than what he was doing on “All Star Superman.” There was more control on that book, because we wanted it to be more like Superman. So it was all very controlled, very measured. The “Batman & Robin” stuff is more brazen. And he’s producing things like sound effects, because nobody does sound effects anymore. Everybody has given up on them, so what we’ve done is incorporate them into the artwork. When someone hits water, the water rises up and makes the “splash” effect. It just looks fantastic.


Again, it’s much more playful than “All Star Superman,” which was more classical and maybe more restrained. This is more wired.”– Morrison discussing Quietly’s art on BATMAN AND ROBIN

Morrison bringing his A game, creates an unsettling tale of this new Dark Knight’s baptism, and a new breed of monsters that he, and the new Robin… must face. A great, great book. Looking forward to future volumes. A-.