I had mentioned in a previous post some films that you wouldn’t see at a Theater near you, this review is about one such film.

Typically films that don’t make it to your local multiplex, are looked over for reasons having to do with economics of course, but also for less quantitative reasons. Reasons that can best be defined as… a belief in preserving American cultural ignorance. Movies that should make it to theaters but don’t, stagnate largely because Hollywood not only knows how to sell you the staus quo, particularly when it comes to characters of color, but is most comfortable doing just that. The MGM lion, 86 years later, is still surrounded by laughing sambo faces afterall.

So when I get a chance to see a film that has been kept from a larger audience, I am always very enthused. The chance to stumble across a CAPPUCCINO or an EL BENNY and introduce it to others is something I actively seek out. Something I take some… honor, in doing.

One of these hidden films, HARIMAYA BRIDGE I recently got the chance to see in full, thanks to the great folks at ELEVEN ARTS.

It was necessary to sit through HARIMAYA BRIDGE twice for this review. As my initial reaction to it was both odd and conflicted, and I thought this movie, particularly considering the cast, deserved as full a screening as I could give it.

Deserved both a full viewing from me, and a fair and full review. I hope to bring that to you below:

HARIMAYA BRIDGE is a beautiful film. We have to begin there, because that truth is what first struck me. It is a film of pauses and fragments, stillnesses and loss. I was quite enamored of the beginning of the film. Aaron Woolfolk showing early a clear eye and a steady hand. And patience.

Unfortunately these necessary traits of the filmmaker are lacking to a troubling, and for me, an unnatural degree in the lead character, Daniel Holder played by Bennet Guillory.

Rarely does a single character color completely my feelings on a film. That happened here, with this film. With Guillory’s Daniel Holder.

Around the 40 minute mark I just couldn’t take anymore of the lead character. He was just too much of an obstinate, arrogant character.

We get into some minor specifics here, nothing standout or essential I think, but if in doubt just jump down to the last couple of paragraphs for the wrapup.

Holder’s character comes to Japan… to take away gifts. I mean seriously taking away gifts?! Really? Who does that? He also manages to call Japanese soldiers evil and is incapable of understanding why they, the Japanese, would revere their military dead as much as any nation. And he spends much of the movie lurching around Japan like a Bull in a China shop, seemingly oblivious to tact, or manners, or common decency, or simple humanity. I mean I get that the whole point of the story… is for the character to have this redemptive arc, but I just felt it was a way too heavy handed and unsubtle film.

I thought it was crafting the character from a false state of melodrama and idiocy, to get to a payoff of reconciliation and understanding.

And that never works, The destination never rings true, if the character fails to ring true.

And the character of Daniel Holden played by Bennet Guillory fails to ring true. I find him, for too much of the movie, a thoroughly ignorant and detestable character. Around the 80 minute mark the Holden character begins to show some humanity and character growth, but it is a case of two little too late. It takes him 90 minutes to come to a conclusion about the paintings that we all see coming 70 minutes ago.

Life is too short for me to spend time with characters I detest in the hopes of getting to like them in the fourth quarter. No thank you. Not my cup of tea. And I’m not saying a film has to be filled with nice characters, but whether good men or bad, I have to believe in their reality, the reality of their viewpoint and stance for me to stick with a film.

I didn’t believe this film.

I like the look of the film, it looks beautiful, and I generally like Woolfolk’s pacing but I think the whole premise of the story, and the near caricature of ignorant bigoted stupidity the father is, is just that, too much of a caricature.

I mean the protagonist stance/views would have been more valid in 1959, in the shadow of World War II, but filmed in 2009, the film just comes off as very late to the game, and slightly dishonest. Particularly considering in 2010 there’s not a city in the US, that doesn’t depend on Japan for their cars, tv, electronics, movies, and much of their jobs.

So for someone to be oblivious to Japan having respect for their dead soldiers in 2010 comes off as utter bs. The character has to be both a moron and a bigot, and that’s not someone I want to waste precious minutes of my life, watching a film about.

So yes, this film has been done by Hollywood, the coming to terms with Japan and World War II many times, only thing is those films were all done between 40 and 50 years ago.

The performances of just about everyone else in the film is great. Misa Shimizu as Yuiko Hara is astonishing, and carries much of the film’s humanity. She is the only thing making the more obnoxious scenes with Daniel Holder’s character remotely palatable. And Danny Glover is always great, and here as the elder brother Joseph Holder, is no exception.

And it touches on themes of Identity and Miscegenation, that is rarely touched on in Japan, outside of the mature films of Takashi Miike. Miike films such as BLUES HARP, CITY OF LOST SOULS, THE BIRD PEOPLE IN CHINA(one of my favorite films) and his BLACK SOCIETY TRILOGY. 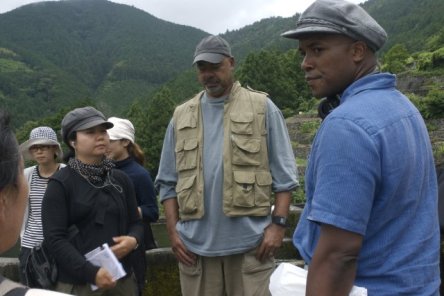 However HARIMAYA BRIDGE hinges on following the central protagonist of Daniel Holder, and if you find him a detestable human being for nearly an hour of the films running time, regardless of how you try and do a Scrooge redemption at the end, for me it is too late, Because I’ve soured both on the heavy handed character, and the film that also now feels heavy-handed (one of the flaws with the aforementioned BLUES HARP).

So the film becomes more like a chore to finish, than what cinema ultimately should be, a joy to follow to the end. Bennet Guillory is a strong, imposing presence, and I believe a talented actor, unfortunately the script gives him too little chance to do anything beyond portraying the obstinate and culturally ignorant Black man.

I think Woolfolk is a talented filmaker, in his use of silence and quiet. And I can not stress enough, how absolutely beautiful this film is. Much praise of course must go to cinematographer Masao Nakabori, who grants the film a lush and timeless look, befitting such a fragile and full fable.

I just think the film was severely hurt by the extended and unsubtle portrayal of the protagonist through too much of the film. The film begins strong, and ends strong but the middle is frustrating and unlikeable. I think you could have easily brought this film in at 90 or even 80 minutes, lose a lot of what I disliked in the center, and had a far stronger film.

I definitely would like to see more from Woolfolk, hopefully something far less… forced. Less CRASH like. Overall I have serious issues with HARIMAYA BRIDGE as a whole, but if you can fast-forward through some of its more forced conflict and dialog, it is worth a look.

Indeed I started this review feeling one way about the film, not sure if, given my issues with it that it would be something I would want to add to my DVD collection. But I find it… sticks with me. Some of its images. There’s a lovely bit of stillness that happens particularly in the beginning, something reminiscent of Beat Kitano’s languid static shots, while being its own animal. And for that, quiet filmmaking, it earns a place on my shelf when eventally available on DVD (Check with the distributor ELEVEN ARTS for if and when that happens).

I said at the beginning I was conflicted on this film. It is a flawed film but, in its defense, what works in it… works exceptionally well. And based on this debut, I am looking forward to what the future brings from this Director, as well as from Distributor ELEVEN ARTS.