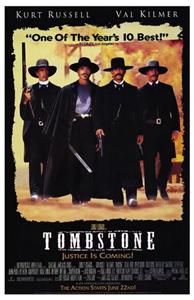 I love the film TOMBSTONE. A lot of people will bring up UNFORGIVEN and OPEN RANGE (both phenomenal movies) as the best western made in the last quarter of a century. They’d be wrong. Here in this operatic retelling of the Wyatt Earp legend, a troubled production and warring behind scene forces manages to somehow gel into a film that is far more than the sum of its parts. All hands, particularly Kurt Russell and Val Kilmer turning in career defining performances, in a film that is at once action, drama, romance, and definitive western.

But this film for all its power and all its greatness, owes its beats, to John Sturges and his two great Earp Movies of an earlier age. GUNFIGHT AT THE OK CORRAL and THE HOUR OF THE GUN.

The first, GUNFIGHT AT THE OK CORRAL (starring Burt Lancaster and Kirk Douglas) being the superior movie. Being all around stronger than its sibling HOUR OF THE GUN.

GUNFIGHT offers better pacing, great direction, stirring score by the legendary Dimitri Tiomkin, and two great actors ripping the screen apart (particularly Kirk Douglas in an endlessly re-watchable performance). HOUR is the joyless, more accurate follow-up, grim and mirthless and overlong. A sprawling, languid tale of vengeance that stars James Garner of ROCKFORD FILES fame. Garner is too one note in this film to be likable, but a compelling storyline nonetheless… familiar to anyone who has watched TOMBSTONE… carries the film through.

TOMBSTONE mixes the two Sturges films and tightens them, strengthens them, to produce a film superior to its inspirations, and exceeding all expectations.

John Sturges… one of the great directors of westerns (from great unknowns such as THE WALKING HILLS to universally acclaimed films such as THE MAGNIFICENT SEVEN), understood the morally ambiguous nature of human existence, the morally complex nature, and was one of the first directors working in the black and white field of westerns, to explore the grey, ala Anthony Mann, while still maintaining a sense of the mythic and larger than life, ala John Ford. His films possessed a unique duality, a sensibility that very much informs the best of films made today.

TOMBSTONE being one of those best. And in celebrating TOMBSTONE it is also a celebration of the direction and films of John Sturges.