I just became aware that Arnold Drake has died. Through Chris’ COLLECTED COMICS LIBRARY Podcast of all places. I had a piece about meeting him at the NY Con that I haven’t yet posted on my blog.

But real quick I want to say this:

I stood in front of Mr. Drake and spoke to him a little less than 3 weeks ago at the NY Comiccon. I sat in on his panel, this legend, and watched as people walked out of his panel, and idiot Hotel workers/ security(?) talked through his panel, and the noise from Quesada’s obviously flooded panel next door… inundated his panel.

I listened to Marvel Zombies in the other room scream, while this living legend… spoke of an age that gave birth to Marvels.

I was with 7 or 8 others when the walking out was done (the room had maybe 12 people in it when I came in, only about 8 or 10 minutes into the presentation), and I sat there listening to Mr. Drake speak of the Doom Patrol, and creator rights, and blacklists, and getting grief for selecting artists of color to work with, and Stan Lee and Marvel. 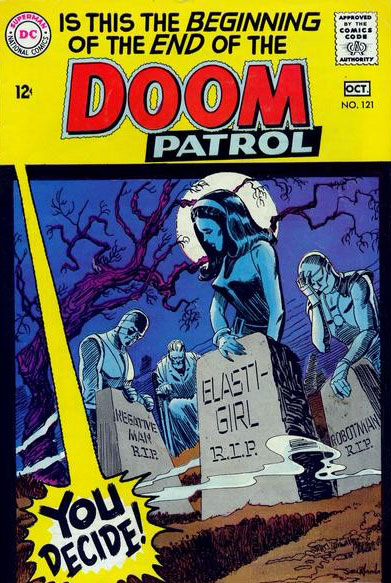 He spoke (with some humor, no venom, no agenda, just matter of fact anecdotes)of Stan Always quick to “pay homage” 🙂 to his creations, such as Drake’s misfit team of characters led by a wheelchair bound professor, that was soon followed by an eerily similar team out of Marvel.

He spoke of the transition of Deadman from him to Neal Adams, and how he felt Neal (A brilliant artist, and you got the sense respected peer) thought he didn’t get Deadman. But Mr. Drake points out that Deadman’s story was really the lives of the people he jumped into, and how that and not the hunt for a one armed man is where the real character arc should have taken place.

He spoke of great artists he had worked with, and his thoughts on the growing acceptance of comics by the mainstream.

An obviously erudite, positive, very sharp elderly man, with a brilliant recall. I can barely remember last week, and this gentlemen remembered clearly the heyday of his comics work. A fascinating, fascinating panel.

With a brilliant moderator, (was that Mark Evanier?) who worked through the interruptions, kept the mood light and fun, played to the small crowd, asked insightful questions of Mr. Drake, and was quite rightly laudatory to Mr. Drake. And to the credit of those of us who remained, we followed suit… we asked brief, insightful questions, and listened attentively.

Arnold spoke of his upcoming Doom Patrol book he was working on, (I’m sorry the artist’s name escapes me), and was asked about the DeadMan, movie, and spoke a little about how he was looking forward to it, and liked Del Toro’s work.

I got the sense, he was a man, very much on the cutting edge of what was happening, and always looking forward, which is a rare thing for a man of any age. He closed the panel, and left everyone there looking forward to his upcoming work.

And when the panel was over, I walked up, waited patiently as they helped Mr. Drake down, and got the chance to say to him: ” Hi Mr. Drake, just wanted to say I’m a huge fan of yours”.

To which, this ailing but very sharp gentleman said ” Well I’m a fan of yours too. I’m a fan of anybody whose a fan of me :)” . We both smiled, and his wife (?) helped him away.

I also turned to the moderator (Evanier?), and expressed what a great job he did. I think he really appreciated that. I know I did.

Interruptions aside, he provided a great forum, for the creator and his fans. I appreciated being able to thank a person who was a big part in creating a medium I get more than a little joy out of.

It was a criminally under-attended panel… But a great panel none-the-less. My best wishes go out to the Family and Friends and Fans of Arnold Drake.